Turkey ready to support Africa on all platforms 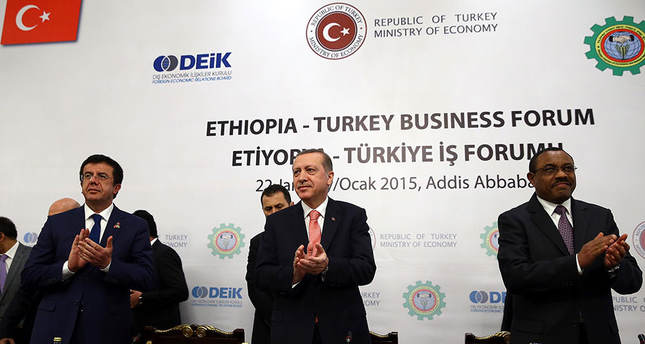 by Serdar Karagöz Jan 22, 2015 12:00 am
Speaking at the Turkey-Ethiopia Business Forum, President Recep Tayyip Erdoğan said that Turkey is trying to build not only commercial and economic ties with Africa, but also, as a country aware of Africa's problems and its potential, wants to support African countries "in all platforms."

He underlined that they want to improve relations with Ethiopia in order to compensate for the 10-year gap in relations, when the government's latest Africa initiative program was implemented. Erdoğan said that the program was successful and that now ties that have been established need to be strengthened by taking mutual steps. Erdoğan said that with its potential and human-resources, and as the host of the Organization of African Unity, Ethiopia is the center of the continent.

Claiming that the trade volume between Turkey and Ethiopia has reached $421 million as of the end of 2013, Erdoğan said that while there would be a decline in figures in 2014, as the data collected in the first 11 months of 2014 indicated, the trade volume will remain around the $400 million mark.

"Our target is to increase the trade volume to $500 million since both countries together have a population of around 173 million, which means there is a very high potential for trade. We have to start working towards signing an Economic Partnership Agreement to establish a free trade zone as the leading economic actors in the region," said the President. He said that such matters were discussed during the meeting and Ethiopia is among the African countries that Turkey invests the most in, with investment figures reaching around $3 billion. Erdoğan further said that he is happy about the situation for Turkish investors, whose reputations have gone up after their work in Ethiopia.

He further said that 14 projects, working out to about $2.5 billion worth of invest, has been assumed by Turkish firms and the most important one of these projects was the Avas-Veldia Railway Project, which when completed will be one of the most important achievements of the Turkish construction sector.

President Erdoğan also called on Turkish businessmen to invest in Ethiopia and said "There is a country that invites you sincerely and is ready to make things easier for you. I want you to do business here in harmony with the Ethiopian people, while taking into consideration the circumstances of the country. I believe our cooperation will be developed strongly." He further gave examples from the areas available to invest, like building hydroelectric power station, potable water installation, solar power, geothermal and agriculture, which Ethiopian Prime Minister Hailemariam Desalegn promised to assist Turkish businessmen with and provide land for.