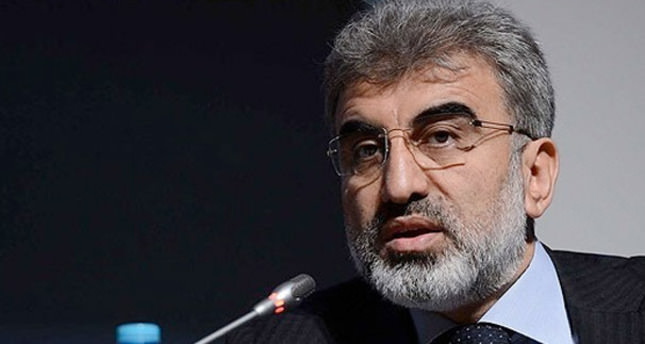 by Daily Sabah with Agencies Jan 24, 2015 12:00 am
Energy and Natural Resources Minister Taner Yıldız announced that royalties are being banned in coal mining except public sector. The minister organized a press meeting to reveal the details about the new "Mining Bill" and the decisions of Parliament's Energy Commission. The royalty system, which has been highly criticized since the Soma mining accident last year that claimed the lives of 301 miners and also the one in Ermenek, will now be prohibited in all sectors expect public. Yıldız noted that the amendments required for the Mining Law had been presented to the Prime Minister's Office two weeks before the Soma mining accident; yet, such accidents revealed that new amendments are required.

"Our ministry has closed 101 underground mines so far, and we will continue to be sensible about inspections. For example, the mine in Ermenek could not pass inspection, as it had unfit production conditions. Even though it had been renovated after the accident last year, the mine was still shut down," said Yıldız. He further announced that technical supervisors, which were meant to visit the mines and audit them on a regular basis, would not be replaced by permanent supervisors assigned for each mine.

The new bill also changes conditions for issuing licenses for mines. Now, depending on the type of mine, some licenses will only be granted through a tender process. Further, there are amendments related to licenses fees according to the new bill -- mostly related to environment-friendliness.

Yıldız also announced that from now on the financial capability of companies undertaking prospecting will be examined. The bill also introduced changes related to state's rights, mostly expanding the state's rights in metal mines and also metals like gold and copper, which are traded on many internal stock exchange markets. "Further, a gradual state's right system is being introduced. For example, if the price of a metal mined in Turkey has increased on the London Stock Exchange Market, then we will require a higher state's right; if it has decreased, the state's rights will be less," explained Yıldız.

The new Mining Bill also includes new regulations about reservoir mining, which had drawn criticism after the Ermenek mining accident. One of the most crucial regulations introduced by the bill will be the cancellation of royalties in coal mining: From now on, private companies will not be able to obtain rights to a mine and then transfer them to another company for higher amounts. With the new bill, whoever obtains the license will also have to operate the mine; therefore, the public sector will only share coal mines, underground resources and treasures with those willing to operate them properly, otherwise such resources will not be granted to private sector companies.

Further, from prospecting to operating all processes will be reported, and in terms of hiring, the requirements and qualifications to be requested from employees have been increased.