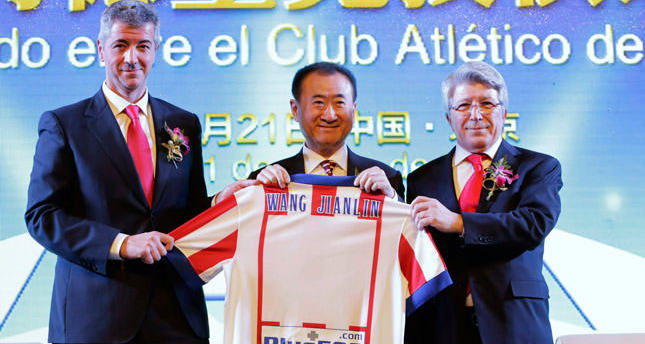 by Daily Sabah with AFP Jan 25, 2015 12:00 am
Chinese multi-billionaire Wang Jianlin's purchase of a 20 percent stake in Spain's reigning football champions Atletico Madrid is the latest in a series of overseas acquisitions by one of the world's richest football fans. Wang's sprawling Wanda Group has previously bought up US cinema chain AMC and British-based yachtbuilder Sunseeker, along with another Madrid landmark, the Edificio Espana skyscraper. He made his fortune in property. But with China's real estate sector facing headwinds he has been looking to diversify, turning to culture and tourism as the firm's new growth drivers and expanding into film production, theme parks, print media and art investment. And while Wang's 45 million euro ($52 million) Spanish acquisition may represent the first mainland Chinese investment in a top European football club, he is no stranger to the sport. According to Spanish daily El Mundo, Wang is an admirer of Atletico's Turkish midfielder Arda Turan. El Mundo wrote, "When asked who is your favorite footballer in Atletico Madrid, the Chinese businessman answered unhesitatingly 'Arda Turan.' It's natural."

The 60-year-old is a diehard football fan and Wanda Group greatly increased its profile in China after Wang bought a Dalian football club in 1994, renamed it after the firm, and transformed it into the strongest team in China. But Wang sold Dalian Wanda in 2000. He was said to have become disillusioned with widespread corruption in the Chinese game at that time.

Wang topped the Forbes China Rich List in 2013 with an estimated net worth of $14.1 billion. He was displaced last year by Internet entrepreneur Jack Ma, although his wealth will have been boosted by the flotation of a Wanda subsidiary in Hong Kong last month. Wang himself owns more than 98 percent of Wanda Group.