Turkey to invest in fellowship in Somalia and Djibouti 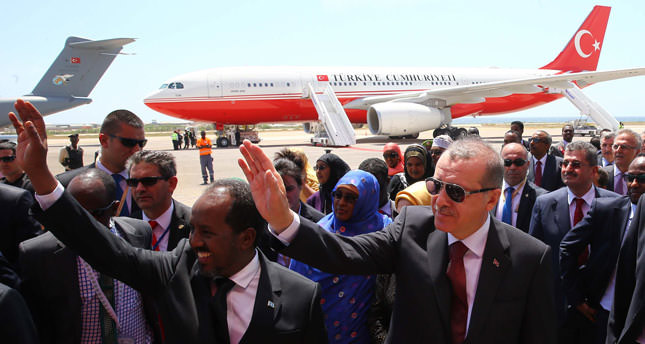 by Serdar Karagöz Jan 25, 2015 12:00 am
President Recep Tayyip Erdoğan visited Somalia and Djibouti on the weekend where commercial cooperation and investment opportunities were discussed. Erdoğan attended the opening of the terminal building of Mogadishu's international airport and the Somalia-Turkey Education and Research Hospital, both of which were completed with significant Turkish contributions.

After the opening ceremonies, Erdoğan and his Somalian counterpart Hassan Sheikh Mohamud held a press conference in Mogadishu, the capital of Somalia. The Turkish delegation signed cooperation agreements in the fields of youth and sports, maritime transport, defense industry. "These are the signs of the new chapter," said the Turkish president.

THY to fly to Somalia everyday

Turkish Airlines starts to fly every day from now on, according to Erdoğan's announcement and Mogadishu's international airport creates employment for 300 people and serves 5,000 passengers per day. Turkish construction company Albayrak, which had taken over the management of the Mogadishu seaport, carries out the modernization works of the port. "The Mogadishu seaport is located in a very strategic location and is a significant income source for the Somalian government," said Erdoğan and added that a winch now works for the big container port and one will be added in February which will increase the port's activities.

Turkish companies also completed a road which connects the airport with the city. "We serve our Somalian brothers, we didn't cause trouble," said Erdoğan which he explained is a necessity of brotherhood. The Somalian government assigned an 80,000-square-meter area for the Turkish Embassy, where a new 10,000-square-meter service building is being built. Erdoğan stated that this is going to be one of the biggest Turkish Embassies in the world.

Changing the appearance of Somalia

President Erdoğan stated that one of the projects will be housing construction, in accordance with city planning. First, 10,000 houses ranging in size from 45 square meters to 85 square meters will be constructed. The houses are planned to be completed in two years.

President Erdoğan announced that the commercial cooperation with Djibouti will be enhanced and requested that Turkish businessmen search for more investment opportunities, especially in the energy, water, health and education fields. Erdoğan made his first official presidential visit to Djibouti and held a press conference with Djibouti President Ismail Omar Guelleh. Erdoğan underlined that the economic relations between the two countries at around the $65 million mark is not yet fulfilling the actual potential.

The first step in improving relations will be the restoration project by Turkish Cooperation and Coordination Agency's (TİKA) Program Coordination agreement for restoring historical artifacts in Djibouti. Further, Erdoğan announced that they have offered to increase the number of Turkish Airlines flights from seven to 14 per week.

The Turkish President announced that during the visit, eight agreements have been signed, one of which was between the state television network of Turkey and Djibouti. Agreement for establishing an exclusive economic zone and cooperation agreements in youth and sports, maritime, police training and safety fields were among the other agreements signed. Erdoğan also announced the plans for establishing a boutique hospital in Djibouti and further stated that, the Turkish government will strive to increase the number of students currently studying in Turkey to from 65 to 100. "We will also be sending three to five fully-equipped ambulances and automated garbage trucks," added Erdoğan.

Addressing representatives from the business world at the closing meeting of the Djibouti-Turkey Business Forum, he noted that Turkey and Africa needed to not only be united in terms of trade and economy, but also strengthen their fellowship. "We have always sided with Africa in every platform and will continue to do," said Erdoğan.

Turkish Foreign Affairs Minister Mevlüt Çavuşoğlu accompanied the Turkish president during his visit and held meetings with the Djiboutian Foreign Affairs Minister Mahmoud Ali Youssouf. Çavuşoğlu, who underlined the significance of the projects undertaken by TİKA in the country, stated that cooperation and collaboration especially in energy, water, health, infrastructure and training headlined the topics discussed in the meeting. Turkey's support for training Djibouti's security forces and further cooperation in tourism were also among the matters discussed by the ministers.