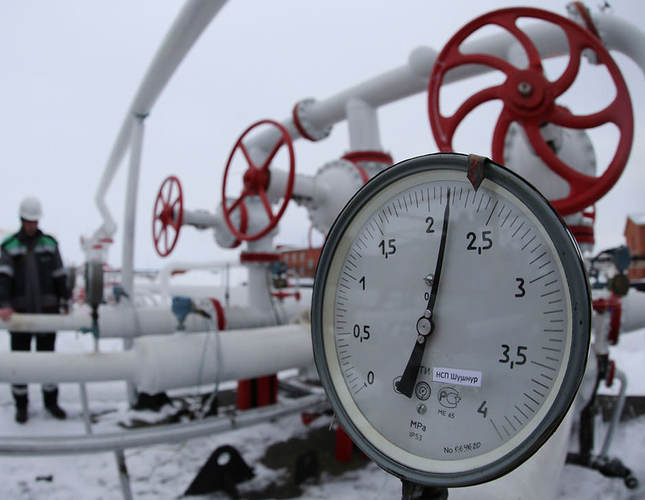 by Daily Sabah with Agencies Jan 30, 2015 12:00 am
Falling oil prices create deep effects on companies and employment in the sector. Royal Dutch Shell PLC, Europe's largest oil company by market value, announced yesterday that fourth quarter net income fell 57 percent to $773 million, and that it would cap spending this year in response to falling oil prices, while Russian state-owned natural gas giant Gazprom said its third quarter profits plunged 61 percent as supplies were suspended to Ukraine, one of its main customers. Meanwhile, Goldman Sachs stated that due to the decline in crude oil prices since last year June, 70,000 people may become unemployed in the energy sector. The price of Brent crude dropped about 50 percent last year.

Shell is one of first big producers to report earnings since the recent plunge in oil prices, so the results are likely to set the tone for its peers. Fourth quarter earnings on the current cost of supplies basis, which excludes the impact of changes in the oil price on inventory, rose 93 percent to $4.2 billion. For the year, such earnings rose 14 percent to $19 billion. Chief Executive Officer Ben van Beurden said Shell's efforts to balance growth and returns had positioned the company well to handle the decline in prices. While lower oil prices and last year's divestments are likely to reduce this year's cash flow, the company must be careful not to "over-react." "We plan to cap our organic 2015 spending at 2014 levels, retain flexibility for both opportunistic, incremental plays and to further reduce spending should market conditions warrant that step," he said in a statement. On the other hand, Russia's Gazprom net profit was down 35 percent in the first nine months of 2014 compared to the same period in 2013, the company announced Thursday. "The amount of profit for the period attributable to equity holders of OJSC Gazprom for the first nine months of 2014 amounted to 556,254 million rubles, which is 302,519 million rubles, or 35 percent less, than the same period during 2013," the company said in a press release. Shareholders' gross profits declined by approximately 39 percent compared to 2013, and Gazprom's net debt was up 14 percent. The report cited the ruble's recent fall in value as a factor behind this increase. "Causes of the increase in value of this index are linked to the growth rate of the U.S. dollar and the euro against the Russian ruble, which was partially offset by an increase in cash resources and their equivalents," the report added.