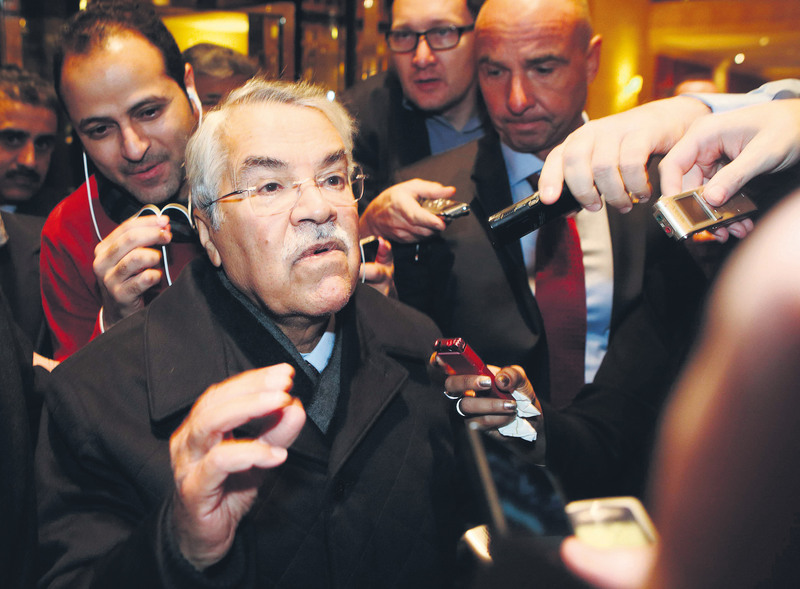 Saudi Arabia's oil minister said yesterday he expected oil prices, which hit a near six-year low in January, to stabilize with the help of non-OPEC producers, signalling optimistism about the market outlook

Giving a speech in the German capital yesterday, Saudi Arabia's oil minister Ali al-Naimi also urged non-OPEC producers to help balance the oil market, saying it was not up to Saudi Arabia to subsidize higher-cost producers and that circumstances required non-OPEC to cooperate. "Going forward, I hope and expect supply and demand to balance and for prices to stabilise," Naimi said. "Global economic growth seems more robust."
The comments are a further sign OPEC's top producer is sticking to its policy to defend market share. Last month, Naimi signalled satisfaction with developments, saying he saw oil demand growing and that markets were "calm". Oil was trading just above $60 a barrel on Wednesday, up more than 30 percent from a near six-year low close to $45 on Jan. 13. Prices collapsed from $115 in June due to oversupply, in a decline that deepened after Saudi Arabia and the rest of the Organization of the Petroleum Exporting Countries at a November meeting refused to cut output.

At the meeting, Saudi Arabia and its Gulf allies argued that the group needed to ride out lower prices in order to defend market share against higher-cost shale oil and other competing supply sources, rather than cut output. Officials from Russia and some other non-OPEC nations held talks with OPEC ministers on the sidelines of the meeting. But no agreement on cutting supply was reached, OPEC left its output steady and prices fell further.
Oil's drop has hurt smaller OPEC members and hit Russia's economy hard. Some in OPEC continue to lobby for output cuts and an emergency OPEC meeting, and last month Igor Sechin, the head of Kremlin-controlled energy giant Rosneft, criticised OPEC for destabilising the oil market. But Naimi on Wednesday said Saudi would not act alone and he was not aware of any plans for a special OPEC meeting. The next OPEC meeting is not until June. "In cooperation with many countries we have moderated production levels to improve the market situation. But now the situation is different. We need every major producer to cooperate," he said. "It makes absolutely no sense for the most efficient producers to be the ones to cut production when we are only 30 percent of the producers." He defended OPEC's November decision and said Saudi Arabia would not cut its output unless buyers asked for less. "In November, OPEC made an historic decision, it did not interfere in the market. I think history will prove that this was the correct path forward," he said.