New railway projects to be initiated in 2015 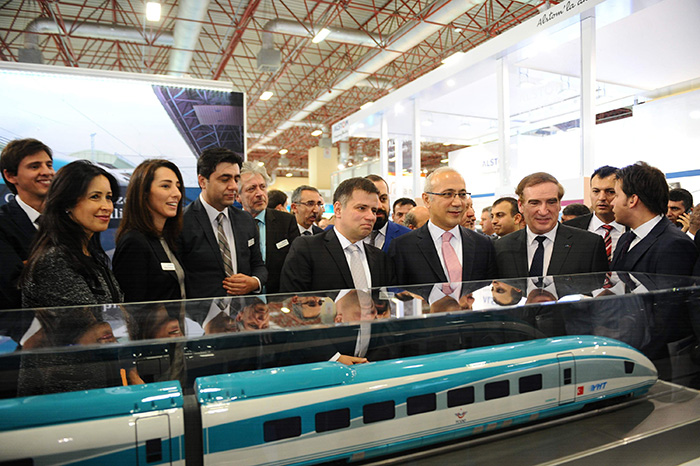 by Daily Sabah Mar 05, 2015 12:00 am
The Kars-Tbilisi-Baku railway line will be opened this year, announced the Minister of Transport, Maritime and Communication, Lütfi Elvan, while inaugurating the fifth International Rolling Stock, Infrastructure & Exhibition of Eurasia. Elvan pointed to other major projects that will also commence this year, including the high-speed railway line that will connect the Adana-Mersin route to Khabur.

The fair, which is the third largest of its kind in the world, was attended by a total of 300 companies, 142 of which were foreign from 25 countries including Germany, Russia, France, Iran, Italy and the Czech Republic.

Touching on investments in railway lines across the country, Elvan said that work on the Ankara-İzmir and Ankara-Sivas high-speed railway lines is underway, and the 60-kilometer-long railway line that will connect Bursa to Eskişehir-Istanbul route is being constructed.

Elvan also noted that industrialists in Central Anatolia will be provided with access to Mediterranean ports via a line that will connect Anatolia to Adana and Mersin passing through Konya, Karaman and Ulukışla. "It is likely that the Konya-Karaman line will be completed in a period of eight to 10 months," Elvan added.

In reference to the liberalization of the railway lines, Elvan stated that studies on the matter have been completed by receiving opinions from relevant non-governmental organizations. With the steps to be taken toward liberalization in the upcoming days, a more efficient and faster mechanism will be established.

According to Elvan, the infrastructure of a total of 332-kilometers-long railway line will be completed and brought into service in 2015. Another major project concerns the Kars-Tbilisi-Baku railway line, which is expected to re-invigorate the historic Silk Road, and investigations are still continuing uninterruptedly despite winter conditions. "Hopefully, by the end of this year, we will open the Kars-Tbilisi-Baku railway line and will offer it not only to our own people, but to the people of Europe, Central Asia and the Far East," Elvan said.

Hosting the opening ceremony, Korhan Yazgan, the chairman of Türkel Fair Organization Company, said that Turkey functions as a bridge in connecting railway lines, adding "Our fair has become the most importing meeting place for the sector in Eurasia." According to Yazgan, the fair is expected to host 300 participants from 25 countries and 30 prominent speakers from nine countries. It has attracted more than 10,000 domestic and foreign participants and official delegations from 26 countries.

Until recently, Turkey was an importer of railway technologies. However, with foreign partnerships and purely domestic-capitalized investments, Turkey has become a center of railway lines, Yazgan concluded.
Last Update: Mar 05, 2015 5:25 pm
RELATED TOPICS