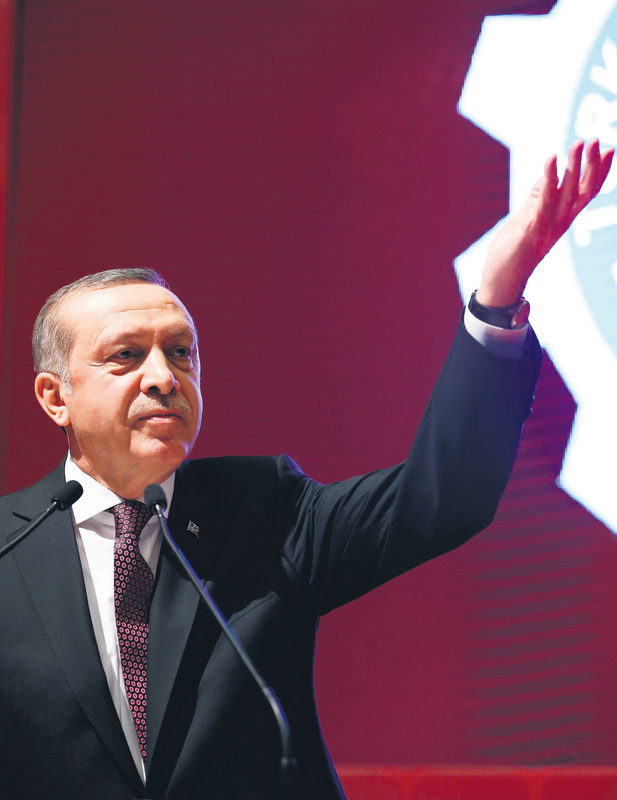 by Daily Sabah Mar 07, 2015 12:00 am
President Recep Tayyip Erdoğan claimed that people who are investing in the dollar right now might soon suffer losses. Erdoğan replied to questions from reporters about whether he had discussed the rise in the dollar with his chief economists, what sort of steps will be taken and whether he will be having a meeting with the Chairman of the Central Bank of Turkey Erdem Başçı. Erdoğan said that they are considering the euro-dollar exchange rate and interest rates separately and that the actual matter is euro-dollar parity.

He further added that it is evident that the "interest rate lobby" is striving hard to influence the dollar exchange rates. "Furthermore, certain circles that are making extreme investments in the dollar will soon start losing money since the speculations here for withdrawing dollars from the markets and cornering the Central Bank of Turkey will not come true," Erdoğan claimed. He also underlined that the stance of the Central Bank of Turkey is extremely important, and that the chairman and the assistant chairman of the central bank have certain demands regarding such generalizations and speculations, which will be discussed when they return from the U.S. Erdoğan further added that currently there are no steps for the future, but all will be discussed upon their return.

The dollar decreased to TL 2.5765 after Erdoğan's speech, but the U.S. unemployment rate was announced right after, which has fallen to 5.5 percent, and this caused another increase in the dollar exchange rate and the lira exceeded TL 2.629.

Payroll data showed U.S. companies added 295,000 jobs in February, well above forecasts, to give an increase of 240,000. It was the longest run of 200,000-plus increases since 1994. The unemployment rate dropped to a lower-than-expected 5.5 percent from 5.7 percent in January. The dollar surged after the report. The euro tumbled below $1.09 and the yen weakened to more than 120 yen to the dollar. In addition gold prices also suffered a sharp decrease with the dollar gaining strength in global markets.

The Turkish lira slipped to a new record low against the U.S. dollar early on Friday morning on the back of a strong U.S. dollar index and uncertainty over the Central Bank of Turkey's rate policy.

Meanwhile, Economy Minister Nihat Zeybekci said that the lira's recent volatility is caused by speculation. Speaking in Germany at the Turkey Economy Platform held by Deutsche Bank, Zeybekci said that criticism by Erdoğan of the Central Bank of Turkey's interest rate policy is not aimed at the independence of the bank. "Most recently, our prime minister said there should be more rate cuts and we expect it. In response to these remarks, central bank professionals said they do not agree with this opinion and we are not on the same page," Zeybekci said. "This is the strongest indicator of the central bank's independence. Could there be clearer evidence for the independence of the central bank?" The lira has slid to a series of record lows against the dollar in the past weeks as the dollar index rose to a 12-year high. Since Feb. 19 the lira has lost over 6 percent against the dollar.
RELATED TOPICS