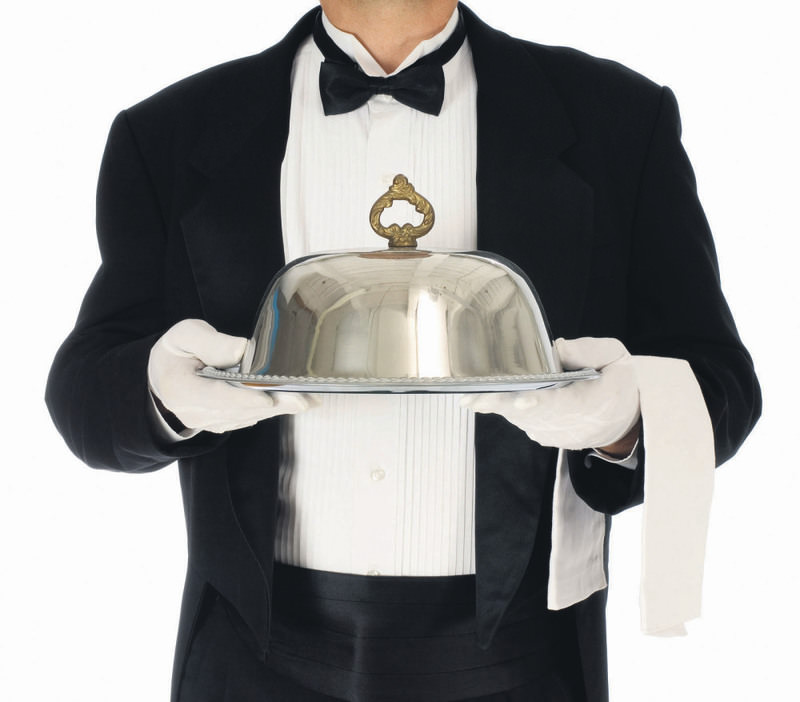 China's only foreign-run butler school opened last year, riding the coat-tails of increasing demand for the trappings of European-style old money in the Communist-ruled country, even as its economic boom slows

With hands sheathed in white gloves, Alvin Hu's dream of serving as the butler to China's growing ranks of super-rich faced an unlikely challenge: A dinner plate piled high with multicolored toy bricks.

Students at the International Butler Academy are drilled daily on everything from ironing perfect creases into tablecloths, polishing silverware and the correct cutlery to accompany an eight-course banquet.

"In the whole world, there are more and more rich people. And especially in China, they want someone to take care of the smaller things," said Hu, one of dozens of students who have enrolled in the school's six-week courses, which cost 40,000 yuan ($6,500).

In an exercise designed to test the steadiness of his hand, Hu steered a platter of plastic toys representing food towards his seated Swiss instructor, who furrowed his brow as plastic balls standing in for dinner careened in front of him. "Thank you," the instructor offered, after Hu used a silver knife and spoon to ferry an oversized brick onto his plate. A butler can typically expect to earn 20,000 yuan ($3,200) a month, according to Hu, making the course a worthwhile investment. China is home to more than a million people with assets above $1.6 million, according to wealth publisher Hurun, with numbers expected to swell in the coming years.

The country's elite have employed servants for centuries - with some, such as the eunuchs of the imperial court, enjoying high status and power of their own. But screen representations of British-style butlers have lent them a new aura of luxury.

"In the last few years, the demand for butlers has become bigger and bigger. So, it's logical for us to have teachers here," said Thomas Kaufmann, head instructor at the school. "It's easier to train a Chinese [person] in the butler trade than it is to train a Western butler in Chinese language and culture."

Butlers have a long history in Western books and films, from Jules Verne's Passepartout and P. G. Wodehouse's Jeeves, to Alfred in "Batman," but it is "Downton Abbey's" Carson who has stoked appetites in China.

"'Downton Abbey' is so famous here in China, that's the standard we are measured at," said Kaufmann.

The Academy, in the southwestern city of Chengdu, is Dutch-run but partly backed by a Chinese real-estate firm - reflecting the growing number of Chinese housing developments offering butler services to potential homeowners as the property market becomes tougher. A short stroll away, a billboard for a new housing estate shows a grinning man in a suit and bow tie, promising to bring "the elegance of British butlering service into everyday life." Pu Yan, a spokeswoman for developer Langji Real Estate, told AFP: "We provide a butler for each private villa. Our customers have been very happy."

Shi Chunming, a founder of rival Chinese firm Sinobutler, said he had recently signed "several cooperation agreements with real-estate firms." An index of new home prices in 100 major cities fell for eight consecutive months last year, but the downturn has proved a surprising boon for the school, according to Kaufmann.

"Now that selling apartments has become more challenging, companies have to provide more services for the tenants, who are also demanding more," he said. "That's actually pretty good for us."

But the phenomenon has been accompanied by cases of fly-by-night butlers who are trained to serve in property developers' showrooms to lure customers - in instances of false advertising. "Once the sales office is closed, the butlers disappear," he said.

The school is based in a villa decked out to resemble the kind of luxury home students hope to work in after graduation. Each morning's classes start with a round of dusting, cleaning and polishing, and the positioning of a water-jug can provoke ferocious debate - while a butter knife laid a centimeter out of place can lead to failure. Students laying a banquet table crouched and squinted to gauge the precise spacing of rows of forks, whipping out rulers to make sure the distances were correct. But not to Kaufmann's exacting standards. "How can you put cutlery down like this?" he demanded. "Why? Are you not listening? You did not measure. You have to measure!"

Chinese student Chrissy Yan - butlering is no longer a male preserve - said the training "can be hard, especially the table-laying," as cutlery rattled in the background. But her ambitions were undaunted. "I want to lead a team of Chinese butlers who will be known worldwide and asked to travel the world," she said.

Once employed, butlers' duties include more mundane tasks such as "fetching groceries, walking the dog, organizing cleaning staff [and] polishing furniture and shoes," Kaufmann said. Like most students, Hu is young but spent several years butlering for the likes of U.S. casino magnate Steve Wynn, where he said his tasks included wiping fingerprints from his boss' mobile phone and picking out his favorite variety of chocolate from assortment packs. "You need to think and take care of every single detail," he said.

But serving the rich is a pleasure, he insisted, and believes a certificate from the school will improve his prospects.

"Now butlers don't only serve wealthy families, but also multinational bosses. These people are successful. To make these kind of people feel relaxed and happy, I get a sense of achievement."
Last Update: Mar 20, 2015 1:36 am
RELATED TOPICS