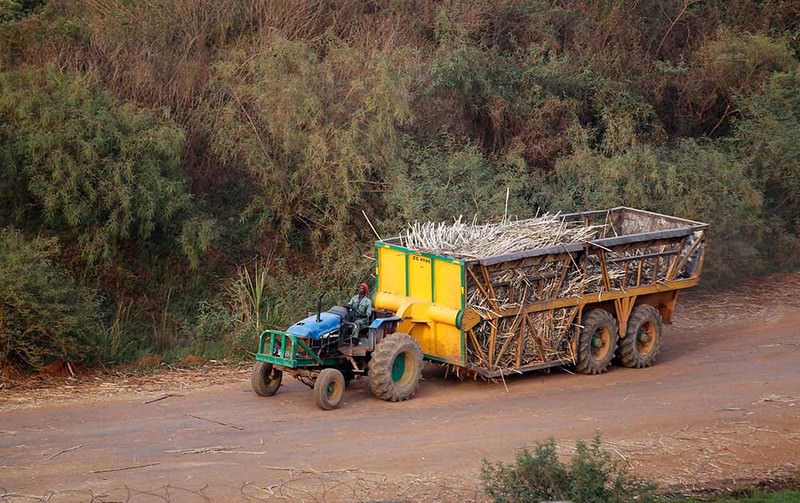 A man drives a tractor to transport sugarcanes from farms to a sugar factory in Mumias in western Kenya | Photo: Reuters
by Mar 20, 2015 12:00 am

The growth of Africa's middle-class combined with a fall in the prices of technology has opened up opportunities for investment in farms on the world's poorest continent. Human food production will need to increase 70 percent by 2050 to meet rising demand and Africa is home to more than half of the world's unused arable land, according to United Nations research. In addition to population growth, food needs will rise due to the increasing incomes of people in developing countries as they move from low income into the middle class. As incomes increase, people tend to eat fewer grains and increase their consumption of meat and high value foods. This transition requires higher levels of resource use. It takes multiple pounds of grain to produce a pound of meat. The pounds of grain to produce a pound of meat vary considerably among livestock species and within species (e.g. corn fed beef versus grass fed beef). Regardless, as incomes rise, people eat more meat. So the total pounds of grain consumed per person, directly as grain and indirectly through meat, increases substantially.

Africa's farms have failed to cash in because of a lack of access to infrastructure, training, capital and rapidly advancing technology. Areas being farmed by African smallholders are only producing around one metric tonne per hectare, compared with seven tons in developed markets. "Africa is key to global food supply and we need to unlock its potential," said Mark Davies, a dotcom veteran who runs Esoko, which provides advice to farmers and links them with traders in a virtual marketplace.

Esoko charges farmers $1 a month to use the service and businesses pay between $3,000-$20,000 annually. Other apps recently launched include a Kenyan cattle-monitoring app called iCow and online marketplace M-Farm, which has partnered with Samsung. By 2025, half of Africa's 1 billion population will have Internet access and there will be 360 million smartphones on the continent, according to McKinsey consultants.

Internet technology could increase annual agricultural productivity in Africa by $3 billion-a-year, McKinsey says. "People who don't have access to running water or electricity have access to a phone that is more powerful than computers we had a few years ago," said Sami Ibrahim, lead developer at Glasgow-based technology start-up Cojengo.

"That creates a huge opportunity," said Ibrahim, who along with his IT graduate colleagues developed VetAfrica, an app which provides veterinary advice.

Cojengo has been backed by Microsoft and, like most technology firms targeting African agriculture, it is also working with foreign aid donors. Growth in agriculture is twice as effective at reducing poverty as other sectors, aid agencies say, but tech firms are also hoping to turn a healthy profit. Cojengo wants VetAfrica to build a database it can sell to African governments, NGOs and pharmaceutical companies.

To spur growth in African agriculture, however, governments need to improve transport and power infrastructure, and banks need to lend to farmers. "The number one challenge for smallholder farmers in Africa is access to credit," said Kola Masha, founder of Nigerian firm Doreo Partners.

"As smartphone technology becomes cheaper we'll see an increasingly positive impact," said Masha, who has linked-up with Swiss RE to insure farmers against drought.

Masha hopes to reach 1 million smallholders by 2025 by providing technology, fertilizer and seeds to farmers, who pay him back when their profits increase. Agriculture giants like Syngenta and Monsanto are investing in technology in Africa but micro-tech firms are also popping up in off-the-beaten-track areas.

Cameroon's Mewanko Farm has set-up an online marketplace for farmers to sell fresh produce in a scheme it hopes will increase the income of 13 million people. The growth in the use of technology in Africa could bring hundreds of millions of poorly-organised and isolated people in rural communities into global markets. "I think of this as the last frontier on earth for the Internet," said Esoko's Davies.