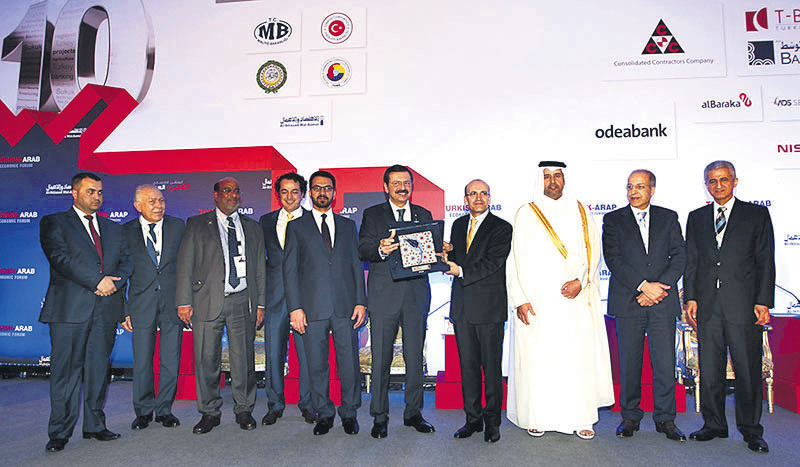 The Turkish-Arab Economic Forum, held in Istanbul for the 10th time has became a tradition now. While Arab investors underline the satisfying profits they have gained from their investments in Turkey, Finance Minister Şimşek offered free trade deals for mutual benefit

Mohammed Al-Shroogi, president of Gulf business at Investcorp, said on Wednesday that the company's investment in Turkey, worth $500 million, has generated a turnover of $5 billion for the firm.

Speaking at the tenth Turkish-Arab Economic Forum held in Istanbul, which gathered ministers and prominent public and private sector decision-makers from Turkey and Arab countries together, Al-Shroogi stated, "We are very happy about our businesses in Turkey."

Al-Shroogi spoke during the forum's panel session entitled "The Next Stage in Turkish-Arab Cooperation."

Investcorp, a Bahrain based leading provider and manager of alternative investment products, which serves high-net-worth private and institutional clients, has benefited from the advantages of Turkey, including its big domestic market thanks to its population and its strategic position.

"Turkey is situated on a very good location for many investors. The country also has friendly policies for investors and legal regulations are convenient," Al-Shroogi noted.

Praising Turkey's continuous success in governance, Al-Shroogi said, "We increased our investment activities eight years ago in Turkey and formed an exceptionally experienced team. We have made significant contributions to the country's economy."

Al-Shroogi stated that Investcorp is now looking into new investment opportunities in other companies, especially in the health and education sectors. Asked if they would invest in the real estate sector in Turkey, he said, "We are interested in Turkish companies, but currently we do not want to go into the real estate sector." Investcorp has many investments in this sector in the U.S. It is in both Turkey's as well as the Arab investors' favor that enterprises are getting their money's worth out of their investments in Turkey. For instance, Investcorp's investment in Turkey has generated 3,500 job opportunities. The CEO of Kuwait Finance House, Mazin Saad El-Nahedh also noted that they have been following the Turkish market since the 1980s and that they could not have predicted such a good development and change in Turkey. He also noted that as Kuveyt Türk, they do not focus on short-term gains but aim instead to be a bridge between Kuwait and Turkey, two countries with historical bonds. Describing Turkey as full of opportunities, El-Nahedh noted that there are many fields to invest in and added that, since the Turkish market is stable, there may be other banks that are willing to invest in Turkey in the future. He noted that political security and stability are of utmost importance for investments and that the main other factors which foreign investors are attracted by are flexibility and tax arrangements.

Turkish Finance Minister Mehmet Şimşek also participated in Wednesday's forum, and called on Arab states to explore further investment opportunities with Turkey. Discussing how Turkish-Arab cooperation might be improved, Şimşek suggested that more "free trade agreements" are required for the region as they would improve standards for cooperation. Şimşek highlighted that the value of exports of the Turkish automotive industry had increased from $329 million between 1994 and 1995 to $20-25 billion a year following the signing of the Customs Union Agreement with the E.U. He also pointed out that, despite fears in the Turkish automotive sector that they wouldn't be able to compete with the E.U., today 80 percent of Turkey's exports are to European companies. "Competition improved the sector. So our friends in the Middle East shouldn't have any concerns," said Şimşek. "I am calling on the Arab countries, we can grow together," he indicated. Simsek said stability and clarity were necessary to move forward and explore investment opportunities on both sides. Inviting Arab states to discover and invest in Turkey, Şimsek said Turkey's relations with the Arab world had surged significantly over the last decade. He said, "When we firstly started the Forum ten years ago, the trade volume between Turkey and the Arab states didn't exceed $7.5 billion." "However, in 2014, the total trade volume reached $46 billion."

Iraq's Minister of Construction and Housing, H.E. Tariq Al-Khikany, called on Turkish firms to increase their investments in Iraq during his speech at the Forum. The two most important problems that affect Turkish firms in Iraq are the issue of security and unsettled debts owned by the Iraqi government. Responding to a question about how Iraq will handle these two problems, Al-Khikany revealed that he had held talks with the Turkish Ambassador in Iraq, and had already prepared a plan about how to settle Turkish firms' claims and to secure workers' transportation to construction areas. The Minister said that, although Iraq still struggles with terrorism, regions under the control of the self-proclaimed Islamic State of Iraq and al-Sham (ISIS) constitute only 25 percent of total land. He said that Iraq's security problems concerning Turkish workers had been solved to a large extent, except in two cities. According to the Minister there are currently 25 Turkish firms operating in Iraq, but this number needs to increase, since the country needs an extra 2.5 million housing, especially in the southern and central part of the country.