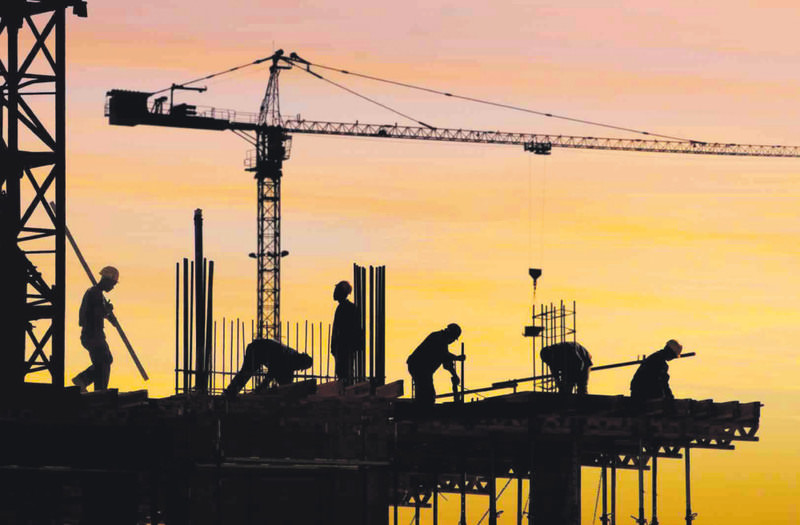 The Turkish construction sector's turnover increased 4.6 percent and overall production rose by 3 percent in 2014 compared to 2013. Experts indicate the reasons as rising urbanization and the need of higher quality buildings

Urbanization, combined with demand for higher quality buildings, is driving growth in the Turkish construction industry, analysts told Anadolu Agency yesterday. Turkey's population growth, which is occurring at a faster rate in cities than in rural areas, will outpace that of its regional neighbors - boosting investment in commercial and residential real estate, Richard Marshall, an infrastructure analyst with BMI Research in London, said."The most recent statistics to come out of Turkey are the production and turnover indices for the construction industry," according to analysis from the ITE Group. "These show steady growth over the last year, which is a clear positive for the sector."

In 2014, the Turkish construction sector's turnover increased 4.6 percent on the previous year. In 2014's last quarter, this rise continued as the turnover index improved by 0.9 percent compared to the third quarter, still slightly lower than the high point seen in the first three months. The first quarter of 2015 is expected to see an even greater rise, the ITE analysis said. Meanwhile, overall production rose by 3.0 percent in 2014 compared with 2013, according to statistics from the Turkish Statistical Institute.

Cities see most growth"Urban transformation is gathering momentum in major cities, particularly in Istanbul," industry analyst Cameron Deggin told AA. "This is giving rise to major facelifts on old historic town centers fallen in!to disrepute such as Gaziosmanpasa in Istanbul, where the volume of urban transformation transactions are the highest.

"Other areas worthy of consideration in this regard in Istanbul are Bomonti, Sisli, Kagithane, Talimhane and certain parts of Fatih. Similar high profile projects are ongoing in all major cities of the country. By the year 2020, urban transformation targets are to redevelop up to 350,000 housing units."

With about 70 percent of Turkey's population living in cities, the need for both housing and major infrastructure projects in those areas is critical, ITE reported.

Furthermore, the know-how to address these projects is abundant. "A further strength is that Turkey has some of the most experienced construction companies in the world, able to tackle projects of nearly any scale," Marshall said. In terms of weaknesses, the industry has a heavy reliance on domestic credit, which in recent years has become increasingly costly, Marshall warned.

"We have been expecting a drop-off in production in the residential market," he said. "Elevated house prices have spurred housing development and created oversupply in the market. This has happened at a time when tight credit conditions have seriously capped the affordability of mortgages for the Turkish consumer. "On a more positive note, the drop in production is only minor, indicating that the market is aware of the issues it is facing and reacting accordingly. As such, there is less of a risk of a major collapse in production." There has also been a move to providing higher quality projects, which has put upward pressure on prices.

The outlook"There is a rising trend for quality constructions as opposed to standard buildings," Deggin said. "New projects launched in 2014 compared with previous years are notably higher quality and more comprehensive with notably higher prices per square meter, indicating a real price growth in the sector and demand for quality."

There has also been significant growth in infrastructure development, Marshall added.

"In particular, we highlight those areas which have had success in leveraging the private sector into financing projects," he said. "There have been a number of false starts in the use of the Public-Private Partnership model in Turkey, with cancelled road deals and port contracts failing to come to fruition. "However, we have continued to see major deals done within the healthcare and power sectors and now others are also gaining more traction." According to industry observers, rising prices have also affected growth. Marshall said: "We have been expecting a drop-off in production in the residential market. Elevated house prices have spurred housing development and created oversupply in the market. On a more positive note, the drop in production is only minor, indicating that the market is aware of the issues it is facing and reacting accordingly."
Last Update: Apr 15, 2015 11:59 pm
RELATED TOPICS