G20 should take over where UN fails, suggests deputy PM 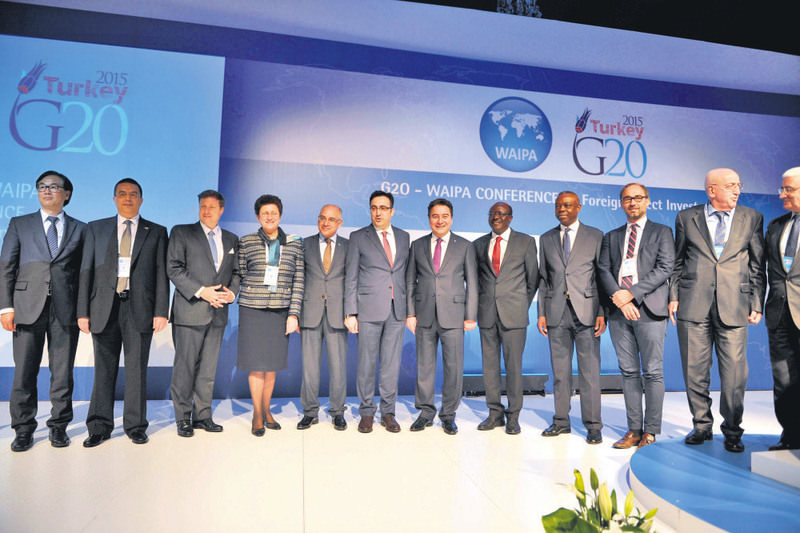 After President Erdoğan criticized the United Nations Security Council claiming it has a poor decision making process, Deputy PM Babacan suggested the G20 as a new platform for discussions of political issues

Deputy Prime Minister Ali Babacan said the United Nations Security Council (UNSC) cannot offer any solutions to economic crises, geopolitical problems and humanitarian crises in the world and that the G20 should be filling this void. President Recep Tayyip Erdoğan declared several times in the past that disagreement between the five permanent members of the United Nation Security Council neutralizes the U.N.'s power to act, and that the world needs new decision-making mechanisms.

It turned into a campaign after he said "The world is bigger than five" at the 69th general assembly of the U.N. in September 2014, one month after he became the president. A new platform suggestion came from the deputy prime minister of the country, who is also the minister responsible for Turkey's G20 presidency term. Speaking at the opening of the "Building Tomorrow-Target 2023" Forum Istanbul 2015, Babacan said that since the G20 is a platform with high representative power, it is becoming more politically effective and any matter agreed at the G20 is more easily accepted globally.

The first official G20 meetings were held between ministers of finance and chairmen of central banks. Babacan said that the Leaders' Summit has been held since the 2008-2009 crisis. He said that "since it was not possible for the G7 countries to resolve these [crises] on their own, the G20 leaders' summit has been initiated, and ever since, the G7's effect on matters related to the economy has been decreasing." "As a result, the G20 has become the main platform for discussing global finance and economy," said Babacan. He also underlined that political matters such as foreign policies and international security should be discussed at the G20 summit, and said that the G20 has become a common platform for the whole world. He also said that there are some who would not want the G20 to become more powerful, as it will diminish the effect of the U.N.'s Security Council. "It is interesting during the presidency of the country that was completely against the G20 becoming involved in political issues, the Syrian crisis was discussed throughout the whole dinner," said Babacan.

He also indicated that they will strive for the G20 to become more of a political platform along with an economic and financial one, just like they have striven for the G20 to become a leaders' summit. He underlined that this is a necessity, due the U.N's Security Council inability to come up with solutions to the various crises in the world and therefore, the G20 should be the authority to step in.

Investment-friendly environment is the least costly way for growthDeveloping the investment environment is the cheapest way to sustain growth, according to Deputy Prime Minister Ali Babacan. He said that political and economic stability is a must in order to foster a suitable climate for investments. Babacan delivered a speech at the G20-WAIPA International Direct Investment Conference of World Investment Agencies Union, headed by the Prime Ministry's Investment Support and Promotion Agency. Along with Babacan, representatives of the World Investment Agencies Union and representatives of development agencies active in Turkey also attended the conference. According to Babacan, direct foreign investments push economies up in the global chain, and for investments, a general trust in the markets, proprietary and industrial property rights, rule of law, human capital, transparency in trade and welcoming funding are essential for countries wanting to draw investments.

Underlining the fact that Turkey offers many unique opportunities to foreign investments, Babacan said that a liberal and secure investment environment plus strong macroeconomic indicators have made Turkey an attractive country for investments. "Turkey has received an annual $12.5 billion worth of investments over the last 14 years. Government investments have never been the driving force. Our current export is around $160 billion. And I can easily say as a member of the cabinet for the last 13 years, the cost-effectiveness in Turkey has been the underlying reason behind Turkey to attract investors," said Babacan.

He said that the requirements of the business world should be understood, and Turkey's development agency has been well designed and well established, as it is working flexibly as a private sector company, which was what was intended in the first place. Babacan also said that they are developing unique investment strategies for each country.

World SMEs forum to be established During his speech Babacan announced that during the annual spring meetings of the IMF and World Bank Group in Washington, it has been decided that a World SMEs (small and medium-sized enterprises) forum will be established in cooperation with the International Chamber of Commerce (ICC) and G20. Turkey has announced that SMEs will have a crucial role during the country's G20 presidency term regarding the aim to provide inclusivity as the driving force of global economies.

Babacan further said that the World Bank and the Organisation for Economic Co-operation and Development (OECD) have agreed to be founders of the World SMEs Forum, and have officially notified this. "We will bring an institution to the world, which will be the common voice of SMEs. This is a first, and we are working for Istanbul to be the center of this forum," said the deputy prime minister.
Last Update: Apr 28, 2015 5:00 pm
RELATED TOPICS