President Erdoğan: Turkey aims to use no external resources for defense systems 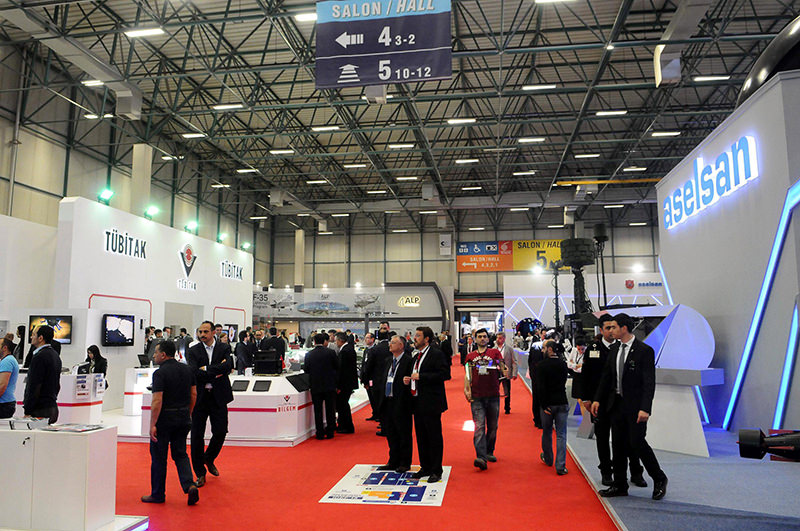 President Recep Tayyip Erdoğan said yesterday that Turkey is meeting 54 percent of its defense needs using its own resources. "Our aim is to completely eliminate external dependency on defense equipment supply with ongoing projects and investments until 2023. Our next target in the defense industry will be unique designs," Erdoğan said. Speaking at the opening ceremony of the 12th International Defense Industry Fair (IDEF), sponsored by the Turkish Armed Forces Foundation and held at TÜYAP Fair Convention and Congress Center, Erdoğan said, "There are two Turkish defense companies among the top 100 largest defense industry companies in the world. The production potential of our defense industry has surpassed $5 billion in the last year. With $1 billion in annual research and development expenses, our defense industry has become the industry that marks the most investment in research, development and technology." Turkish defense producers aim to increase exports from $1.6 billion last year to $25 billion by 2023, according to the undersecretary for defense industries. The top export items include aircraft, helicopter parts, engines, armored land vehicles, speed boats, missiles, rockets, launching platforms, light weapons and electronic systems, including transmitters, simulators, sensors and software.

Turkey is currently negotiating a $3.5 billion deal for a long-range air and anti-missile defense system, including local production, with suppliers from China and Europe. Turkey aims to spend around $70 billion on military equipment until 2023. The IDEF 2015 Fair, which has been held every other year since 1993, is expected to bring together more than 400 companies from 32 countries. The fair, which opened on Tuesday, will continue until May 8.

Erdoğan stressed that huge steps were taken in the defense industry during the first period of the Republic by considering the problems faced at the time, but unfortunately ready-made products began being bought from other countries especially after World War II. "Plane factories, shipyards and other facilities were locked down and those needs were supplied from external resources under the umbrella of NATO. The Cyprus interference and fight against terrorism, which has lasted for many years, clearly demonstrated it is necessary to establish our own defense industry. Always being prepared for security is an obligation as long as assailants are in the world," Erdoğan said. Turkey's defense spending was $13.2 billion in 2014, according to the Defense Ministry.

Erdoğan added that even the defense industry projects that he attended in the last two to three years were enough to give an idea about the ground covered in the field. He said: "I attended the opening of the ASELSAN Gölbaşı Campus Radar and Electronic War Technology Center on March 16, 2015. I witnessed the signing ceremony of the TÜRKSAT 6A project in Gebze on December 15, 2014. I also participated in the delivery ceremony of the ATAK helicopter in June 2014. I attended the delivery ceremony of the Büyükada warship, which is the second product of MILGEM projects, in September 2013. And I participated in the roll-out ceremony of our Hürkuş Aircraft in 2012. Besides all of these, works regarding the ALTAY main battle tank is in the final phase. The prototype of the tank is ready and mass production will begin soon. We are also engaging in many projects concerning unmanned aerial vehicles. The ANKA project and Taktik Unmanned Air Vehicle system are in their final phases, and MILGEM's Heybeliada warship came into service. As part of the same project, the building of the Burgazada ship is in process."

Erdoğan stressed nearly 100 military ships and fast patrol boats were built at Turkish shipyards and delivered to Coast Guard Command while the process of designing the national warship was continuing. He also highlighted the next aim in the defense industry was original design. "All of our projects serve this aim. Our ventures in the fields of industry and technology are not limited only to the defense industry. We are engaging in projects on various products ranging from indigenous chip production and indigenously designed automobiles, to high-speed train cars and wind power plants," Erdoğan said, emphasizing Turkey wants to reach a gross national product (GNP) of $2 trillion by 2023, which is now $800 billion. National Defense Minister İsmet Yılmaz said IDEF was the largest in the region and the fifth largest among the defense industry fairs in the world. Stressing the number of countries and defense companies attending the fair increases with each passing year and many protocols and cooperation agreements are signed during the fair, Yılmaz said, "Greater momentum will be gained in bilateral relations with new agreements. I believe IDEF will make huge contributions to the relations between countries."
Last Update: May 05, 2015 7:06 pm
RELATED TOPICS