Airbus applies to build logistics base at third Istanbul airport 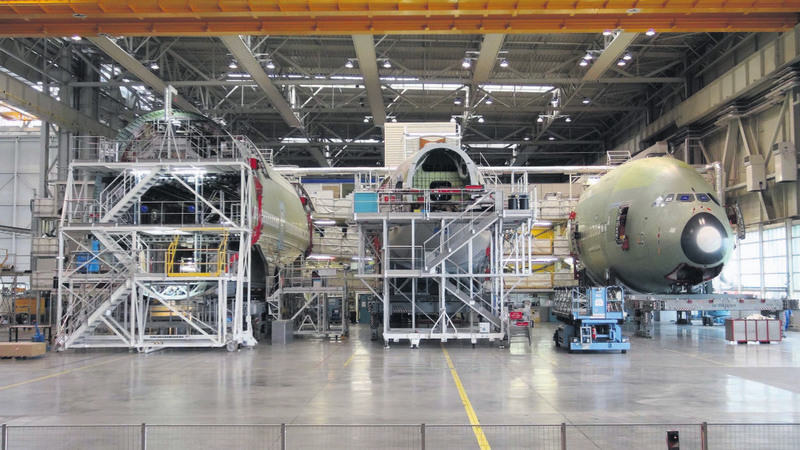 The third airport to be built in Istanbul, which is expected to change aviation balances not only in Turkey, but the whole region, is already drawing the attention of foreign investors

While it is still under construction, Airbus, a major airplane producer worldwide, has already said that it wants to invest in the new airport. Limak Yatırım Holding CEO Ebru Özdemir visited Toulouse, France as a guest of Airbus together with students of Limak ASI, an aviation training project in Pristina, Kosovo. She both toured the production facilities and held a meeting with executives of the hosting company. Speaking to the press after the meeting, Özdemir said the top managers of Airbus Real Estate Department had requested an area to be reserved for them.

Saying that they made a presentation to Airbus executives about the third airport, Özdemir stated that they are very interested in the project and that the demand for aircraft has switched from the West to the East with all of the 140 orders placed last year being from the Middle East and Far East, excluding orders from the U.K. "They have expressed their desire to build a logistics base in order to perform repairs and maintenance of planes, including spare parts and simulators, and have asked us how we can collaborate. They also informed us that they want to rent a space at the third airport," Özdemir said.

According to Özdemir's speech, they presented an area in the master plan to Airbus and as the first stage they want to rent out an approximately 20,000-square-meter space. She added that this is the first step and with the initiation of the Airbus project, one of the biggest aviation companies will come to Istanbul. She further added that she believes Turkey will become the logistics center of many aviation firms.

She also underlined that while the company has decided to invest in other countries before, things did not go according to plan and, therefore, they started considering Turkey. Özdemir pointed out that the qualified labor force in Turkey had an effect on their decision as they have faced difficulties such as hiring staff with the adequate level of English. She also added that Turkish Airlines' international success is another reason for this decision.

On Limak's energy investments, Özdemir said that they are one of the groups that have completed their vertical integration in the energy sector and are considering founding Limak Enerji Holding by calling their energy group to a meeting. "Our aim is to become one of the third leading companies in Turkey in terms of production and distribution," Özdemir said.

She also underlined that the third airport being built by the Limak-Kolin-Cengiz-Kalyon-Mapa joint venture has a very important strategic location and is ideal for large aviation companies such as Airbus to make Turkey their aviation base.

Özdemir also said that they are interested in the privatization of airports in Europe, mainly the Lyon and Nice airports in France. "Our partner in Lyon is motivating us in this respect and since aviation is an area we are extremely interested in, we believe we can contribute to the European aviation industry," Özdemir said.
Last Update: May 18, 2015 2:33 am
RELATED TOPICS