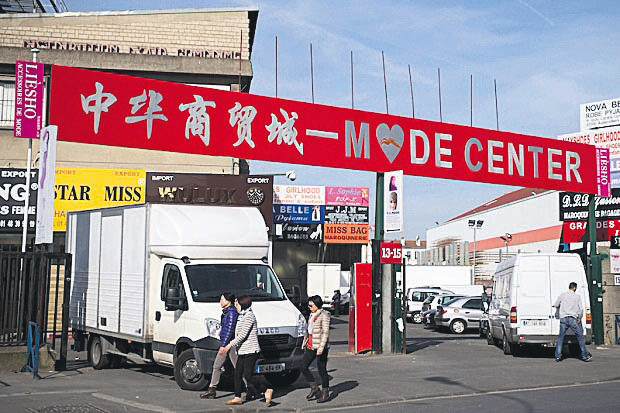 by May 10, 2015 12:00 am
The rows of upmarket sedans look out of place parked in the working-class Paris suburb but this is Aubervilliers, Europe's made-in-China clothing capital where traders recently opened the continent's biggest garment centre.

A vast range of clothing is on offer in this town on the northern edge of the French capital where generations of Chinese have settled - and some made fortunes. Canny shoppers can pick up a smart ready-to-wear suit for 40 euros ($46) in a central store or a pack of cheap socks in the supermarket, while a stall-holder on the street offers sneakers. "Here, you can find anything at almost any price," said Min, a labourer who came from China six years ago, as he pushed a cart laden with boxes and bags for delivery to a wholesaler. "People come from all over Europe," he said, himself dressed in fashionable jeans and black down jacket. "This is international." Behind Min, customers and porters squeeze between double-parked vans as they head in and out of shops with flashing signs and, at times, whimsical names like: "Glam Couture," "Bisou's Project," "La Bottine Souriante" (The Smiling Bootee) and "Miss Baby Hot Bottom." When the new Fashion Center - expected to generate more jobs - officially opened at the end of March, it became the largest market of its kind in Europe, overtaking a similar one at Duesseldorf in Germany.

"Aubervilliers has become one of the most important places for business and exchange with China in all of Europe," said the town's mayor, Pascal Beaudet. "So we needed to organise accordingly and that's what we did."

"For those who work in the garment industry, Aubervilliers is indispensable," said Gaetan Le Gorre, 37, keeping one eye on workers loading his van with a cargo of jeans bought from a local wholesaler. Le Gorre, from the Brittany region in northwest France, sells clothes in street markets and comes "at least once a week" to stock up in what he calls "ready-to-wear Chinatown." "I pick clothes out, I barter. Here you have everything at hand, but you need to know your way around." Hundreds of wholesalers offer an endless choice of textiles, colours and patterns in this vast district between the Paris beltway and the national sports stadium, Stade de France -- where France won the 1998 football World Cup. "Behind every shop, there's a whole team," said Pascal, a young Frenchman of Chinese origin who did not give his last name and recently took over his parents' store. "We turn to French fashion designers to satisfy a Western clientele."

In the maze of alleys and dead ends, almost all of the family businesses are run by people from the region of Wenzhou, a town in southeast China where emigration is a deep-rooted tradition. There was a snowball effect after the first Chinese wholesalers starting setting up in Aubervilliers around 2000, said left-wing Mayor Beaudet. With the city today counting about 1,200 Chinese traders - not including labourers and other employees like Min - Aubervilliers has become the main commercial junction between France and China. "There is a new generation of businessmen who have arrived, who are French of Chinese origin and who speak French," Baudet said. "And so I know, in terms of hiring, that there are non-Chinese who work in the stores. It's a new reality and of course it's interesting for the city and its residents," he said. The pioneers had actually arrived in France years earlier, said Richard Beraha, a specialist on the Chinese community in the Paris region. At first they had no papers but found work, acquired legal status and gradually earned enough to go into the wholesale business. One of them, Hsueh Sheng Wang, has built a clothing empire and amassed such a fortune in his late 40s that he has become known as "the king of Aubervilliers."

He owns dozens of shops in the town but made a bigger name in 2011 when he bought a large share in the northern French port of Le Havre, the country's hub for ocean-borne trade with Asia. Wang and seven fellow investors of Chinese origin are behind the new Fashion Center, now Europe's biggest wholesale textile market with 310 shops in 55,000 square metres (592,000 square feet) in the heart of Aubervilliers. The Center aims to to draw buyers from across Europe and make the textile import-export trade more efficient by consolidating business in one location, said Wang who sees the project as beneficial for the French economy. The Fashion Center will create "about 2,000 jobs... and not only for Chinese people," said Victor Hu, 47, one of Wang's partners who traded in the uniform of the French Foreign Legion for a suit and tie after a spell in the service entitled him to French citizenship. "We have made a small path," Wang smiled. "The new generation will build a highway."
Last Update: May 10, 2015 10:00 pm
RELATED TOPICS