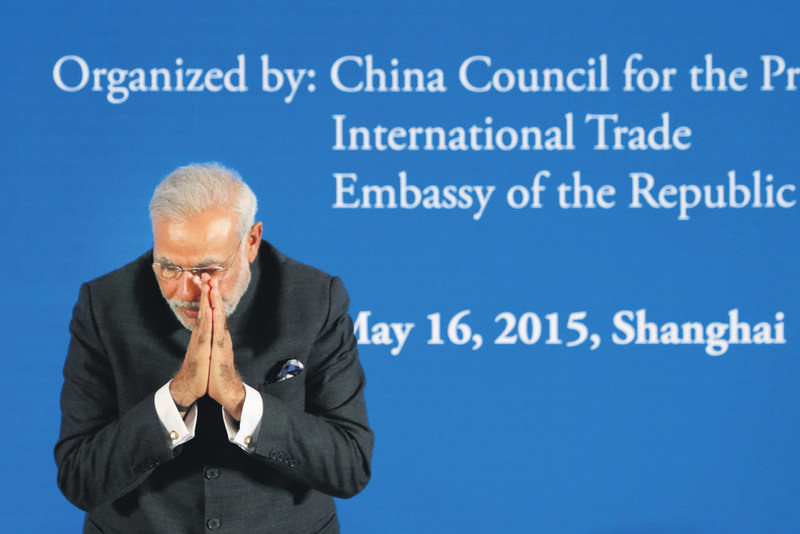 by May 17, 2015 12:00 am
Indian Prime Minister Narendra Modi got down to business on the final day of his trip to China on Saturday, saying his country was open for investment, as firms signed deals worth more than $22 billion. "Let us work together in mutual interest and for progress and prosperity of our great countries," Modi told executives from 200 Chinese and Indian companies at a business forum in the Chinese commercial hub Shanghai. "Now India is ready for business." The nationalist leader was on the final day of a three-day trip to his fellow Asian giant, as the two jockey for regional influence and India's trade deficit with China balloons. Despite his hardline reputation, Modi has moved to engage with Beijing since his election last year, and he was looking for an economic boost from the visit, seeking to deliver on election promises for foreign investment.

China is India's biggest trading partner with two-way commerce totaling $71 billion (62 billion euros) in 2014. But India's trade deficit with China has soared from just $1 billion in 2001-02 to more than $38 billion last year, Indian figures show. Indian embassy trade counselor Namgya Khanpa said the 21 agreements signed at the Shanghai event were "worth over $22 billion," with another five exchanged earlier. Many of the contracts were for Chinese banks to finance Indian firms and also included deals in the telecom, steel, solar energy and film sectors, she said.

They included an agreement for the China Development Bank to fund a power plant for India's Adani Power, as well as a steel project between Indian conglomerate Welspun and two Chinese firms, according to a list released by Indian officials. No individual deal values were given. Modi welcomed potential Chinese investment in sectors such as housing, renewable energy, high-speed rail, metro, ports and airports, adding that India was eager to draw on China's expertise in mass manufacturing.

"We are very keen to develop the sectors where China is strong," he told the business forum ahead of the signing ceremony. "We need your involvement." "I strongly believe that this century belongs to Asia," he said, as he sought to stress historical links between the two countries. But they have followed significantly different economic paths in recent decades, with China rising to become the world's second-largest economy, while India has lagged behind, although Modi's election raised hopes for reform among investors.

Earlier during Modi's visit, Chinese President Xi Jinping welcomed him in Xian, the capital of his ancestral home province Shaanxi, in what his host said was an unprecedented gesture.Nonetheless, relations between the world's two most populous nations are soured by a long-running border dispute that saw them fight a brief war in 1962, and on Friday Modi told Premier Li Keqiang that China needs to "reconsider its approach" to their ties.

"Our relationship has been complex in recent decades," Modi said in Beijing, adding there were issues that "trouble smooth development of our relations."

His comments stood out from the usual public declarations by diplomatic visitors to the Chinese capital, who normally stick to uninterrupted pledges of friendship and good relations. Both countries are members of the BRICS grouping of major emerging economies, but China has vowed to pour investment into India's arch-rival Pakistan, as it rolls out infrastructure development plans across Asia, much of which bypass India.

Modi, elected in a landslide victory in polls a year ago, said Friday that democracy was an advantage for his country, but when a group of Indian students studying at Fudan chanted his name as he arrived, suspicious Chinese security guards moved towards them before being waved off. "We just wanted to greet him," one of the students told AFP.

Modi left China late Saturday to arrive in Ulan Bator where he will stay for one day as the first Indian prime minister ever to visit Mongolia, according to a tweet by the external affairs ministry.
Last Update: May 17, 2015 10:37 pm
RELATED TOPICS