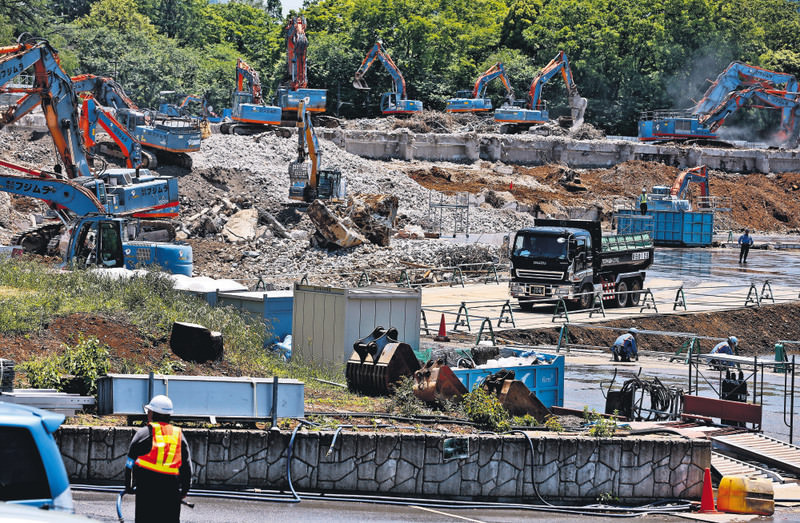 As Japanese government runs short of money and time, the country's minister of sports puts forward a plan for a roofless stadium with temporary seatings to cut costs of the National Olympic Stadium's redevelopment project

Tokyo's National Stadium, which is under construction for the 2019 Rugby World Cup and 2020 Olympic Games, should abandon its retractable roof plans to save money, Japan's sports minister proposed yesterday.Ongoing preparations for the 2020 Olympic stadium have persisted despite criticism by Japan's Sports Minister Hakubun Shimomura who stressed that a planned retractable roof would not be built in time for the games. Shimomura also said he wanted around 35 percent of the seats at the 80,000-seat stadium to be temporary ones to further boost cost-cutting measures and shorten construction time at the 170 billion yen ($1.42 billion) facility. Japan plans to scale back the main stadium for the 2020 Tokyo Olympics as the government runs short of money and time, the country's sports minister said Monday.

Masuzoe also blasted the government as "irresponsible" for making the demand. "The figure being mentioned is around 50 billion yen," Masuzoe said, according to Nikkan Sports daily. "Up until now, there has been absolutely no communication about this. It is irresponsible because we have to think of the taxpayers. It's irresponsible to keep repeating 'we can build it.' But that's just like the Japanese Imperial Army during the war saying 'we're winning, we're winning' - when in fact we were losing."

Plans for the new stadium have also been criticized by some prominent architects, who say the design is too big and expensive. It is due to be completed in time to host the Rugby World Cup in Japan in 2019.

Shimomura told Masuzoe that Tokyo would benefit from the stadium and that the roof would be installed after the games, public broadcaster NHK said. The sports minister said that they "hope to present a precise budget and plan by the end of the month. We would like Tokyo to contribute to the costs of building the stadium," in regards to further details of a final estimate for the stadium construction that will be released later this month.

Tokyo Olympic organizers have been looking for ways to reduce costs. The International Olympic Committee's executive board gave them the go-ahead in February to change three venue locations to save money, and said it was weighing up more options. The 2020 Olympics will also make more use of existing venues than initially proposed.

The International Olympic Committee said Tokyo has saved more than $1 billion so far in costs. It is the latest cost-cutting measures by Japan following announcements in February they were moving or altering three venues in order to save around $1 billion.

Rising labor and construction costs have forced Tokyo to rethink its Olympic plans. The changes mean they will fail to meet an existing commitment that they would host a majority of Olympic events within eight kilometers of the games' village. The new National Stadium will be built on the grounds of the old, now demolished one, which was constructed to host the 1964 Olympics. When built, it will stage the opening Rugby World Cup match on Sept. 6, 2019, as well as the final on Oct. 20, 2019.
Last Update: May 18, 2015 10:19 pm
RELATED TOPICS