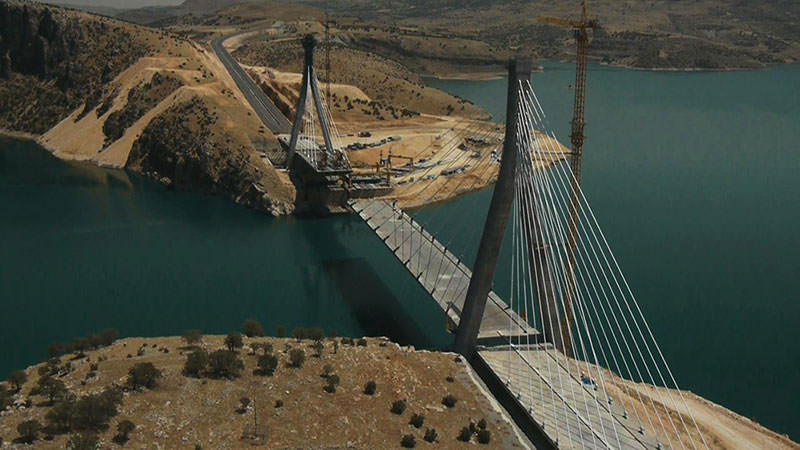 by Daily Sabah May 21, 2015 12:00 am
Turkey's third-longest suspension bridge, the Nissibi Euphrates Bridge, has been completed after 37 months of work and opened with a ceremony attended by President Recep Tayyip Erdoğan. The cable-stayed bridge, which spans the Atatürk Dam on the Euphrates River, connects Şanlıurfa's Siverek and Adıyaman's Kahta districts.

The project, which was undertaken by Turkish engineers and architects, was completed after the last segment was placed in January, stirring great excitement in the region. The Nissibi Euphrates Bridge, which is 610-meters-long and 24.5-meters-wide, cost TL 80 million ($34.1 million) to build. The bridge also has 96-meter-high pylons and a central span of 400 meters. The bridge is the third-longest suspension bridge in Turkey after the Bosporus and Fatih Sultan Mehmet bridges, which connects the European and Asian sides of Istanbul.

With the retention of water at the Atatürk Dam in 1992, roads that connected Siverek and Diyarbakır were submerged, reducing transportation options in the region to only ferries. The people of Adıyaman have suffered economic, cultural and social disadvantages for 23 years due to troubles with transportation and are very happy with the new bridge's inauguration, as they can now travel without waiting long hours.

Twenty years after Atatürk Dam was built, the foundation of the bridge, which is described as "the Bosporus Bridge of Southeastern Anatolia," was laid on Feb. 26, 2012 by the Transportation, Maritime and Communications Ministry, on instruction by then Prime Minister Erdoğan. Passing through Adıyaman, which was previously known as the "blind street", the bridge will provide access for the provinces of Bitlis, Siirt, Şırnak, Batman, Mardin, Van and Diyarbakır to western provinces.