Airline CEO: If you want Qatar state contracts, give us flight slots 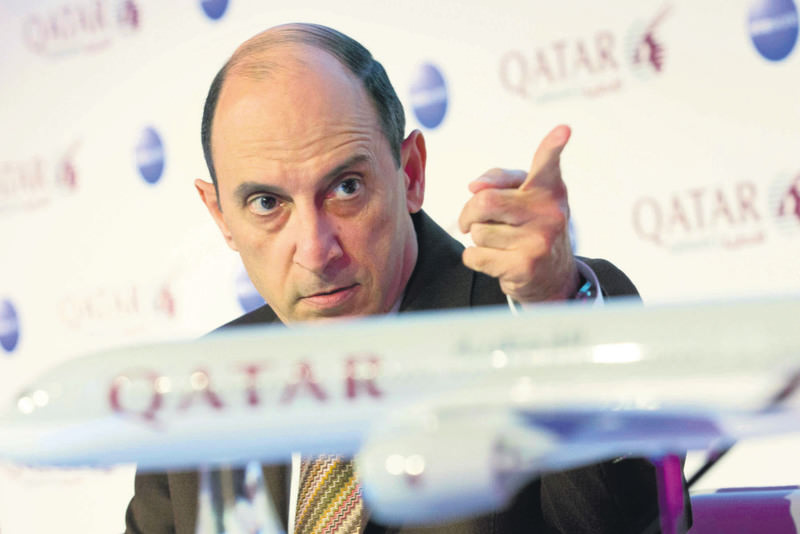 Al-Baker said Qatar would take note if Qatar Airways was not awarded the extra slot it is seeking in order to fly seven days a week to and from Schiphol.
by May 28, 2015 12:00 am

While the Dutch government will temporarily stop granting new slots at Schiphol to Gulf airlines, Qatar is likely to favor countries whose airports grant take-off and landing slots to state-owned Qatar Airways

In handing out lucrative public procurement contracts, Qatar is likely to favour countries whose airports grant take-off and landing slots to state-owned Qatar Airways, its chief executive said on Tuesday. The remarks by Akbar al-Baker, in Amsterdam to launch a new six-times-a-week route, may fan the protests of western carriers that Gulf competitors have unfair advantages because of their close relationships to their governments. He said the Qatari government would undoubtedly take note if the airline, one of a trio of Gulf carriers that have shifted the industry's centre of gravity eastward, were not awarded the extra slot it is seeking in order to fly seven days a week to and from Amsterdam Schiphol.

"If you do not allow us to benefit in a small way by bringing flights, you should not expect commercial contracts from the government," he said.

Earlier this month, the Dutch government said it would temporarily stop granting new slots at Schiphol to Gulf airlines, promising a tougher line against possible "unfair competition" from the Middle East. That stance, if maintained, would prevent Qatar Airways from getting the extra day it wants.

"My government will definitely not be happy... (Royal Dutch) Shell is one of the biggest single investors in the country and there are some $150 billion in infrastructure projects coming up in the next years," Baker said.

While he later stressed that he had no direct influence over public procurement decisions, he said Qatar offered rich pickings for western companies in the run-up to its hosting of the 2022 football World Cup.

Decisions about cargo-carrying slots are likely to be at least as important in the airline's thinking as passenger slots, with Qatar now by some measures among the world's top 10 freight airlines. U.S. carriers Delta, United and American Airlines want a temporary freeze on new Gulf airline services to the United States to protect them against more than $40 billion in domestic subsidies they say Qatar, Emirates and Etihad have received in the past decade. But, comparing the American carriers' frequent sojourns in chapter 11 bankruptcy to a state subsidy, Baker said the government's equity holding was the only support he received. Europe's flag carriers had enjoyed government equity holdings for most of their history, he said. "And we are still a young airline." He said the airline, founded in 1993, would be listed by the end of this decade or early the next, with 49 percent of the equity free for non-Qatari investors to buy.