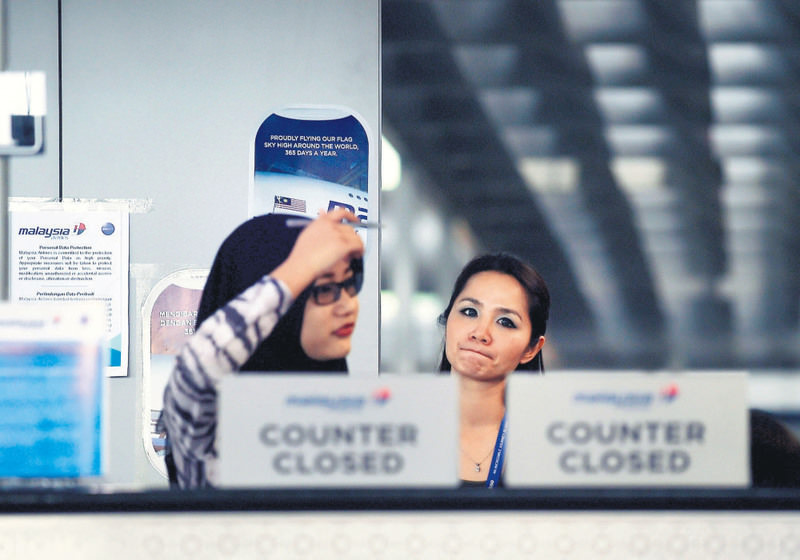 Malaysia Airlines employees stand behind a closed-counter at the departure terminal of the Kuala Lumpur International Airport in Sepang yesterday.
by Jun 01, 2015 12:00 am

Christoph Mueller said the ailing carrier could break by 2018 after selling two of its A380 super jumbo jets and going ahead with its previously announced plan to cut 6,000 of its 20,000 staff

The newly appointed chief executive of loss-making Malaysia Airlines said yesterday the carrier is "technically bankrupt", underlining the case for a restructuring to cut a third of jobs, scrap some international routes and review its long-haul fleet. "We are technically bankrupt...the decline of performance started long before the tragic events of 2014," Christoph Mueller said, speaking at a news conference. Already squeezed into years of losses by stiff regional competition, the carrier was seriously affected last year by two separate jet disasters.

Mueller was making his first public appearance as CEO since being hired last month by the carrier's owner, Malaysian state fund Khazanah, to lead the restructuring. Khazanah, previously the majority owner, took the airline private last year as part of a 6 billion Malaysian ringgit ($1.63 billion) plan aimed at returning it to profit within three years.

"We will remain a full service international carrier connecting continents," Mueller said, adding that while some international routes will go there were no plans to turn it into a regional carrier. He also said there would be no cutbacks in domestic network.

Capacity measures would include "reducing aircraft size on certain routes, reducing frequency on certain routes, and certain cases abandoning the route altogether," he said. As part of the restructuring, the airline will review the fleet of 13

long-haul routes, while planning to find buyers for two of six Airbus Group A380 aircraft it currently operates on flights to destinations like London. It plans to keep the remainder of its fleet intact.

Before joining the Malaysian carrier, the 52-year-old German national successfully restructured Ireland's state-backed Aer Lingus and spearheaded a revamp at Lufthansa. The executive told Reuters in an interview last week that he was aiming for a much smaller network and fleet, as well as a sharper focus on cost-cutting.

In its last earnings announcement as a public company, the airline recorded its worst quarterly loss since late 2011 as passenger numbers and yields dropped further after the loss of the two jets. Flight MH370, carrying 239 passengers and crew, disappeared in March last year, in what has become one of the greatest mysteries in aviation history. Last July, Flight MH17 was shot down over rebel-held territory in eastern Ukraine, and all 298 aboard were killed.