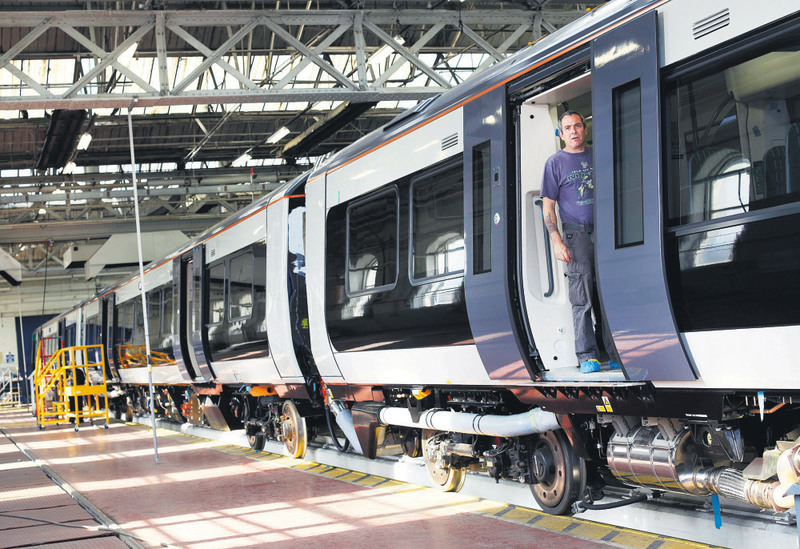 One of the world's top transportation specialists Bombardier's president of Central-Eastern Europe, Dieter John, said they were interested in involvement in high-speed train projects

As Canadian transportation giant Bombardier prepares for Turkey's tender to acquire 80 new high-speed trains, Bombardier Transportation's president of Central-Eastern Europe and the Commonwealth of Independent States (CIS), Dieter John, spoke to Daily Sabah on the sidelines of the International Transport Forum 2015 held in Leipzig, regarding their future plans in the Turkish market.

Bombardier Transportation is among the largest companies that manufacture and provide maintenance for rail transportation equipment, vehicles and systems for high-speed, conventional and urban rail transport. "Bombardier experienced a 10 percent growth despite the market growth only being 3 percent in total last year; we outperformed the market," John said, as the company with more than 34,000 employees made 7.2 billion euros in revenue last year.

John said they have been active in Turkey since 1976 and have been involved in various projects. Moreover, their trains are currently being used as part of the Ankara Metro, İzmir Metro, Ankaray and Bursaray light-rail systems and trams in Istanbul.

Turkey will hold a tender for new high-speed trains, which was previously postponed several times, and this tender may signal the beginning of future investment in Turkey. John said that Bombardier currently has a team in Turkey, and they intend to do more to increase their operational and market presence.

"We understand there are significant opportunities in Turkey. Of course, first is the 80 high speed, or very high speed trains. Second, are the locomotives – up to 120 locomotives will be needed. And third is the strong metro demand, especially if you just take Istanbul [into consideration]," John said. "We think we are in a good position there, we think we have the right products. We are ready to invest in the country. We are looking for very long-term partnerships."

Bombardier Transportation will join the tender with its ZEFIRO 380 high-speed trains. "ZEFIRO is our most economic and environmentally-friendly product. We have recently sold 50 trains and 400 cars to TrenItalia. It transports double the capacity, and is a very comfortable, high-quality train with low noise that is highly efficient and can reach up to 380 kilometers per hour while remaining economic, but can also run faster," he explained, adding that it received the most attraction out of their six or seven products at the InnoTrans fair held in Berlin.

Bombardier chose its domestic partner to participate with in the tender after a detailed search. However, John said they agreed with their partner not to disclose this partnership publicly until the tender.

Answering the question of whether they would consider Turkey as a local production hub after the tender, John said the localization requirement by the TCDD for this tender is around 60 percent – actually 53 percent – and this is already budgeted for in local production. Winning this tender would be a good opportunity and a reference point for Bombardier to consider a production hub. However, John said further projects in Turkey and in the region will be required.

"The Turkish economy will benefit from being part of our global supply chain," John said, an allusion to Bombardier using products made by Turkish manufacturers in future projects. John said the timing of the tender has constantly shifted for the last three quarters of a year, and now they are waiting for the new contract requirements and the end of the elections. "Regardless of a coalition or a single party government, there is a strong demand for mass transportation in urban areas. Whichever party gets a majority, this will not change. To have efficient and effective mass transportation means fast metros, and a metro should transport 50,000 people an hour in a city through a 3- to 5-meter-wide corridor. There is no more efficient means in terms of organization than a metro system," John said, reinforcing that new urban transportation projects will continue in Turkey.

"Turkey is a nucleus for other countries in the region. Of course, the geostrategic position of the country on the border between Europe and Asia is extremely interesting," John emphasized, referring to a possible role for Turkey and Bombardier Transportation's locomotives in the newly emerging rail freight corridors through Europe and Asia.

John also mentioned their TRAXX AC3 locomotives for Turkey's bid to renew and electrify its locomotive stock. "In November 2014, we staged a demonstration tour from Hungary to Istanbul, and the locomotive managed to pull the freight that is normally transported by two locomotives all the way throughout without malfunction, even for a 15-kilometer non-electrified section," John said.
RELATED TOPICS