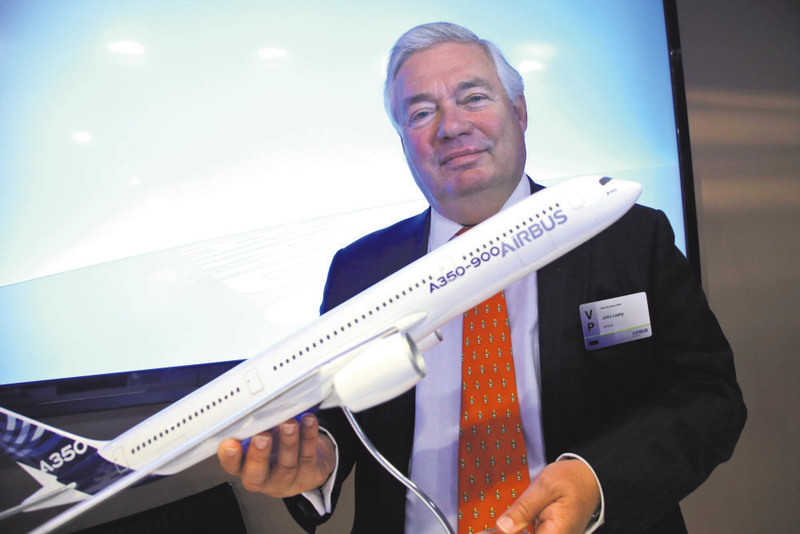 by Jun 15, 2015 12:00 am
Airbus and Boeing got another battle of their sales war off to a flying start at the world's premier air show near Paris on Monday with nearly $20 billion in orders. President François Hollande inaugurated the week-long Paris Air Show, which is expected to draw 315,000 visitors and 2,260 exhibitors from 47 countries.

France-based Airbus, which usually groups orders to announce at the show, got the competition going with two big deals - an $8 billion order for 50 planes from Saudi Arabian Airlines and a $6.4 billion order for 60 of the upcoming A320neos by GE Capital Aviation. Boeing followed up with the announcement that Qatar Airways had ordered 14 777s worth $4.8 billion. Hollande praised aviation's contribution to the French economy, saying it employed nearly 200,000 people and was worth close to 50 billion euros. "Aeronautics created 10,000 jobs last year and we hope to create almost the same number in 2015," he said. Among the aircraft making their debut at the air show will be new versions of the prototype all-electric plane from Airbus, the E-Fan, and its cleaner, quieter civilian helicopter, the H160.

They reflect the increasing focus on green innovations that are a theme this year, ahead of the global climate conference being held in Paris later this year, and with the air industry committed to being carbon-neutral by 2020.

Fuel efficiency is another big motivator. Boeing's promise that its next mid-range carrier, the 737 MAX, will offer a 20 percent increase in fuel savings means it has already garnered more than 2,700 orders, even though it will not be unveiled until next year.

The Airbus A320neo, with a 15 percent cut in fuel consumption, has already racked up a record 3,800 pre-orders before the first one has even left the production line.

Paris is the oldest and biggest air show in the world, having first taken place in 1909. But several big manufacturers have chosen to market themselves elsewhere recently, with Sweden's Saab, U.K.-based BAE Systems and America's Northrup Grumman all notable by their absence this year. There are fewer planes on display too, down from 150 to 100 compared with the last show in 2013. But the sales war between big hitters Airbus and Boeing is set to be just as fierce. Airbus pipped its U.S. rival at the last Paris Air Show two years ago, landing sales worth a total of $39.3 billion compared with Boeing's $38 billion. The market for civilian aircraft is booming, and Airbus said it expects 32,600 planes worth $4.9 trillion to be sold industry-wide over the next 20 years.

There will be 91 "aviation megacities" by 2034, putting huge pressure on existing infrastructure, Airbus executive John Leahy told reporters. Of 47 existing megacities, he said 39 are already congested. "How are you going to handle that? The only way is to combine flights into bigger planes," said Leahy, though Airbus is particularly hopeful for that switch given that it dominates the very large aircraft sector with its double-decker A380. The industry needs between 300 and 400 sales next week to keep its production lines ticking over through 2020, said Ben Moores, a senior analyst at IHS Aerospace, Defense and Security.

The aviation sector broke records last year with 2,888 orders, according to consultancy Deloitte Global, but the military sector is struggling with the U.S. shedding 168,000 defense jobs since 2010. Paris is a particularly important venue for smaller companies that have fewer chances to show off their wares. Canada is desperate for sales for its C Series regional plane, which gets its world premiere at the show, while Pakistan is hungry for its first-ever order for its JF-17 Thunder fighter aircraft.

The show at the Paris-Le Bourget airport north of the French capital opens its doors to the public from Friday, where they will get the chance to see some 40 aircraft in flying displays each day including fighter jets such as the JF-17, France's Rafale and Ukraine's Antonov 178. Airbus has also confirmed it will display its A400M military transport plane for the first time since a fatal crash in Spain last month caused by a massive engine failure.
Last Update: Jun 15, 2015 10:08 pm
RELATED TOPICS