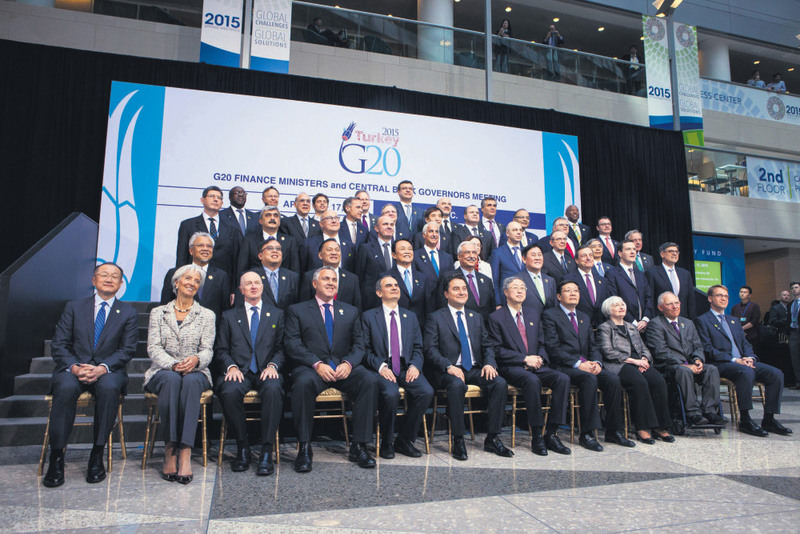 by Daily Sabah with Reuters Jun 15, 2015 12:00 am
The world's leading economies have narrowed down their commitments to boost global growth under a G20 plan and should be able to demonstrate progress by the end of Turkey's G20 presidency this year, a senior Turkish official said yesterday. The Group of 20 agreed in Brisbane last year to launch new measures to raise their collective gross domestic product growth and create millions of new jobs over the next five years. But the pledge, called the Brisbane Action Plan, entailed hundreds of commitments, raising questions over the ability of the G20 to effectively monitor their implementation.

"If we can achieve this goal in five years ... we will be adding 2 trillion dollars to world economic output, which is almost equal to the size of the Indian economy," Turkey's G20 'sherpa' Ayşe Sinirlioğlu told Reuters in an interview. "We said this year we should focus on 5-8 commitments that will have the most effect on growth ... Each country has now chosen these 5-8 commitments, and by the end of our presidency we will have the accountability report and then we will see how much progress we have made," she said. Sinirlioğlu, an economist and career diplomat who is the most senior official coordinating Turkey's G20 presidency after Deputy Prime Minister Ali Babacan, was speaking ahead of a meeting of deputy finance ministers in Bodrum this week.

At their first meeting under the Turkish presidency in February, G20 finance ministers sketched an uncertain outlook for global growth, with major economies running at different speeds and monetary policies diverging. The G20 finance ministers are due to meet again in September in Ankara before a G20 leaders' summit two months later. As well as focusing on implementing past commitments, which Turkish officials say is critical to the credibility of the G20, Turkey has made "inclusiveness" one of the key themes of its presidency, seeking to agree plans to reduce inequality within nations as well as giving low-income nations a greater voice. Sinirlioğlu said energy ministers would meet for the first time in the G20's history in Istanbul in October and that the focus would be on "access to energy" in sub-Saharan Africa.
Last Update: Jun 15, 2015 8:26 pm
RELATED TOPICS