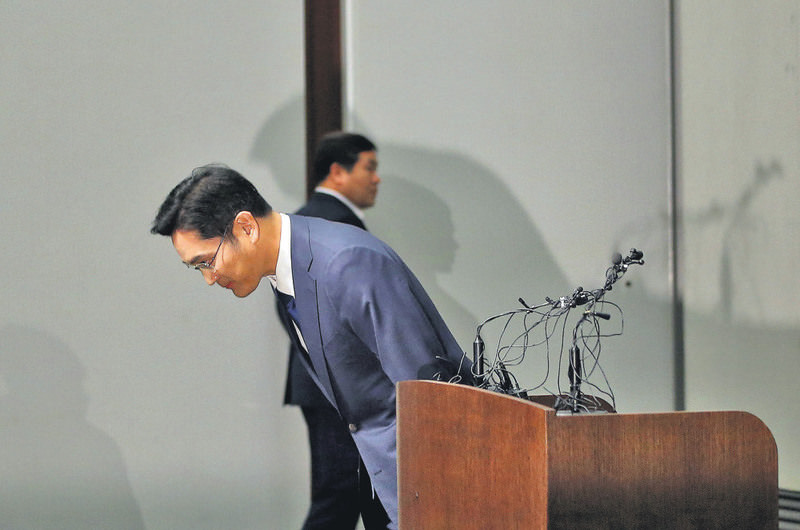 by Jun 23, 2015 12:00 am
The heir-apparent of South Korea's massive Samsung Group bowed in apology during a nationally televised address on Tuesday for failing to stop the spread of Middle East Respiratory Syndrome (MERS) at a Seoul hospital run by a group foundation.

About half of the 175 MERS cases in South Korea have been traced to the Samsung Medical Center, tarnishing the image of one of the country's most prestigious hospitals. The South Korean outbreak is the largest outside Saudi Arabia, and 27 patients have died.

Jay Y. Lee, the only son of Samsung Group patriarch Lee Kun-hee, said the conglomerate would do everything it could to stop the outbreak and revamp care at Samsung Medical Center, located in Seoul's wealthy Gangnam district. Lee Kun-hee has been hospitalised at the center since a heart attack last year. "Our Samsung Medical Center was unable to stop the MERS infection and its spread, and caused too much suffering and concern to the public. I bow my head in apology," the younger Lee said in rare public remarks by the man set to lead South Korea's largest family-run conglomerate, or chaebol. "We have failed to live up to the expectation and trust of the public," he said. Lee had previously visited the hospital during the outbreak but did not make a statement. The hospital's chief has also made public apologies.

South Korea's MERS outbreak, traced to a businessman who returned last month from the Middle East, has scared off tourists and dealt a blow to the economy as consumers stay home. Its health ministry said the outbreak appears to have levelled off, with new infections reported in recent days in the low single digits, including three yesterday. Lee, who turned 47 yesterday, became vice chairman of group flagship Samsung Electronics Co Ltd in 2012 and is expected to take the reins of that company and the overall group. "My father has been lying at this hospital for more than a year," he said. "I understand even to a small degree the worry and pain that patients and their families have experienced," he said.

Samsung Medical Center, which was founded in 1994, has been criticised after it was revealed that a MERS patient had been in its emergency ward for two-and-a-half days before being diagnosed, coming into contact with nearly 900 people, including staff. Such waits are not unusual at the most sought-after hospitals in Seoul, where patients can wait days for a room to open, a local custom that has been blamed by experts for exacerbating the country's MERS outbreak. The hospital later suspended most services when an emergency ward orderly tested positive for the virus after working for a number of days despite having symptoms and coming into contact with more than 200 people.