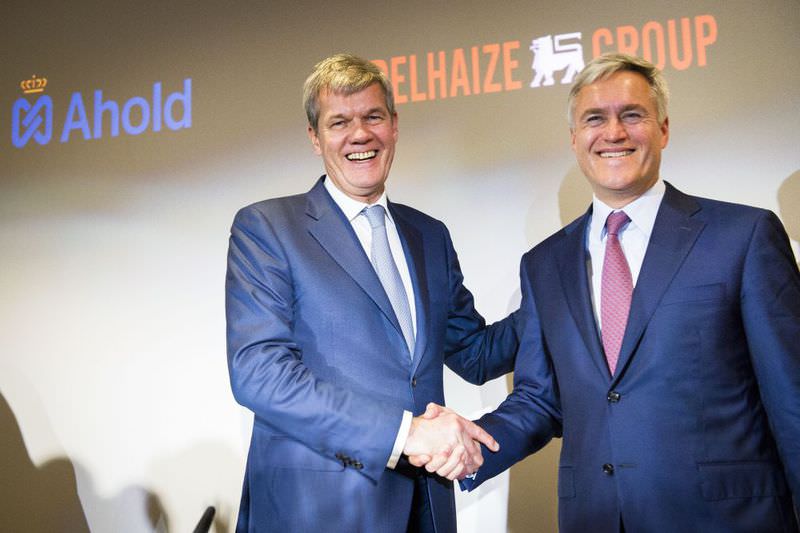 CEO of Dutch retail giant Ahold Dick Boer (L) shakes hands with his counterpart at Belgian rival Delhaize Frans Muller prior to a press conference yesterday in Brussels.
by Jun 24, 2015 12:00 am

Dutch retail giant Ahold and its Belgian rival Delhaize on Wednesday announced their merger, creating one of the world's largest retail companies with a turnover of more than 54 billion euros ($61 billion). "Ahold and Delhaize announce this morning their intention to combine their businesses through a merger of equals," a statement said, with the deal set to be concluded by mid-2016. Ahold shareholders will own 61 percent of the new company and Delhaize 39 percent, it added, creating a business with 6,500 shops and 375,000 employees.

Ahold shares jumped 3.09 percent in Amsterdam on Wednesday to 19.54 euros, while shares in Delhaize were down 4.79 percent to 83.81 euros in Brussels, the day after rising more than eight percent on rumours of the deal. The new company, which will be able to serve over 50 million customers a week in the United States and Europe, will save 500 million euros a year in synergies from the third year after fusion, it said.

Delhaize operates mainly in the United States, eastern Europe and Belgium, while Ahold owns Dutch supermarket chain Albert Heijn and Stop & Shop in the U.S. Delhaize, which owns supermarkets throughout Belgium, also operates the Hannaford and Food Lion stores in the eastern United States. As well as its U.S. stores, Ahold owns the Albert Heijn chain of supermarkets, which has more than 850 stores in the Netherlands and 25 in Belgium. Delhaize's share price jumped by more than eight percent on the Brussels stock market on Tuesday on rumours of the deal, before trading was suspended.

The merger will create the fifth-largest food retailer in the United States, with sales of over 54 billion euros and more than four percent of the US grocery market, according to analysts at Natixis. In Europe, the combined business will become the fourth-biggest food retailer, Natixis said. They said that the deal will involve one-off costs of 350 million euros that will create annual savings of 500 million euros year from the third year after the deal's completion. Ahold started out in 1887 as a small grocery shop opened by Albert Heijn and his wife in Oostzaan in Holland. Heijn's millionaire grandson, who was also called Albert, was credited with introducing barcodes to the retail market. Delhaize was founded in 1867 by brothers Jules and Edouard Delhaize, and their brother-in-law Jules Vieujant.
Last Update: Jun 24, 2015 10:38 pm
RELATED TOPICS