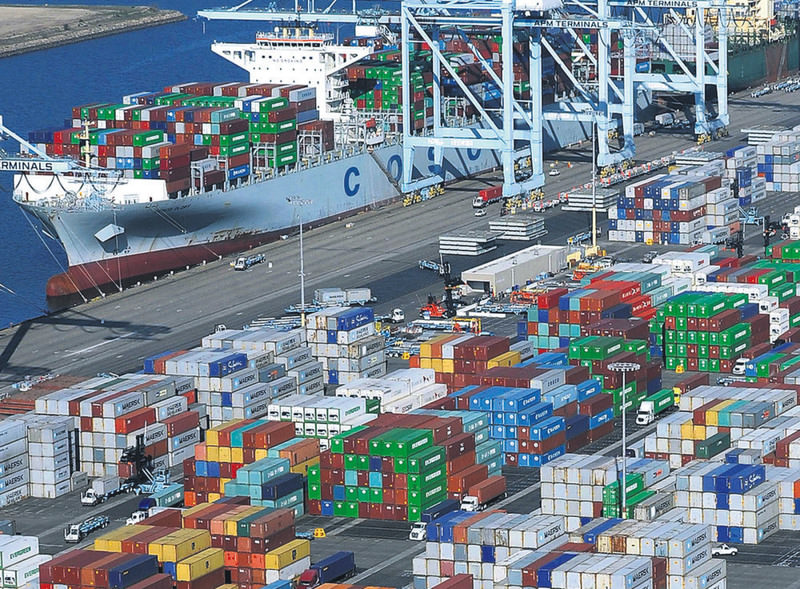 Shipping containers sit idle during a slowdown at the ports of Los Angeles and Long Beach, California.
by Remzi Kopar Jul 06, 2015 12:00 am

Buy Japan, Vietnam, U.S. media stocks and Mexican food stocks. Sell China. For investors wanting to take advantage of the Pacific Rim free trade pact, this is what a savvy stock strategy might look like

The 12 nations of the Trans-Pacific Partnership (TPP) could wrap up an agreement in coming weeks, after the pact cleared a major U.S. hurdle with Congress's decision to give broad negotiating authority to President Barack Obama. The deal, which covers 40 percent of the global economy and is expected to deliver $295 billion in annual global economic gains, will have long-term implications for Pacific Rim companies, and for competitors in countries that are late to the party or don't join. Although details of the deal are still under wraps and full implementation is years down the track, fund managers are starting to look at the implications for long-term positioning.

According to an analysis by the Peterson Institute for International Economics and the East-West Center, the United States and Japan - the bloc's economic heavyweights - are likely to win the most in dollar terms, with big boosts to Japanese car and chemical exports and U.S. services.

"It's definitely on our radar," said Geoffrey Pazzanese, who oversees non-U.S. equity assets for Federated Investors, which has more than $350 billion in assets under management. "We have a very large overweight in Japan and to me the biggest winner, country-wise, will be Japan."

In Japan, textiles and transport equipment are among the expected winners. Japanese exports of transport equipment are seen rising 24 percent by 2025, according to projections in the Peterson study. Still, diffuse global supply chains muddy the benefits, and costs. Seventy percent of Japanese-branded cars sold in the United States are built in North America, with Japanese makers such as Nissan Motor Co and Toyota Motor Corp ramping up investment in Mexico.

Mexico, Chile and Peru had already benefited from past trade deals and could do even better with the TPP since it goes beyond traditional tariff-cutting pacts to set common standards in areas like intellectual property, said Stacy Steimel, Latin America Managing Director and Investment Strategist for PineBridge Investments.

"These countries have been able to increase their potential GDP growth on the basis of the wide range of trade agreements that they have negotiated and pursued. This one, because it goes even further, could bring even more benefits." The study suggests that Southeast Asian nations Vietnam and Malaysia will see the biggest relative gains, both economy-wide and by sector. The biggest winner within low-wage Vietnam is expected to be clothing and footwear, with the study showing value-added output up 44.6 percent in 2025 and exports up $52 billion.

Potential beneficiaries in the sector, which ships 60 percent of its output to TPP countries, include Thanh Cong Textile Garment Investment Trading Company and Northern Textiles and Garments. Meanwhile, the $57 billion U.S. yarn and textile industry is hoping U.S. negotiators win protections for a sector that is rebounding from a decade-long slump and sustains more than 1.5 million regional jobs. Vietnam's stock market offers limited investment options, however. Although the Ho Chi Minh Stock Exchange's market capitalization rose 15 percent between 2012 and 2014, it is still just 1 percent of Tokyo's and 10 percent of Kuala Lumpur's.

In Malaysia, machinery and electrical equipment are seen by the study as big beneficiaries, getting a combined $26 billion export boost for products such as those made by Muhibbah Engineering, Sime Darby Industrial, Favelle Favco and Khind Holdings

Mexico's deputy trade minister has said the country hopes to double agriculture exports to Japan to about $2 billion a year, while exports of personal hygiene products and other cosmetics to Japan would also increase. That could help Kimberly-Clark de Mexico, which makes personal care and household hygiene products, and Genomma

Lab Internacional, a maker of personal care products. Mexican food companies Gruma and Grupo Bimbo could be in line to benefit from stronger farm exports.

Other major winners could include dairy giant Fonterra, if New Zealand gets the access to dairy markets in the United States, Canada and Japan that it is seeking. Air freight companies United Parcel Service and FedEx Corp stand to gain from increased shipping demand. Overall, if the TPP was the only factor affecting stocks, his trading strategy would be to buy Mexico, Japan and U.S. agriculture, tech, media and telecommunications, and avoid countries sitting out at least the first round, like Indonesia, the Philippines and China.
Last Update: Jul 06, 2015 10:02 pm
RELATED TOPICS