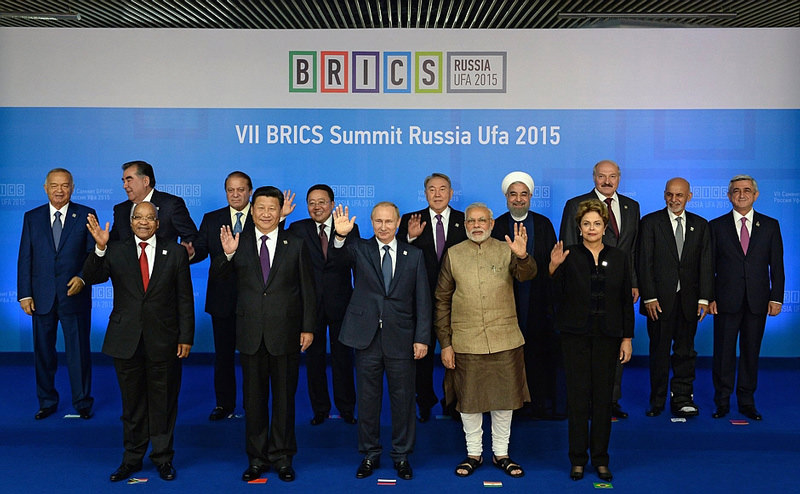 In address to a leaders' summit in Ufa, Russia, Putin said: "In modern conditions it is important to realize the idea of pairing the EEU [Eurasian Economic Union] and the economic belt of the Silk Road."

Indian Prime Minister Narendra Modi congratulated Pakistan for also joining the grouping and said the organization has the potential to promote unity in the region.

"The future of prosperity rests on the foundation of peace. We will work with SCO to combat terrorism and extremism," said Modi, adding: "We will support efforts to create an environment that eases barriers and facilitates trade and investments in the region."

Putin added that Belarus would be promoted to SCO observer status while Azerbaijan, Armenia, Cambodia and Nepal will join as dialogue partners.

Established in 1996, the SCO is a political, economic and military organization that incorporates China, Russia, Kazakhstan, Kyrgyzstan Tajikistan and Uzbekistan.

Turkey, Sri Lanka and Belarus are attending the summit, which opened on Friday, as dialogue partners while Afghanistan, India, Iran, Mongolia and Pakistan have observer status.

On the sidelines of the summit earlier on Friday, Modi met with Pakistani Prime Minister Nawaz Sharif for the first time in more than a year.

The two leaders, whose countries share a longstanding and bitter rivalry, agreed that Modi will visit Pakistan next year and to cooperate with each other on security matters.
Last Update: Jul 10, 2015 6:42 pm
RELATED TOPICS