Greek banks remain closed even after a possible deal 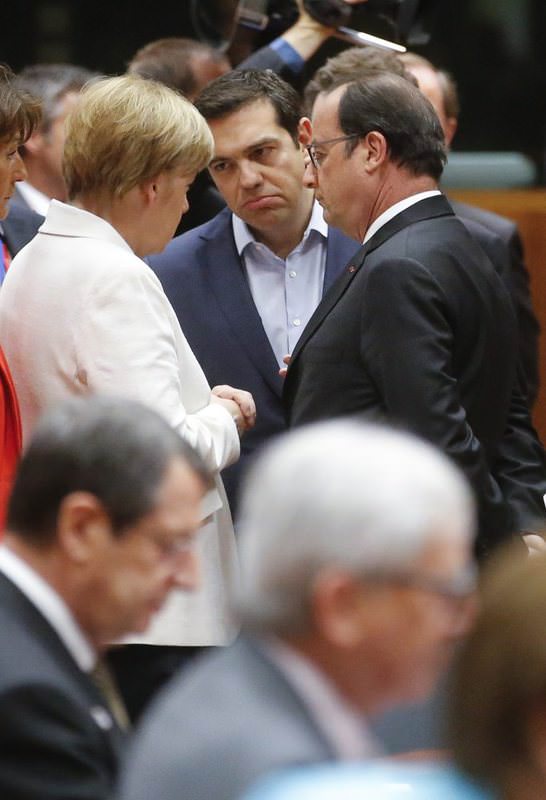 Greek Prime Minister Tsipras (C) talks with German Chancellor Merkel (L) and French President Hollande at the start of eurozone leaders' summit on the Greek crisis at the European Council headquarters in Brussels.
by Daily Sabah with Wires Jul 12, 2015 12:00 am

Eurozone finance ministers fail to reach a deal on new Greek bailout plan after a two-day summit in Brussels before the meeting of leaders. Capital controls will continue for two more months in Greece leaving people with limited access to money, even after a possible deal

Greek Minister of Economy Giorgos Stathakis said that the capital controls on banks, limiting the cash receipts from ATMs, will remain active for at least two more months. Greece's prime minister and skeptical European leaders sought desperately yesterday to overcome their fundamental differences aiming to produce a tentative agreement to stave off an immediate financial collapse in Greece that would reverberate across the continent. Eurozone finance ministers have drafted a statement demanding a greater reform effort from Greece, if it is to receive a new bailout, according a report leaked to Reuters yesterday. Facing a self-imposed Sunday deadline, the European nations using the shared euro currency were still seeking more proof from Greek Prime Minister Alexis Tsipras that he could be fully trusted to enact wide-ranging economic reforms to safeguard Greece's future in the common euro currency. The summit was continuing as Daily Sabah went to print. The European leaders' summit, which is planned to be held with the attendance of the leaders of the European Union's 28 countries, after the meeting of eurozone leaders was cancelled yesterday.

Transactions such as withdrawing cash from personal accounts and transferring money abroad will continue to be limited in Greece. This extraordinary regulation was implemented by the Greek government after the European Central Bank (ECB) decided to peg the Emergency Liquidity Aid (ELA), in order to eliminate the possibility of a financial collapse caused by bank runs. The Athens Stock Exchange (ASE) and all commercial banks have been closed since June 29, and the 60-euro-limit on ATM withdrawals are still enforced. If the sides can reach an agreement in Brussels, the banks are expected to open after the agreement is sealed.

Tsipras came into the summit looking for a compromise deal. "We owe that to the peoples of Europe who want Europe united and not divided," he said. "We can reach an agreement tonight if all parties want it."

German Chancellor Angela Merkel, however, insisted that Germany would not sway from its stance that Greece needs to do much more to get any help just to save its position in the 19-nation eurozone. "There will not an agreement at all costs," she said, coming into Sunday's summit meeting. "Nerves are tense, but it has to be clear that the advantages outweigh the disadvantages."

Highlighting the differences within the creditors' camp, French President Francois Hollande insisted it was vital to keep Greece in the currency club and avoid a so-called "Grexit." If Greece had to leave the euro currency "it's Europe that would go backward," Hollande said. "And that I do not want."

Greece has asked Europe's bailout fund for a 53.5 billion-euro ($59.5 billion) 3-year financial package but many officials in Brussels say the figure will have to be much higher and insist on tough Greek austerity measures. This would be Greece's third bailout in five years.

The draft statement expecting greater efforts from Greece was reportedly discussed by the ministers late on Saturday, before they resumed talks on Sunday.

"The Eurogroup welcomes the assessment by the institutions that the list of policy commitments of the Greek authorities represents a basis to start the negotiations in a new program. The Eurogroup also agrees with the institutions that the package needs to be significantly strengthened and broadened in order to provide for appropriate conditionality for a possible three-year European Stability Mechanism program," the statement said. Further reforms demanded by the Eurogroup include full compliance with the medium-term primary surplus target of 3.5 percent of GDP by 2018, according to a yearly schedule to be agreed with the institutions, more ambitious pension reforms on labor markets, undertaking rigorous reviews of collective bargaining, industrial action and collective dismissals in line with the timetable and the approach suggested by the institutions. Any changes should be based on international and European best practices, and should not involve a return to past policy settings that are not compatible with the goals of promoting sustainable and inclusive growth, the adoption of the necessary steps to strengthen the financial sector, including decisive action on non-performing loans.
Last Update: Jul 12, 2015 8:01 pm
RELATED TOPICS