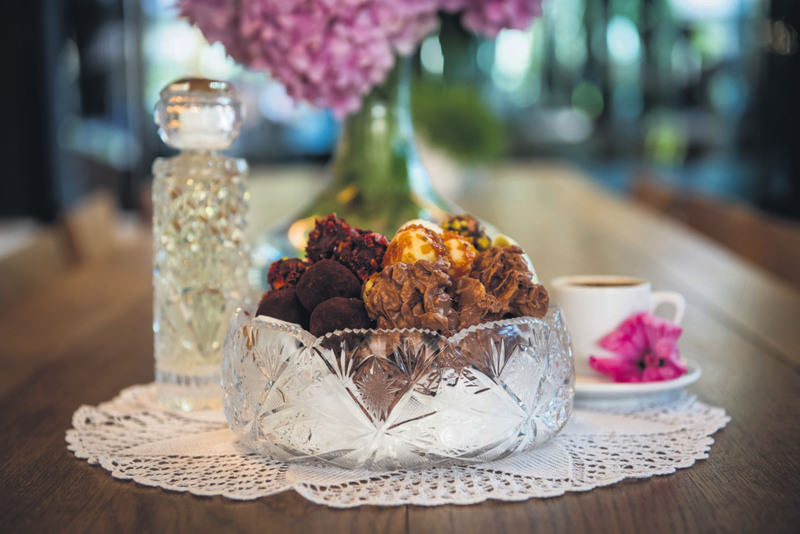 All sorts of sweets, including chocolate, Turkish delight and wrapped candy are considered as Ramadan eid essentials, which are offered to family and friends during house visits.
by Anadolu Agency Jul 13, 2015 12:00 am

As usual, Eid al-Fitr is expected to give Turkish retailers a big boost in demand. Online shopping numbers went up 29 percent during the final week of fasting. Travel purchase numbers also jump with increased family visits

"Eid al-Fitr is always good for us, why should this year be different?" asked Bayram, who works behind the counter at the Erzincan Mandıra grocery store in Ümitköy, Ankara. The three-day festival, which takes place at the end of Ramadan, usually gives retailers a big boost, as Turks purchase large amounts of candy and gifts for visits to relatives.

Analysts interviewed by Anadolu Agency (AA) said this year will be slightly different, as the political context is expected to dampen sales.

"Consumers may spend a bit less this year, as they are concerned about the formation of a new government in Turkey. As negotiations continue, the Justice and Development Party (AK Party), which received 40.87 percent of the vote, is attempting to form a coalition ... Consumers are jittery. In this context, consumers tend to save money rather than spend it," said Unsal Ban, a professor of economics at THK University in Istanbul. "But consumers will increase spending to a certain degree," Ban added.

Sales made via computer and cellphones see an important jump just ahead of and during the end-of-Ramadan festival, according to analysts at the consultancy firm Criteo. "Just before those three days, consumers still purchase. The share of mobile sales is up 29 percent during the final week of fasting. And during the feast days, while people tend to stay away from their computers, they still have their phones in their pockets, which they use to make purchases," Criteo analysts told AA.

"There will be somewhat fewer people traveling to visit other family members this year, though holiday feasts are always popular. Of course, tourism is always highest during this holiday," commented Ray Gaul, an expert on Middle Eastern retailing at the consultancy firm Kanta Retail. "Turkish consumers actually begin preparing for the holiday in June, which is when retailers see the largest spike in food purchases. But during the holiday itself, there is a sharp jump in non-food purchases," Gaul explained. "This is because Turkish consumers tend to make important financial decisions during the festival at the end of Ramadan. This is the time when Turkish consumers decide to remodel the house, or perhaps buy new furniture," he added.

Bendevi Palandöken, president of the Confederation of Turkish Tradesmen and Craftsmen, agreed that consumer spending would be steady this year. "During the Ramadan festival, you can feel the market dynamism. Tradesmen also see a sharp jump in sales during this time," Palandöken said, as he forecasted a 30-percent increase in retail spending during the holiday. Nothing is more important to a consumer during the Ramadan festival than buying candy and chocolate, as this makes the end to the fasting during Ramadan that much sweeter. Palandöken stressed that a wide variety of sweets are available for the festival, with a price range making candy accessible to every consumer. "Each year during the Ramadan festival, the size of the candy sector climbs to about TL 500 million ($185.7 million), and the tonnage size reaches roughly 40,000-45,000, the highest amount in the year," he said.

But consumers may be somewhat daunted by higher prices this year. "Food prices are the headline item in Turkish inflation," said Attila Yeşilada, an economist with Global Source Partners in Istanbul. "Chocolate prices, in particular, are about 40 percent higher than usual. This may sour consumers on candy purchases to some extent, but enthusiasm for feasting with relatives may overcome considerations of thrift in this period," he added.

Many consumers travel to visit relatives during the Ramadan festival. Criteo said that travel purchases climb by 57 percent during the early days of Ramadan, and decline until the last three days and then jump again.

But more consumers will stay home this year, according to Palandöken, and those that do not travel will also purchase less. "On the other hand, those who do travel spend more, and they tend to spend it at their destination. So, retail sales see a more important spike in the provinces than in the major metropolitan areas," he said.

Some retailers get an additional advantage ahead of Ramadan, however. "Many consumers decide to fix up their homes and improve their gardens ahead of the Ramadan festival because they want to impress visiting relatives," Gaul said. As a result, do-it-yourself stores and garden centers also see a particularly sharp rise in sales in May and June, Gaul explained.

Ramadan and the festival are meant to be happy times in Turkey, and consumers particularly enjoy the festival - all of which makes retailers especially happy.
Last Update: Jul 13, 2015 10:38 pm
RELATED TOPICS