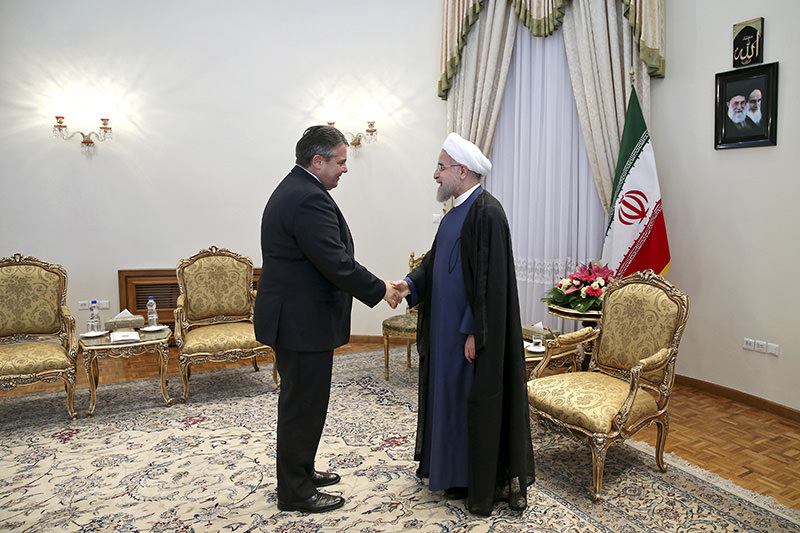 The historic nuclear deal between the world's six major powers and Iran fails to satisfy the Jewish community, who insists Iran to recognize Israel as a state to be involved in global trade and blames the ones welcoming the opportunity

The head of the World Jewish Congress Ronald Lauder sharply criticized German Economy Minister Sigmar Gabriel yesterday for his recent visit to Iran, accusing him of putting business interests before morals and calling his approach to Tehran naive.

Joined by a delegation of about a dozen industry leaders, Gabriel paid a three-day visit to Iran from Sunday to Tuesday and met with Iranian President Hassan Rouhani and his top ministers, marking the first trade talks between a Western politician and Tehran since the country reached a historic nuclear agreement with six world powers earlier this month. Gabriel, who acts as a deputy for Chancellor Angela Merkel and heads Germany's center-left Social Democratic Party (SPD), said that a joint commission would launch regular trade talks in early 2016 after a hiatus of 14 years due to a drawn-out nuclear dispute. The Association of German Chambers of Commerce and Industry hopes to quadruple exports to Iran within the next four years, raising it from 2.39 billion euros ($2.6 billion) in 2014 to more than 10 billion euros.

The trip irritated Iran's sworn enemy Israel, with whom Germany has cultivated an especially close relationship since World War Two, when the Nazis killed six million Jews. The Israeli ambassador privately voiced his concerns about Gabriel's visit to the German government. "It is somewhat irritating that Germany's vice chancellor and economics minister waited only five days before flying to Tehran with a delegation of German business leaders," Lauder said in a statement provided to Reuters.

Lauder said Gabriel's offer to function as a bridge builder between Iran and Israel was naive given what he described as ongoing agitation from Tehran against Israel and the United States. Lauder even went too far and criticized the nuclear deal, which has been viewed as a historic step to connect the energy-rich Middle Eastern country to the world. "It would have been much better to make new commercial relations with Iran dependent on a change in the regime's stance toward Israel," Lauder said.

Since the deal was announced, Israel's Prime Minister Benjamin Netanyahu has condemned it as a "stunning historic mistake," saying Israel was not bound by the agreement and suggesting that military action remains an option.

Gabriel defended his visit to Tehran. The nuclear deal with Iran formed a "good basis" for a normalization of relations, a spokeswoman for the economy ministry said. A government spokeswoman added that Gabriel coordinated his plan to visit Iran with Chancellor Angela Merkel.

On his trip, Gabriel's agenda included more than merely economic issues. German officials have not hesitated to articulate their country's support for Israel to be recognized as a state by Iran. Gabriel said it was important that Iran improve ties with Israel and acknowledge its right to exist. He also announced plans to revive long-dormant talks between the two governments and industry on economic ties.

The timing of Gabriel's trip, so soon after the nuclear deal was struck, was also a source of debate within the German government. Some also felt it would have been better if Foreign Minister Frank-Walter Steinmeier, who helped negotiate the agreement, went there first, so as not to give the impression that Germany's priority was striking business deals.

French Foreign Minister Laurent Fabius, who also took part in the nuclear talks, is due to travel to Iran next week. For decades, Germany was Iran's biggest trading partner in Europe, but exports slumped after the West tightened sanctions imposed over Iran's nuclear program. German machinery, automobile, healthcare and renewable energy firms would likely be the biggest beneficiaries of an opening up of the Iranian market. The nuclear agreement reached between Iran and the U.S., China, France, Britain, Russia and Germany earlier this month limits Iran's nuclear capability, while lifting economic sanctions on the energy-rich Middle Eastern country.
Last Update: Jul 23, 2015 7:18 am
RELATED TOPICS