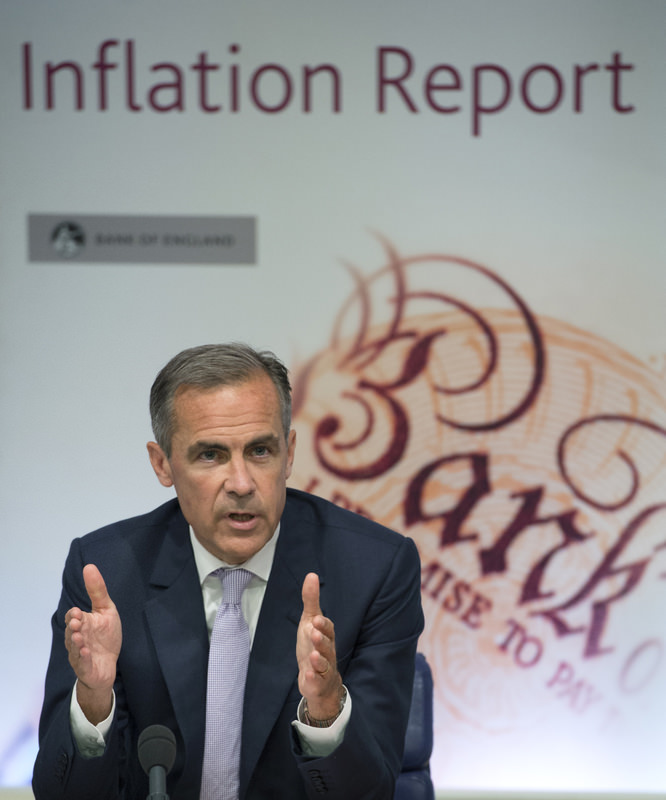 by Daily Sabah with Wires Aug 07, 2015 12:00 am
The Bank of England (BoE) appeared in no rush to start raising interest rates on Thursday, with minutes showing just one top policymaker voted to do so this week while the bank forecasts only a slow pick-up in inflation, which sits at zero. Sterling fell to its lowest in nearly two weeks against the dollar, while British government bonds rallied.

BoE Governor Mark Carney reiterated that the time for an interest rate hike is drawing closer. "However, the exact timing of the first move cannot be predicted in advance; it will be the product of economic developments and prospects. In short, it will be data dependent," Carney said in a news conference.

Three weeks ago, Carney said the decision when to hike interest rates would likely come into "sharper relief" around the end of the year. He emphasized on Thursday that this was his own view and that it had not changed since.

Most economists taking part in a Reuters poll had expected two or even three members of the Monetary Policy Committee to vote for a rate hike. Markets pushed out their bets on when the BoE would start to raise rates to June next year from May.

In the end, only Ian McCafferty wanted to hike rates at the August meeting which ended on Wednesday, resulting in an 8-1 vote in favor of keeping rates at their record low of 0.5 percent, the BoE said.

BNP Paribas economist Dominic Bryant said expectations that the BoE could move as soon as this year now looked a stretch, though a move in February was still a possibility.

The MPC had previously maintained a united front on rates since January, after a fall in oil prices last year set back the prospects of the first rate rise since 2007.

Few economists expect the BoE to tighten policy before the United States Federal Reserve, which is expected to raise rates later this year.

The bank said it expected inflation to be back to its 2.0 percent target in two years' time, in line with its previous forecast made in May despite a renewed plunge in oil prices and a strengthening of sterling in the last three months.

"The most striking development in the UK over the past year has been the fall in CPI inflation, which edged back down to zero percent in June," Carney said at his news conference.

The bank said its forecasts were based on bets in financial markets that interest rates would only start to rise in the second quarter of next year. Economists mostly expect a first rate hike in February. The strong pound and low fuel costs would continue to push down inflation until at least the middle of next year, the bank said.

Minutes of the bank's monthly meeting showed "some members" saw a risk the inflation could pick up more strongly than the central forecast. But the overall tone of the minutes and the bank's quarterly economic forecasts - which were released together for the first time - suggested the central bank was focused on the potential for the surge in sterling to keep a lid on inflation.

Stock market turmoil in China and Greece's unresolved debt problems cast a small shadow on the global economic outlook, the BoE said. The BoE also noted that Britain's weak productivity growth was finally on the rise, which would also help mute inflation even after wages grew surprisingly strongly in recent months. It noted a fall in employment but said it was unclear if this reflected slower demand or an increased difficulty in employers finding qualified workers.

The bank raised its forecasts for Britain's overall economic growth this year to 2.8 percent from 2.5 percent in its May forecasts but kept its growth projections for the following years largely unchanged. McCafferty had voted to raise rates in late 2014, along with fellow MPC member Martin Weale. But minority support for a change in policy at the BoE rarely translates rapidly into a shift in the majority's view. Carney said last month that the decision on when to raise interest rates would only come into sharper focus around the turn of the year.

On the other hand, international rating company Moody's has changed the outlook on the U.K. banking system from negative to stable, reflecting the expectation that most U.K. banks will maintain solid financial fundamentals over the next 12-18 months, resulting from a favorable operating environment. Banks' asset quality indicators would likely remain strong, despite the prospect of gradual and moderate increases in the Bank of England's base rate, said Moody's in a report, titled "Banking System Outlook: United Kingdom" released on Thursday.
RELATED TOPICS