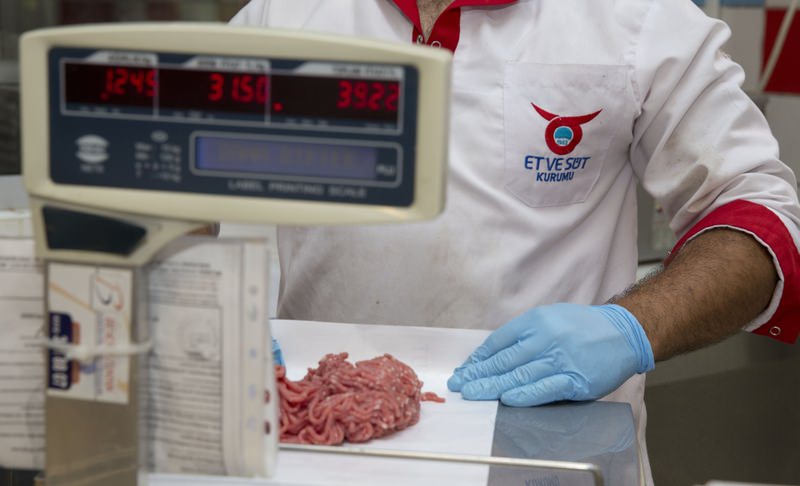 Sector specialists believe regulating the market will be a better solution than intervention. They suggest organizing the meat supply, and say importing and stockpiling meat will not be enough to control the rising prices

With the government deciding to import red meat to curb the recent price surge, with one kilogram having reached TL 40 ($14.46), the Meat and Dairy Products Agency (ESK) put forward certain measures to protect customers. The ESK suggests that red meat should be sold to customers for 27 percent below the market price and Turkey should have livestock reserves instead of keeping frozen meat.

Speaking to Daily Sabah about the recent price upsurge, Turkish Red Meat Producers Association President, Bülent Tunç, said it is of great importance to protect consumers, adding: "Some claim that red meat producers act in a self-benefiting way and make unearned income, which offends us greatly. They say this to make small producers withdraw from the market and to leave it to big actors." Tunç also called on the government to take steps to protect producers.

According to Tunç, producers sell one kilogram of red meat for TL 25, which has reached TL 40 after it is distributed to butcher shops and supermarkets. This is not a high price considering the high cost of producing it, Tunç said, suggesting that price regulations should be introduced to prevent such pricing games. Tunç proposed that the ESK should import livestock in order to allow consumers to eat meat at affordable prices and to overcome problems experienced with red meat production. He said the only way of allowing people to have read meat at convenient prices is a model where producers dedicate 20 percent of their operating capacity to the ESK in line with a contract. "Let producers feed and raise animals and give them to the ESK. In this way, the ESK will have livestock available and add it to the market by butchering it whenever it is needed. This will be a more useful solution to alleviate the problems experienced by both producers and consumers than stocking frozen meat," he added.

Previously, the president of the Federation of Food and Drink Industry Associations of Turkey, Şemsi Kopuz, said meat imports initiated by the Food, Agriculture and Livestock Ministry would not be enough to reduce prices. At a press conference, Kopuz said the price of red meat has increased by almost 30 percent over a year and keeps increasing, which is why the ministry is trying to stabilize prices by importing. Kopuz drew attention to the upcoming Qurban Bayramı, also known as Eid al-Adha (Festival of Sacrifice) as one of the underlying reasons that meat prices are up, since there will be a huge demand, but is unlikely to be significantly affected by the prices. Suggesting that Turkey needs to revise its long-term agriculture and stockbreeding policy, Kopuz said production of plants used for animal feed and the number of small cattle should be increased, agricultural statistics must be reviewed and government regulation and support must be introduced in a more organized manner. In the last weeks, the Central Bank of the Republic of Turkey (CBRT) reported that the increase in red meat prices was negatively affecting inflation.
RELATED TOPICS