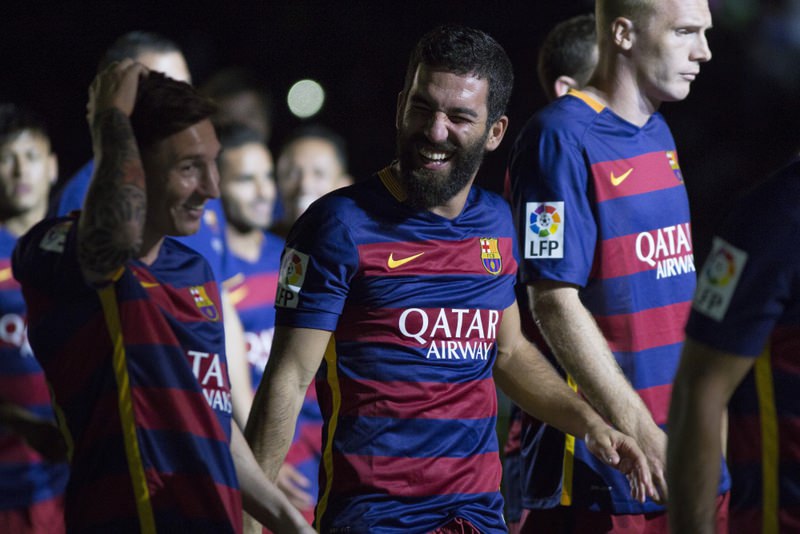 Barcelona signed Turkey midfielder Arda Turan from Atletico Madrid in July. Turan will not be able to play for the club until January as Barca are unable to register new players until 2016.
by Daily Sabah with Reuters Aug 21, 2015 12:00 am

While Turkey has been debating the pool system, Spain's more modest clubs will have greater incentive to fight for their top-flight status thanks to a new framework for the individual sale of TV rights

When La Liga kicks off on Saturday, some of Spain's more modest clubs will have an even greater incentive to fight for their top-flight status thanks to a new framework for the collective and more lucrative sale of television rights. Unlike in other major European leagues, La Liga teams had been negotiating individual deals with broadcasters, a system that allowed heavyweights Real Madrid and Barcelona to hoover up roughly half the available TV cash between them. The remaining teams have long been earning far less than rivals in countries like England, France, Italy and Germany but that is starting to change thanks to a government decree passed earlier this year after years of wrangling.

In Turkey, there have also been discussions on television rights deals. There is a pool system in Turkey and every Turkish club has a share. However, powerhouses like Fenerbahçe, Galatasaray, Beşiktaş, Trabzonspor and Bursaspor have bigger shares thanks to their championship titles. The teams that rank in the first six of the Super League standings can have 9 percent. Forty-five percent of the share is divided among the five teams that have won a championship title. However, Fenerbahçe Chairman Aziz Yıldırım wants Fenerbahçe to get out of the system. He argues that the current system is unfair to Fenerbahçe. Yıldırım claims that Fenerbahçe deserve a bigger share because they have a bigger ratings potential due to their estimated 25 million fans in Turkey. Yıldırım wants Fenerbahçe to be a maverick club and sell their own rights to whatever TV channel they want. In May, Turkish Football Association Chairman Yıldırım Demirören challenged Yıldırım and said that no club can get out of the current pool system. "No football club can have their matches broadcast on any channel that doesn't have TV rights that are not granted by the Turkish Football Federation."

Although the law is not due to take effect until the 2016-17 season, Spain's professional league (La Liga) has already organized the joint sale of rights for 2015-16 that will yield at least 1 billion euros, up from around 750 million. Spanish clubs will still be enviously eyeing the English Premier League's TV deal, worth more than 5 billion pounds for the 2016-17 season, but many can begin to place themselves on a firmer financial footing and pay off some of their debts to the tax man. Real and Barca will continue to earn roughly the same, at least for the time being, and significantly more than their major rivals in Europe, but the effect on lesser clubs will be dramatic, according to Placido Rodriguez, a professor of economics at Oviedo University.

"For the small La Liga teams the government decree is a blessing from on high," Rodriguez, a former chairman of Sporting Gijon, told Reuters. "The gap between Real and Barca and the rest of the clubs will shrink," he added.

"But we will still remain far behind the Premier League and the Bundesliga, where the difference between those earning the most from TV and those earning least is two to one or smaller."

A joint study by the Center for Sport Business Management at the University of Navarra and consulting firm Grant Thornton published last month suggested clubs like Las Palmas, Gijon and Real Betis, who were all promoted to La Liga last season, as well as Rayo Vallecano, Eibar and Malaga will earn far more. Las Palmas and Gijon will reap as much as 20 million euros, increases of 574 percent and 569 percent respectively, while Seville-based Betis will boost their TV income by 136 percent to as much as 25 million euros.

Real and Barca (140-160 million euros) will still earn about three times as much as next-ranked Atletico Madrid and Valencia (45-55 million), with Sevilla and Athletic Bilbao (35-40 million) close behind.

Spare a thought, though, for Elche, who managed to avoid the drop to the second division last term but were kicked out of La Liga over unpaid tax debts and replaced by relegated Eibar.

Although most have welcomed the government decree, it has also caused friction between the professional league and the government on one side and the Spanish soccer federation (RFEF) and the players' union (AFE) on the other.

Among other gripes, the RFEF and AFE felt they had not been consulted sufficiently and the federation threatened to suspend competition and the union considered strike action before an uneasy truce was agreed.
Last Update: Aug 21, 2015 1:08 am
RELATED TOPICS