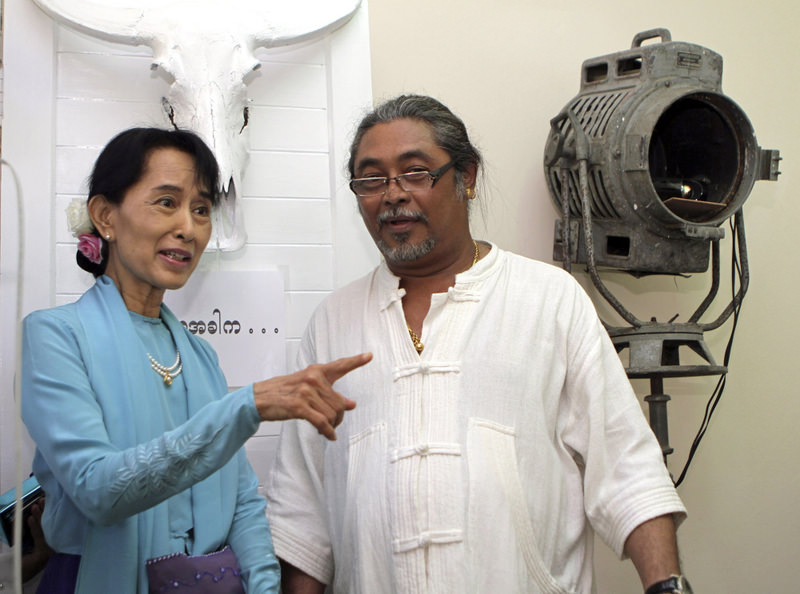 Myanmar's former movie star Kyaw Thu has buried 150,000 people for free since he launched a funeral service mainly for the poor, earning him a 2015 Magsaysay prize due to be awarded at the end of August

Kyaw Thu, 55, spent the first part of his adult life as Myanmar's most popular actor, a heroic heartthrob who starred in more than 100 local productions. But in 2001, inspired by a conversation with a monk, he began offering free funerals, attending numerous services and making the final arrangements for thousands of people from all walks of life. "In Myanmar, there is a lot of hardship from living and death, so I want to ease the sorrow of the bereaved family," Kyaw Thu said of the Free Funeral Service Society, the charity he co-founded 15 years ago that has provided around 150,000 ceremonies. His efforts have been recognized by the committee for the Philippine-based Magsaysay Prize, sometimes seen as Asia's answer to the Nobel Peace Prize, which made him one of this year's laureates. Kyaw Thu said he was grateful for the award, but that winning prizes were not his motivation. "I also think I got this prize not only because of me but also the unity of donors, volunteers, and staff all together," he told dpa.

The actor's popularity and drive for social change have made him a household name in Myanmar, where social services were left in ruins after decades of military dictatorship that ended in 2011. He has buried rich and poor alike, and people from all sides of the country's political conflicts, including pro-democracy activists and army-linked elite politicians. The actor said he also tries to use his status to help the bereaved. "Most Myanmar people love to see me. When I go to a funeral service and the home of the family, they feel happy to see a famous actor and almost forget their sorrow," he said, adding that he attended a funeral a day for many years, but now visits two per week.

In recent years, the Free Funeral Service Society, which receives around $4,000 in public donations per month, has expanded its scope. It also runs educational programs, emergency aid initiatives, a health clinic and a 24-hour ambulance service from its northern Yangon headquarters.

The organization has 12 ambulances, employs 110 staff and around 500 volunteers, while it operates 35 hearses. The conspicuous vehicles - sometimes driven by Kyaw Thu himself - boast a modified rear area for the coffin that resembles a small, gold-colored Buddhist temple, complete with ornate dragons. The free funeral services for the poor include transport, preparing of the body for viewing, and cremation, arrangements that otherwise cost about 100 dollars. "Kyaw Thu helped us during our time of grieving," Yangon resident Than Sein said. "He came to my father and mother's funeral [and] helped out. Here, a funeral service costs a lot. We are poor people and have great difficulty to afford it."

Ma Thida, a well-known writer and president of the Myanmar chapter of PEN International, said the organization had provided an important example of social activism during army rule and positively changed attitudes in society. "In the past, performing funeral services was viewed as a job for people with low standing, so it's very important to change these perceptions," she said.

A charismatic 56-year-old with a ponytail and beard turned mostly grey, Kyaw Thu sported gold rings with mythical animals and chains and bracelets made of precious stone and prayer beads as he described his life's transitions. The son of a family who owned a cinema in Yangon, his talent was spotted in 1986 by a film production company which asked the then-student to star in his first movie. It became a hit and was followed by many other popular films. But Kyaw Thu felt something was lacking. One day a prominent monk told his daughter about the fate of actors in the afterlife. He said they go to a "bad place," Kyaw Thu remembered, "because they make people laugh, cry and be angry during their movies," behavior not in line with Buddhist virtues. "So I wanted to do humanitarian work," he told dpa. Kyaw Thu decided to help movie director named Thu Kha, who was setting up a free funeral service after being moved by seeing the poor abandon their loved ones' remains to mass cremations. Like many other civil society initiatives, the Free Funeral Service Society met with resistance from the authorities. "They used to prevent our hearse from parking," he said. The current, nominally civilian government - which is dominated by former generals - remains at times hostile towards his organization, he added. Kyaw Thu's acting career was also curtailed by the government after he donated food to protesting monks during the pro-democratic 2007 protests. Authorities banned his movies until earlier this year. He has since worked on two movies. His funeral service is "not a political organization," he said. "We gave a free funeral to Win Tin and also to the wife of Aung Thaung," respectively a prominent pro-democracy activist, and a former junta hardliner, he said. "We don't distinguish between religions, between enemies and friends. We help all sorts of people.
RELATED TOPICS