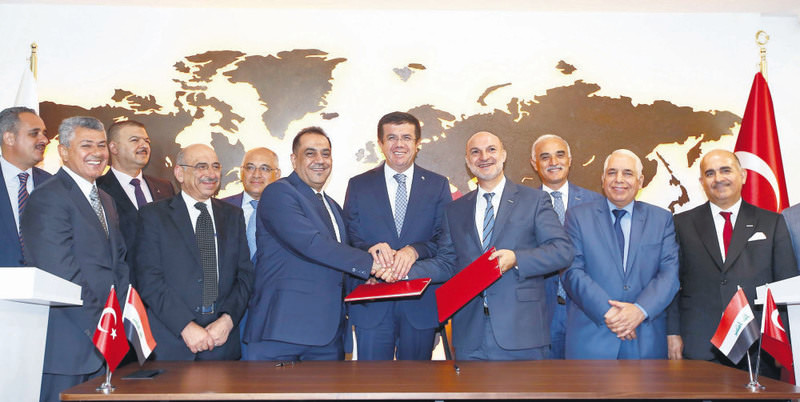 by Betül Alakent Sep 01, 2015 12:00 am
The action plan of the re-established Turkish-Iraqi Business Council has been finalized. As of the first week of December, mutual visits will be made between Turkey and Iraq, which is Turkey's second-largest export market, by government officials and members of the business community. Turkish contractors to whom Iraq is owed a heavy debt will collect their money, then a Turkish-Iraqi free trade zone will be established. In the final step, the number of fairs and events between the two countries will be increased. Turkish-Iraqi Business Council Deputy President Emin Taha said a new era has been opened with Iraq and trade relations would continue to strengthen.

Stating that reformist steps were taken in Iraq and regulations were made on the number of ministries in existence, Taha stressed: "The Iraqi cabinet will change within a few months. In this process, a new government will be established in Turkey. Thus, our trade relations will get strengthened as of December." Emphasizing that they have already started to work to develop trade relations between two countries, Taha said: "We began negotiating with companies. We are learning about their expectations and demands. The biggest problem is that the Turkish construction sector cannot collect its money from Iraqi contracts. We want to solve this problem as soon as possible. We talked with Jaafar Rasool al-Hamadani, chairman of the Iraqi Federation of Chambers of Commerce. They said that they would start to pay their debts as of March 2016 and pay them off by the end of the year."

A free trade zone will be established in 2016, Taha said, adding: "Trade will boom since all the products between the two countries will be exempt from customs tax thanks to this zone." He emphasized that negotiations began to discuss holding joint fairs in order to make trade relations sustainable and long-term.

Taha said trade relations between the two countries were interrupted because of the terror incidents that have occurred over the past two to three months. "[Islamic State of Iraq and al-Sham] ISIS and the PKK terror organizations in the region have caused our exports to drop. However, our exports to Iraq in July increased by 5.4 percent for the first time after a 13-month decline. Export figures this year will reach $10 billion. We think it will rise by 20 percent next year," Taha said. He stressed that he believed terror incidents in the region would end within two years, which would cause exports between the two countries to increase by at least 40 percent. Although Iraq has been Turkey's second-largest export market for the last five years, a huge loss has occurred due to 2015's terror incidents. The country dropped to third place, according to the figures of the first seven months of the year. Turkish exports to Iraq decreased 22 percent from $6.3 billion to approximately $5 billion.
RELATED TOPICS