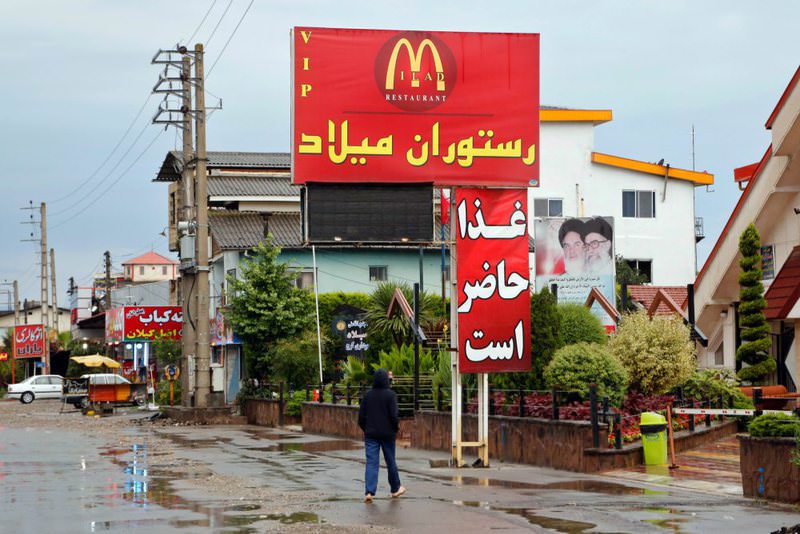 McDonald's is very popular among Iranians, though forbidden from having branches, as it is believed to be a symbol of U.S. imperialism. However, many restaurants use McDonald's logo to attract customers.
by Sep 01, 2015 12:00 am

Would-be foreign investors in Iran should be prepared to share the benefits of their deals, the country's president said, indicating Tehran will impose tough terms that could clash with U.S. regulations

Business delegations from around the world have flocked to Tehran since the July 14 nuclear agreement, which could see international sanctions lifted in early 2016 and open Iran, an energy exporter with a large middle class, to world markets. But President Hassan Rouhani on Saturday suggested foreign investors will be welcome only if they work with a local partner, hire local workers and transfer technology, in some of the most explicit comments to date about the obligations businesses are likely to face. "If foreign companies or countries think they can take control of a market of 80 million people, they are mistaken, and we must not allow it," Rouhani said at a news conference broadcast on state television on Saturday.

"Our policy is that you bring your investment and technology to the country and partner with Iranians, and then a part of the Iranian and regional markets will be within reach of us both and there will be employment for our youth."

Iran has not yet revealed any specific contract terms it will impose on foreign investors. Oil Minister Bijan Zanganeh on Monday said a new model oil contract would be completed in September and introduced at a London conference in December. Rouhani's comments echo those of Reza Norouzzadeh, the chairman of the Industrial Development and Renovation Organization, who earlier this month said companies were "only welcome to Iran's economy through joint investment".

Such requirements are typical in developing economies, but companies could get into trouble in Iran if they accidentally partner with an entity under non-nuclear sanctions or share technology with potential military applications, experts said.

Companies could, for instance, end up linked to the Islamic Revolutionary Guards Corps (IRGC), which controls much of the economy and often hides its financial interests. Much of the IRGC will remain under terrorism-linked U.S. sanctions.

"The risk of investing in a business in which there is either an overt or hidden IRGC interest is probably the single greatest risk facing investors who are exposed to U.S. or EU regulatory regimes," said Nicholas Bortman, partner at risk consultancy GPW.

Farhad Alavi, managing partner of Washington-based Akrivis Law Group, said companies operating in sensitive areas such as aircraft manufacture might have a higher chance of encountering the IRGC.

"The IRGC is known for using front companies ... businesses have to really always look upstream to see who is beneath the surface," he said. Handing over U.S. technology to Iranian firms could also put companies in breach of U.S. regulations, particularly in the case of so-called dual-use technologies with potential military applications.

That could place restrictions on a wide range of complex manufacturing or industrial activities, many of which use U.S. technology or equipment at some point in their supply chain.

"You scratch the surface of a lot of goods and they're made with American equipment or American-origin technology," Alavi said. "U.S.-origin high technology has a very wide domain, and much of this is considered dual use."

Iran has long been a difficult market for investors. It attracted an average of only $1.1 billion of foreign direct investment between 1996 and 2004, before major economic sanctions were imposed on it, according to the United Nations Conference on Trade and Development. FDI has increased since then, but it remains far less than in fast-growing emerging economies elsewhere, because of restrictive labour laws and business rules, red tape and other obstacles.