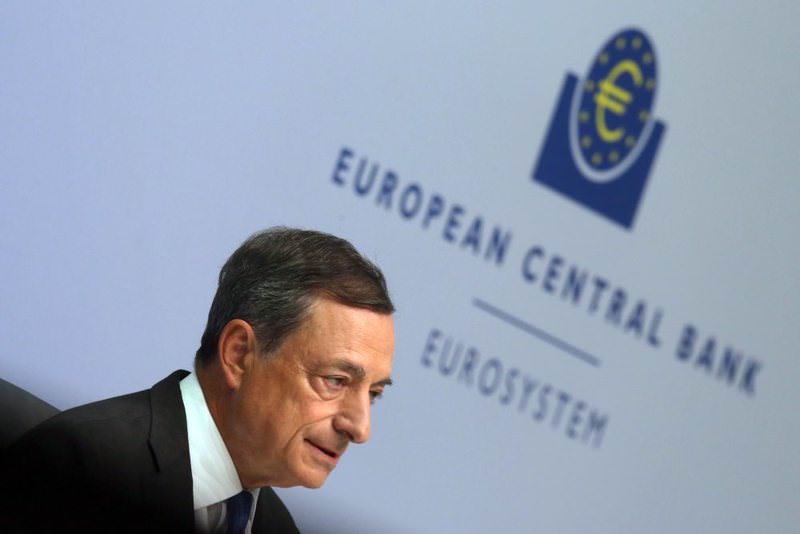 The president of the European Central Bank (ECB), Mario Draghi speaks during an ECB press conference in Frankfurt. The ECB governing council has decided to keep the eurozone base rate at the record low of 0.05 percent.
by Associated Press Sep 04, 2015 12:00 am

The European Central Bank governing council has decided to keep the eurozone base rate at the record low of 0.05 percent, while the bank's president gave the signal for a bigger stimulus to increase inflation and help the economy

The European Central Bank is ready to give the eurozone economy a bigger dose of stimulus should inflation across the 19-country bloc fail to pick up as planned, President Mario Draghi said Thursday. Following the bank's decision to keep interest rates at record lows, Draghi said the ECB can add to its 1.1 trillion euro ($1.2 trillion) stimulus program if needed to raise inflation or help the economy in the face of a global slowdown.

The ECB is pumping 60 billion euros a month in newly printed money into the economy through purchases of government and corporate bonds. The program is slated to run at least through Sept. 2016. Draghi said the program "provides sufficient flexibility in terms of adjusting the size, composition and duration of the program" and that in the meantime the bank "will fully implement" the planned monthly purchases.

The stimulus is intended to help get consumer price inflation back toward the ECB's target of just below 2 percent. In the year to August, it stood at 0.2 percent. Draghi said it could go negative in coming months following the recent drop in oil prices.

The hint at further stimulus, which would inject more euros into the financial system, weighed on the currency and boosted stocks. The euro fell 0.9 percent to $1.1119, while the Stoxx 50 index of leading European shares added to earlier gains, rising 1.9 percent. "The underlying message this gives investors is that certainly for the ECB, the end of monetary stimulus measures are a long way off," said Angus Campbell, Senior Analyst at FxPro.

Draghi's comments came after the bank cut its projections for eurozone inflation and economic growth. The bank trimmed its outlook for annual price increases this year to 0.1 percent from 0.3 percent previously, and for next year to 1.1 percent from 1.5 percent. The ECB also trimmed its growth forecasts for the eurozone due to a slowdown in developing economies. It now expects growth of 1.4 percent this year from 1.5 percent previously, while next year's forecast has been reduced to 1.7 percent from 1.9 percent. "Overall, we expect the economic recovery to continue, albeit at a somewhat weaker pace than earlier expected, reflecting in particular the slowdown in emerging market economies, which is weighing on global growth and foreign demand for euro area exports," Draghi said.

Though fears over the global economy have increased in recent weeks, mainly due to a plunge in Chinese markets, the eurozone recovery appears to have continued during the summer as worries of a Greek exit from the euro have eased. A Greek euro exit, or "Grexit," was one the biggest uncertainties surrounding Europe's currency bloc this year but eased over the past month after the country agreed to a new bailout.

Financial information company Markit said it monthly purchasing managers' index a gauge of economic activity rose to a four-year high of 54.3 points in August from 53.9 the previous month. The increase was also larger than the initial estimate for a more modest rise to 54.1. Anything above 50 indicates expansion. "Although global economic worries have intensified in recent weeks, the calming of Grexit fears has led to an improvement in the business environment across the eurozone," said Chris Williamson, Markit's chief economist. Williamson said the indicator suggests that the eurozone is growing at a quarterly tick of 0.4 percent in the third quarter, ahead of the 0.3 percent rate recorded in the second quarter. Markit's survey was notable for the fact that Spain recorded by far the sharpest growth in economic activity among the top four eurozone nations in August, seeing its second-strongest expansion over the past eight and a half years. Higher growth was also registered in both Germany and Italy but France disappointed again.

Separately, the European Union's statistics agency, Eurostat, reported that retail sales across the eurozone rose by a solid 0.4 percent in July from the month before. The increase was more or less in line with market expectations and more than made up for the 0.2 percent decline recorded in June.

The figures also provide further evidence that the eurozone economy held up during a month of uncertainties. Consumer confidence appeared to be particularly buoyant in Germany, Europe's biggest economy, where retail sales spiked by 1.4 percent during the month. There were no figures available for Greece, which has been struggling with strict controls on money flows, such as limits on daily withdrawals at ATMs, since the end of June.
RELATED TOPICS