G20 governors focus on steps to include refugees in economy 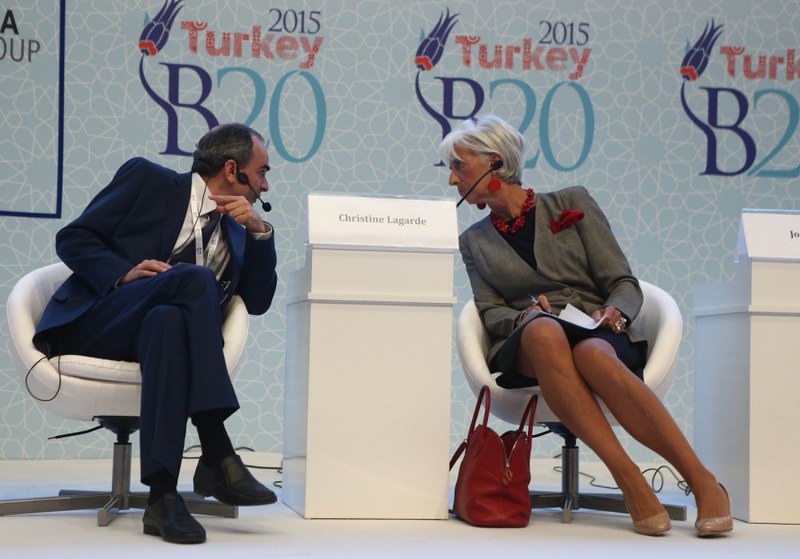 World central bankers gathered in Turkey to grapple with the fallout of slowing growth in China, tanking emerging economies and panicked markets along with refugee issues

Leading names from the global finance world, including the Managing Director of the IMF Christine Lagarde, came together for the Turkey B20 Conference to discuss current economic matters including the outcome of growth, the refugee crises and productivity. IMF President Christine Lagarde presented a picture of the outcome of the moderate growth environment and added that along with more financial support required to trigger growth, steps should be taken for including refugees into economy. The session, "Navigating through the Global Low Growth and Low Interest Rate Environment," was moderated by the Governor of the Central Bank of the Republic of Turkey, Erdem Başçı.

Along with IMF's Lagarde, the Australian Minister of the Treasury Joe Hockey, Governor of French Central Bank Cihristian Noyer, Governor of Mexican Central Bank Agustin Carstens and the Governor of Indian Central Bank Dr. Raghuram Rajan also attended the session. Başçı said that currently investments are low due to monetary policies and also low global growth rate and structural problems. He also compared the Turkish economy to the Brazilian economy right before he left the post to become the governor of the Mexican Central Bank and said that both countries benefitted from the recovery in the U.S. and the European Union's improvement, which has also positively affected Turkey. Lagarde started her speech by mentioning little Aylan, the three-year-old Syrian refugee who was found washed ashore on the coast of Bodrum, Turkey. "If our children are being washed ashore, this means we're losing our humanity and we need to get back to the start, to what we believed in. Our duty in this world is to contribute to the world's stability," said Lagarde. Saying that for any kind of investment to flourish, a stable environment is required; Lagarde said that when monetary policies are involved, there are certain restrictions for public sector investments. She also added that the common ground for the 188 member countries is their fragile economic recovery and low productivity, which affects the quality of growth. She said that credit flow recovery was slow and that while the main reason was to support investments, it took a long time, as there is still a high number of bad debts in Europe. "We need to deal with all these issues. We need to manage bankrupt banks and unpaid debts," added Lagarde.

Investments should be rewarded

Australian Minister of the Treasury Joe Hockey talked about the importance of rewarding investments and that there are various investors who are looking to earn the highest yield with the lowest risk but are restricted by various obstacles such as taxation and by the rules set up by some countries. "We need clear taxing rules. When you increase taking, you dissuade investment and innovation. If we want more people to be involved in capital flow, then we have to minimize the state risks, reward investments and improve innovation in infrastructure," said Hockey.

The Governor of French Central Bank Christian Noyer highlighted the fact that monetary policies cannot solve the problem and other channels are needed to trigger investment and growth. Claiming that low investments are the cause of low growth rates; Noyer said countries should concentrate on various tools that will attract capital and that one of the key reasons for low investments is the lack of clarity regarding regulations and procedures. He also emphasized the importance of taxation and clarity on regulations and procedures and said that R&D and innovation are two fields the investments should be directed to.

Central Banks are not sole actors

Governor of the Mexican Central Bank Agustin Cartens said that the financial sector is the key for global economic recovery and that important steps are required for increasing financial systems. "We can be criticized for putting too much trust in management of macroeconomic policies in the short term, which may have caused these tools' capacity to support to diminish," said Cartens. He also said that time is required for various infrastructure reforms to contribute to growth and therefore, structural growth is not the key in promoting growth. "We have to take the right steps at the right time. Many opportunities arise in the world and we should not miss any," added Cartens.

Claiming that central banks are trapped due to the fluctuations in the foreign exchange rates, the Governor of the Indian Central Bank Dr. Raghuram said that while there is wealth and abundance in the world, there is still economic depression. "Finance supported by central banks has stimulated growth, yet now savings have exceeded investments and investors keep their money in the safest place possible; not investing in real assets. Therefore, the capital flow to developing countries," said Raghuram. He also said that certain adjustments are required in foreign currencies and asset prices as fragility increases and that all countries need to take steps "very quickly" for the global economy to get back to normal.

A joint declaration aiming to increase employment, revive growth and improve working conditions has been signed between the B20 - which represents the employers and businessmen from the G20 member states - and L20, representing the employees. The General Director of the Confederation of Turkish Trade Unions (Türk-İş), Ergün Atalay, representing the workers, Chairman of Hak-İş Mahmut Arslan, the General Secretary of International Trade Union Confederation (ITUC) Sharan Burrow, OECD's Trade Union Advisory Committee's (TUAC) General Secretary John Evans attended the ceremony. The declaration signed by representatives of employers and works underlines that unemployment among youngsters is at intolerable levels and structural measures for solving this problem permanently should be taken to increase the employment rates among young people.
RELATED TOPICS