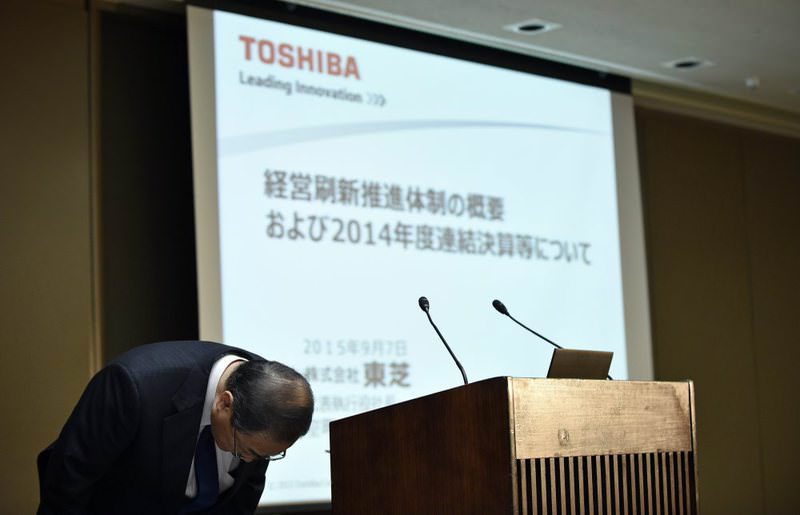 by Sep 08, 2015 12:00 am
Toshiba said on Monday it would book a $318 million annual loss to account for a billion dollar profit-padding scandal that hammered the reputation of one of Japan's best-known firms.

The vast 140-year-old conglomerate revised its results for the past fiscal year to March 2015, booking a 37.8 billion yen ($318 million) net loss that reversed a previously expected 120 billion yen annual profit.

Toshiba's new president, Masashi Muromachi, said the company, which sells everything from vacuum cleaners to nuclear reactors, would restructure certain divisions and overhaul a corporate culture fixated on profits at any cost. "We have caused tremendous problems for investors at home and abroad," he said during a press conference in Tokyo. "The company will work toward recovering Toshiba's credibility."

Earlier yesterday, Toshiba left unchanged its previously announced 170 billion yen operating profit on sales of 6.65 trillion yen for its latest fiscal year. But it said it could not supply forecasts for the current year to March 2016. Investors cheered the revised figures as bringing a sense of closure to the saga, with the firm's Tokyo-listed shares jumping nearly 6 percent at one stage before closing 1.75 percent higher at 352.7 yen. "There is a sense of comfort in that the company was able to get its earnings out," said SMBC Nikko Securities manager Chihiro Ota. He added that other companies dented by accounting scandals, including camera and medical equipment maker Olympus, bounced back after putting out revised earnings. "I suspect Toshiba will take the same course," Ota added.

The new results follow months of delays as an outside panel probed Toshiba's finances in the wake of revelations that top executives pressured underlings to systematically inflate profits by about $1.2 billion since the 2008 global financial crisis.

One of the most damaging accounting scandals to hit Japan in recent years, the case prompted an incumbent president and seven other top executives to resign after the company-hired panel found top management complicit in a years-long scheme to pad profits. The embarrassing findings came as Japan adopted a long-awaited corporate governance code aimed at improving firms' transparency. Muromachi vowed to improve Toshiba's internal controls, but warned that any new system would fail "unless it has real substance." Best known for its televisions and electronics, including the world's first laptop personal computer and DVD player, Toshiba has more than 200,000 employees globally. The company, which holds a shareholders meeting this month, has asked a host of renowned Japanese business leaders to act as outside directors in a management overhaul to improve its corporate culture.

Last month, Toshiba was booted from a stock index launched to highlight firms with the best return on equity and other shareholder-friendly criteria. Toshiba's business was dented by the financial crisis, while the 2011 Fukushima disaster squashed demand for atomic power at home in a big blow to the firm's key nuclear division. Top executives complained of "shameful results" that could not be made public.
RELATED TOPICS