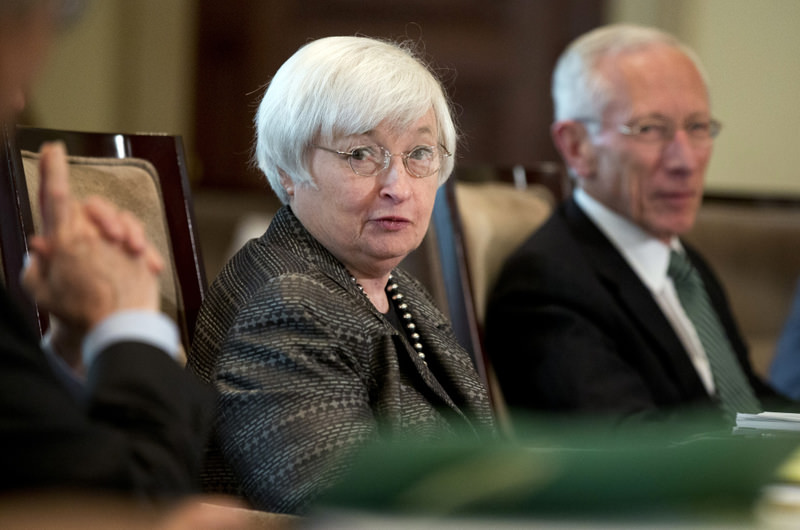 Federal Reserve Chairwoman Janet Yellen is under increasing pressure not to raise interest rates, with most expert predicting a delay until December in light of the weakening global economy.
by Sep 14, 2015 12:00 am

The U.S. Federal Reserve's decision to raise interest rates or not will weigh on all market transactions this week, with China's economic slowdown expected to influence the eventual decision

The U.S. Federal Reserve takes center stage in the coming week, eclipsing industry data from China, another grim inflation reading from the euro zone and rate decisions in Japan and Switzerland.

Guessing whether the Fed hikes rates on Thursday or opts for a later date, perhaps December, is something of a futile exercise because even the rate setters appear to be wavering and the decision will probably come down to the wire.

An unexpected drop in the jobless rate to 5.1 percent and an upward revision in second quarter growth to 3.7 percent support calls for a hike as the labor market tightens and utilization is at its best level since the global financial crisis.

Yet, futures only price a 24 percent chance of a hike as emerging markets, particularly China, struggle, inflation remains benign and some notable Fed watchers, like former Treasury Secretary Larry Summers, argue against a hike.

"My best guess is that the committee is also confused about what the right decision is, and as a result they are waiting to the last minute with making a decision," Torsten Sloek, the chief international economist at Deutsche Bank said.

"The cost of this approach is that market expectations become unanchored but they may view this as a small cost relative to sending strong signals ahead of a meeting where there seems to be limited consensus among (rate setting) members," Sloek said.

China's slowdown is likely to be a key worry for the Fed and a 14 percent drop in Chinese imports over the past year, the 10th straight monthly drop, along with an annual factory gate price deflation of almost 6 percent, does not help rate hike arguments.

Data released yesterday showed growth in China's investment and factory output missed forecasts in August, raising the chances that third-quarter economic growth will dip below 7 percent for the first time since the global crisis. Factory output rose 6.1 percent last month from a year earlier, less than the 6.4 percent expected but up from July's 6.0 percent.

Fears of a hard landing, the prospect of deflation and billions of dollars spent on keeping the yuan steady raise the prospect of more rate cuts and currency devaluation by Beijing, setting markets up for more volatility. In Europe, the key item will be final August euro zone inflation data due on Wednesday, likely supplying another argument for the European Central Bank to beef up quantitative easing.

Price growth is seen holding steady at 0.2 percent, far off the ECB's target of just under 2 percent and ECB President Mario Draghi has already warned that the euro zone could dip back into deflation on lower commodity prices and weaker growth from emerging markets.

The big inflation miss and a modification of quantitative easing are just the latest in a long list of troubles for central banks around the globe as developed nations struggle with weak growth and anemic inflation.

"Are central bankers losing credibility? Preliminary results from our survey show that 68 percent of investors believe so," RBS said in a note to clients. "Yet, we are stuck in a world where central bankers' words will determine investment decisions, often beyond fundamental reasoning."

The Bank of Japan announces its rate decision tomorrow and Governor Haruhiko Kuroda is expected to offer a bleaker view on overseas economies and may lower its assessment on the country's exports next week, sources told Reuters.

Yet the bank already said it was not considering cutting or abandoning" the 0.1 percent interest its pays on excess reserves financial institutions park with the central bank.

The Swiss National Bank is also expected to keep policy steady but markets expect the bank to say that it was ready to cut the deposit rate even further into negative territory if necessary.