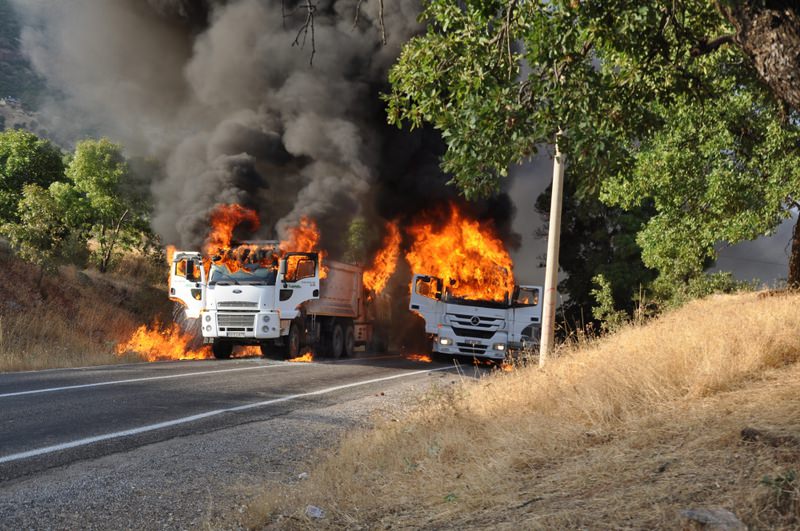 by Daily Sabah with Agencies Sep 16, 2015 12:00 am
With the PKK terrorizing Turkey's eastern and southeastern regions, insurance companies and repayments are also being affected as experts cannot inspect damages at the scene due to security risks, while losses mount. Many insurance companies in the region are based in Van, Urfa and Diyarbakır city centers, and they travel to the surrounding cities and towns to detect the damage wrought by fighting, however, their job is currently much harder due to security concerns.

"Our lives are at stake on our journeys. We change license plates in some provinces; we have to follow military convoys. We are afraid of coming across PKK militants at every corner. There are many burned, undetected vehicles on the roads," insurance experts told Turkish daily Hürriyet. "Some roads are already closed to traffic, and soldiers do not let us pass due to security concerns. We either turn back or wait at that point. When we receive damage reports, we have to call and ask whether there are armed skirmishes. Our biggest concern is to come up against PKK militants [at a checkpoint] and face an identity check." In some urgent cases, insurance firms allow owners of damaged vehicles and shops to send pictures for detection.

Experts add that farmers also come across damaged properties that are the result of fighting, however they are unable to log the damage.

Besides attacks on Turkish security forces, which have claimed 118 lives since July 7, PKK terrorists also target investment projects like dams and power plants in the area, citing military concerns, while around 260 vehicles, including trucks and heavy duty machinery, have been set on fire. Many civilian vehicles have also been targeted in roadblocks erected by terrorists. Offices and shops have been damaged in demonstrations or armed skirmishes.
RELATED TOPICS