Shervin Pishevar: Uber will be worth $200 billion in 5 years 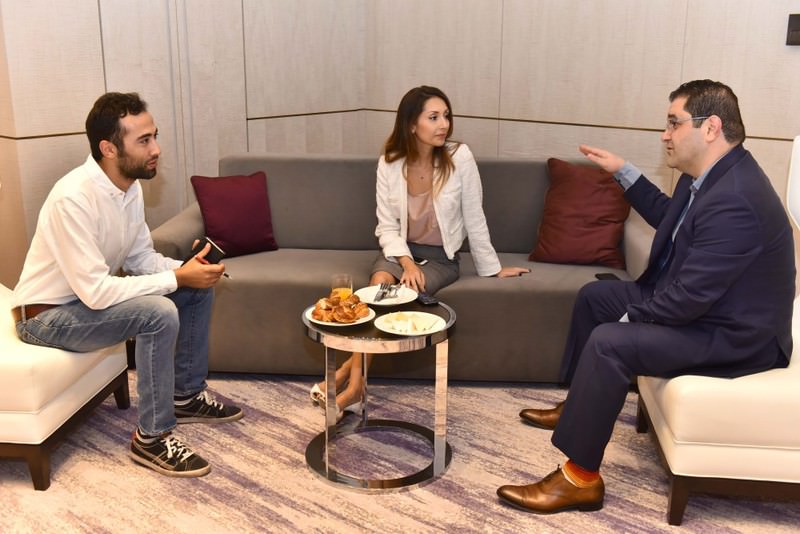 Sabah's Yunus Girgin (L) spoke with Shervin Pishevar (R) regarding angel investors and his latest investment in Uber.
by Yunus Girgin Sep 18, 2015 12:00 am

Shervin Pishevar, one of the world's most prominent angel investors born to an Azeri-Iranian family, said international transportation network Uber, for which he is a major investor, is now valued at $50 billion. Visiting Istanbul for Türk Telekom's PİLOTT Entrepreneurship Summit, Pishevar recalled that the company is only 5 years old. "Five years later, Uber will be valued at $200 billion dollars. We will be a company like Facebook and Google. In the past, we could only see two similar companies every 10 years, yet their numbers increase faster now," Pishevar said, adding that he founded the network by trusting his own instincts.

Pishevar was named "Bill Gates' Worst Nightmare" by the Financial Times, after he said in 1999 that he wants to change global software systems. Now, Pishevar thinks his dream is not reasonable. He did not become Gates' nightmare, but he was frequently mentioned with start-ups he established and companies he invested in. Pishevar's first recommendation for investors is to work fairly. "An investor should not get a 90 percent share of a company after he gave $100,000 in capital support. Otherwise, the investor, namely the entrepreneur, does not see the business as its owner. It becomes an ordinary business for him and entrepreneurship comes to a deadlock and you cannot develop it," he explained.

Underlining the importance of investment in people, Pishevar said those with big ideas and who think big should be supported. "Uber is an outcome of such support. Actually, there is basically no difference in managing IKEA or a stall at a bazaar. You spend the same time for both of them. This is why thinking big requires accomplishing a big task. Thinking small sometimes costs someone dearly," he said.

Pishevar, also the co-founder of Sherpa Ventures supporting investors, said they invest up to $100,000 for an entrepreneurship at an early stage. If the entrepreneurship is successful enough to pass the next stage, more support is offered, he said. "If the business develops, we offer $5 million to $10 million in funds. For the next level, we can invest up to $20 million," he said.

He said the government should pave the way for and support investors and entrepreneurs. The government can reduce taxes and provide materials, funds and advisory units. "Education, science and mathematics are very important. Well-educated engineers must be trained, because if a country cannot develop something on its own, it cannot have a good economy. The history of Turkey is full of big and unbelievable people. The future of Turkey will also be bright," he said.

Pishevar was a child at the time of the Iran-Iraq War and remembers the bombings of Tehran. He said his family left Iran before the revolution broke out. His father was working at a radio station and his mother was a teacher, yet when they went to the U.S. his father started to work as a cab driver. "My mother became a cleaner. I can say I grew up in cabs. This is one of the main reasons behind my investment in Uber," he said.

Since May 2015, Uber is used in 300 cities in 58 countries. Pishevar manages investment tours of many companies including Airbnb, Machine Zone, Fab, Warby Parker, PillPack, Munchery, Beepi, Shyp, Stance, Tumblr and Poshmark. He personally invests in over 60 companies. Among them, Aardvark was acquired by Google, CabanaApp by Twitter, Gowalla by Facebook, Milo.com by eBay, Qwiki by Yahoo and Rapportive by LinkedIn.
RELATED TOPICS