Mobile e-commerce on the rise in Turkey 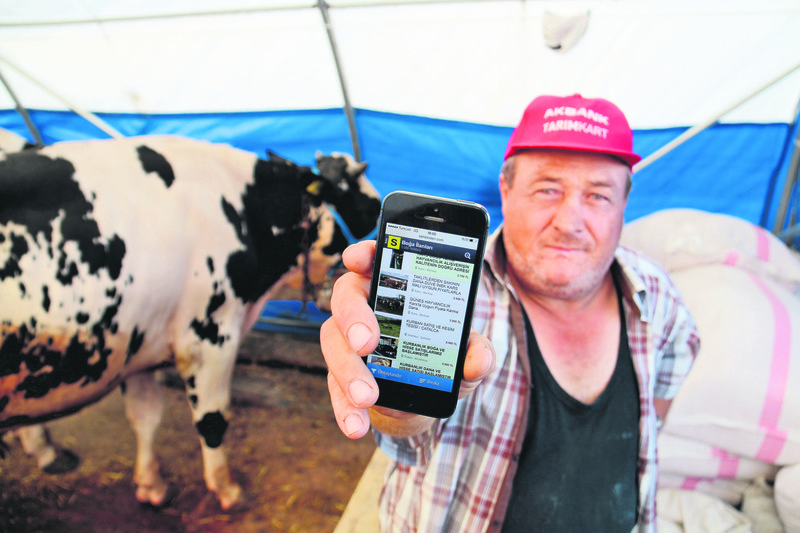 by Anadolu Agency Sep 19, 2015 12:00 am
Bahadır Aydın, 30, a busy executive at a consulting firm, needed to buy a watch, so he looked no further than his smartphone. Working a tight schedule, Aydın had no time to visit shops. But, thanks to the e-commerce platforms available for smartphones, he could shop for the watch while waiting for the bus or in-between appointments. And he found a watch he now loves, a popular brand-name wristwatch featuring a leather strap and square black frame with a silver band. "Shopping on my smartphone made it all possible," Aydın said.

The popularity of mobile e-commerce is rising rapidly in Turkey. According to the online shopping website, hepsiburada.com, one of every two orders is completed through handheld devices while 62 percent of website traffic comes through such devices during weekends and holiday periods.

"In the last year, mobile traffic to 'hepsiburada.com' doubled," according to a statement published on the site.

Burak Ertaş, CEO of Sahibiden.com, another Turkish shopping website, agreed. In an interview with Anadolu Agency (AA), he said the importance of mobile traffic on the site was increasing rapidly. The volume of mobile e-commerce has reached TL 18.9 billion ($6.2 billion) in 2014, according to the Istanbul-based Informatics Industry Association (TUBİSAD).

Mobile e-commerce represents roughly $3 billion in trade volume taking into account that one of every two online transactions are being conducted on mobile websites. German-based market research institute GFK's Istanbul Bureau said last June that during the first five months of this year, more than 4.5 million smartphones were sold. Additionally, more than 11 million smart devices will be purchased in Turkey by the end of this year, according to GFK.

In 2014, the sale of smartphones was 89 percent of total cellphone sales. In 2013, this percentage was 74 percent. Mobile e-commerce is "exploding all over the world," Thomas Husson, a principal analyst at U.S.-based Forrester Research, told AA.

In Europe, mobile and tablet commerce already represents an average of more than 25 percent of online sales, Husson highlighted. China, Japan and South Korea are "mature mobile markets," but Turkey will definitely be part of that group soon, he added. Husson said in some countries like India or Nigeria, mobile traffic has already surpassed desktop traffic. It can easily represent 30 to 50 percent of retailers' and brands' traffic in Europe and the U.S. However, Husson stressed that the huge opportunity lies in influencing sales through a highly developed mobile experience. "In a nutshell, mobile commerce is so much than e-commerce on smartphones."

For example, in a bid to enhance the mobile experience, hepsiburada.com began alerting users through apps for special offers and discounts. Also, users can also search a product they see in-store through the app to compare prices online.

Ertaş said his company tried to enhance the mobile experience by frequently updating apps to offer users more features. "We invest a lot in the mobile experience," Ertaş said, although he declined to discuss figures. The company has recently allowed users to post advertisements through mobile apps as well.

As Turkey recently completed a tender for 4.5G networks, which are set to go live next April, online companies expect to be able to provide expanded access and commerce through mobile channels.

"It is going to boost this ongoing trend," Ertaş said.

Husson also forecasted that higher connectivity will pave the way for retailers to provide more personal and customized service to consumers. "People now have huge expectations that they can be served through a mobile experience, depending on their immediate context and time of need," Husson said.
*Tuncay Kayaoğlu
RELATED TOPICS