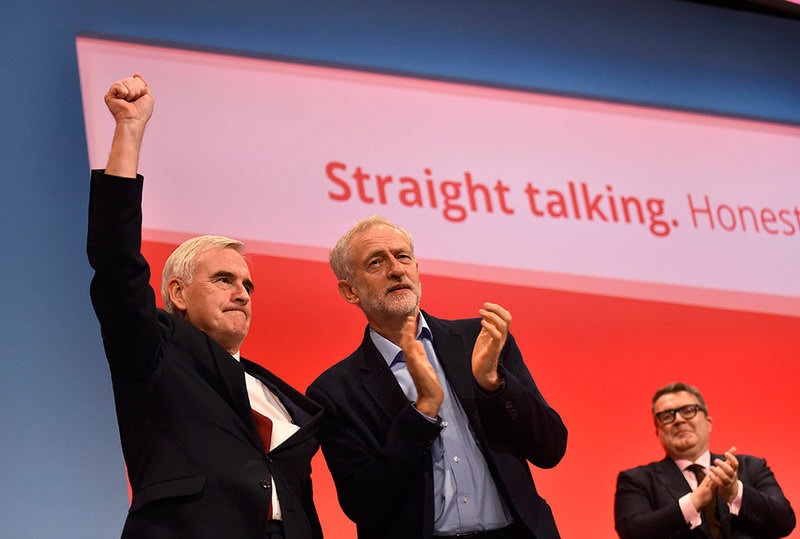 by reuters Sep 28, 2015 12:00 am
Britain's opposition Labour Party said on Monday if it wins the next election it would force large corporations such as Starbucks, Vodafone, Amazon and Google to pay their "fair share" of taxes to help end austerity policies.

In a speech aimed at silencing critics who say Labour has moved too far left under its new leadership, finance spokesman John McDonnell largely struck a more moderate stance than previously on central bank independence and taxing financial transactions.

But he said the party, led by veteran lawmaker Jeremy Corbyn, would be "aggressive" in balancing the books, ensuring spending cuts do not hit middle or low earners while attacking the "corporate welfare system" of tax incentives for companies.

"Labour's plan to balance the books will be aggressive," he told his party's four-day annual conference in the southern city of Brighton.

"We will force people like Starbucks, Vodafone, Amazon and Google and all the others to pay their fair share of taxes," said McDonnell, a hard-left former trade unionist who has in the past advocated renationalising banks and imposing wealth taxes.

His comments, which received a loud round of applause, would mean taking on some of the biggest global corporations and could worry business leaders who see Labour under Corbyn as a threat to the economy.

Labour was soundly defeated in the last parliamentary election in May after most voters backed the ruling Conservatives as the most trusted party to run the economy.

"We need to prove to the British people we can run the economy better than the rich elite that runs it now," he said.

McDonnell had promised to deliver a "boring speech" to the conference, apparently aiming to present a more moderate stance than some of his earlier statements might have suggested.

For a man who lists the overthrow of capitalism among his interests in the Who's Who directory of influential people, McDonnell stuck to the script and tried to ease concerns over his party's policy on the central bank and taxes.

Global companies often face with criticism due to corporate taxes paid in countries of operation despite high levels of income.

In 2012, Starbucks was heavily criticized as a report suggested that it paid only £8.6 million in 14 years despite generating over £3 billion in sales in the same period.

He also did not mention by name Corbyn's idea of "people's quantitative easing", printing money in an economic downturn to invest in infrastructure projects.

Some economists have supported the idea, saying it could help boost public investment, while others, including the central bank governor Mark Carney, have warned about changes to policy that could spur inflation.

"Let me be clear that we will guarantee the independence of the Bank of England," McDonnell said, aiming to calm fears after he had called for the government to reclaim the power to set interest rates.

He said Labour would consider expanding its inflation-targeting mandate to include economic growth, employment and earnings, in what would be the first such change in 18 years at the BoE.

If elected in the next vote due in 2020, Labour would also launch a consultation on introducing the so-called Tobin tax, which would tax financial transactions, but would only act if there was consensus on the idea, he said.

McDonnell gave few firm details of his policies, but said he would concentrate on the general goal of spurring growth to end austerity policies which he said were punishing the most vulnerable and the poorest in Britain.

"Austerity is not an economic necessity, it's a political choice," he said, taking aim at the Conservatives who he accused of representing only the top one percent of Britain's population.