MÜSİAD head: Turkey's only solution to escape from the middle income trap is high tech 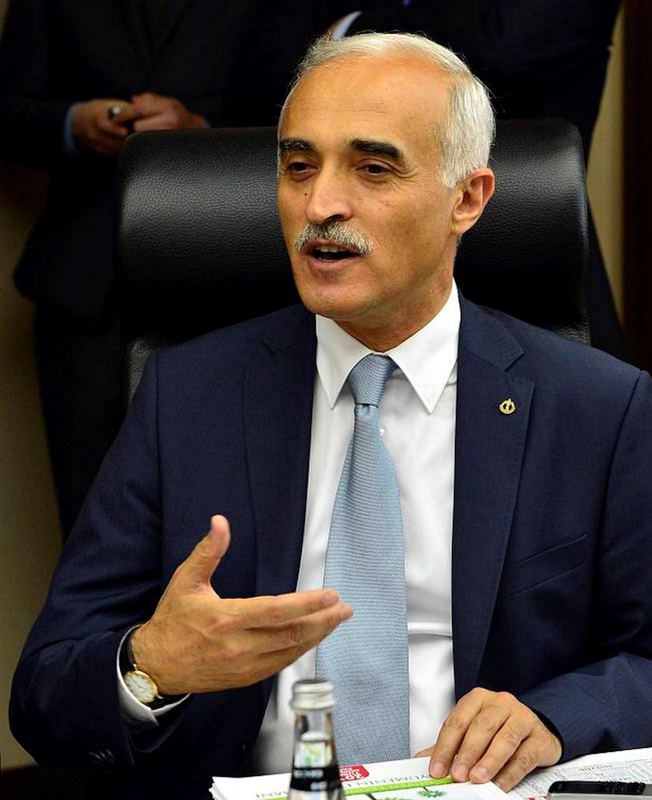 In an exclusive interview with Daily Sabah, the chairman of Independent Industrialists' and Businessmen's Association (MÜSİAD) Nail Olpak, said their main aim in organizing the High Tech Port technology fair is to contribute to the growth of Turkey's economy and to move from the middle to high-income bracket. We discussed the project's future with Olpak

Daily Sabah: What is the target of High Tech Port by MÜSİAD project?

Nail Olpak: High Tech Port by MÜSİAD is one of the visions our association has implemented to get Turkey out of the middle income trap. It was organized in order to enhance the knowledge of high technologies and to protect national technologies. The initiative brings together investors, manufacturers, project owners, Turkish and international businessmen, related government institutions and bodies while promoting national technologies in the international arena.

With this project, we will try to increase income per capita from the $10,000-level, which is accepted as the middle income trap level in Turkey, to $25,000. Development is only possible by creating added value through high tech processes. In this respect, the achievements the defense industry have experienced within the last 10 years will be used for promoting these technologies to allies and friend countries. MÜSİAD is focusing on lot of new areas which might be beneficial for Turkey.

D.S.: What is the definition of this middle income trap and what is the role of High Tech Port in getting out of this trap?

N.O.: We need to evaluate this from a wider angle and consider the whole of Turkey. MÜSİAD's research in 2012 actually reported that the main obstacle standing in between Turkey and development is the Middle Income Trap. There are many examples of this trap in the world as many developed countries could escape this trap within 30 years or more, except South Korea and Taiwan. They have accomplished it within 17 to 18 years. There is only one exit from this trap: A Fast and Fair State of Law that is based on advanced technologies, production with added value and values education. In 2014, our average exports per kilogram was around $1.3, while the average for areas such as high tech, aviation and defense industries is around $23. Therefore, one of the most important formulas for getting out of this trap is transforming into a more high tech one.

Why did you choose Qatar for the event?

Qatar is a small but an important country with a population of 1.3 million people, most of whom are expats. It has the 4th largest natural gas reserves in the world. It achieved its independence in 1971. Our relations with Qatar started developing in 2005 and now those in charge of politics are working in a very amicable and compatible manner. This compatibility is extremely important and it first requires compatibility between the political authorities, and then it will be followed by the business world. Further, both the defense industry and strategic software one are investments that are shared by the governments. Therefore, we chose Qatar as it is a transition point to the Gulf.

First of all, if you are aiming to build long-term cooperation, you have to convince the Gulf region with your business model first. So, when they sit down with you they're going to realize that they will win with you and be convinced. Secondly, after the business model, your company needs to be transparent and open and easily audited by international audit firms. You can only win in Qatar after you establish these. Only after you convince them that they will be winning as well with the correct business model, you can win.

We need to administer this process correctly. When our firms are trying to enter the region, they need to take the regional facts into consideration and build business models that are sound. Each company needs to produce business models that are suitable for their own capabilities. However, we also need to be aware that the Middle East and the Gulf are not alike. The Gulf region is composed of 6 very advanced and professional countries, which are aware of where to invest to and their requirements. They know how to choose the right things and their R&D are highly advanced. Most critical companies are run by the British or the Americans. 92 percent of the economy is run by the state, which means they are administering the whole market. This has been a successful model for them and they have reached an income of $200 billion per year. They are transacting around $2 trillion a year. Qatar's investment in the defense industry is an important opportunity in terms of the development of mutual relations. Turkey also has success stories such as Pozitron, Digitürk, et cetera.; however, our firms still need a valid business model and more patience.

What is the future projection of High Tech Port by MÜSİAD?

Our next target country is Saudi Arabia and therefore, we're working for getting into that market. In accordance with our meetings and negotiations with the Undersecretariat of Defense Industry, the same fair will be held next year in Saudi Arabia.

High Tech Port by MÜSİAD is a result-oriented, business development and marketing project of MÜSİAD. It is a crucial platform for business development from state to state. Our vision is: Those who control technology will be ruling the world and be strong. The method of Turkey and similar countries from getting out of the Middle Income trap is using high technology. The project will offer the chance to create Joint Ventures with active funds in the Gulf Region. It will also help improve the current commercial relations and investments with the Gulf countries and business and communication networks will expand.

Our aim is to reveal that Turkish defense industry can meet the technology requirements and needs of the Middle Easter and Gulf counties, and that Turkey can be a player in the competitive market.

What is the Qatar market like and what should be the stance of Turkish companies in this market?

There are many big partnership and business opportunities for our firms in Qatar. We still have many companies doing business there. Turkish firms are very talented and they are also some of the leading companies in the defense industry's software and hardware services just like they are in other sectors. The 2022 FIFA World Cup will be held in Qatar and required $170 million infrastructure and superstructure investments. Therefore, the operation and infrastructure for IT is required for the new buildings to be built. This is an area where Turkish companies can thrive and Qatar has established a website in this respect and is collecting all companies that want to provide services all together on this website.

We are meeting up with all our investors and underlining that they have to be patient as Qatar has a great financial power and we need to reply to their requirements in the correct manner. Therefore, business modeling is an area that needs to be considered by all companies.
RELATED TOPICS