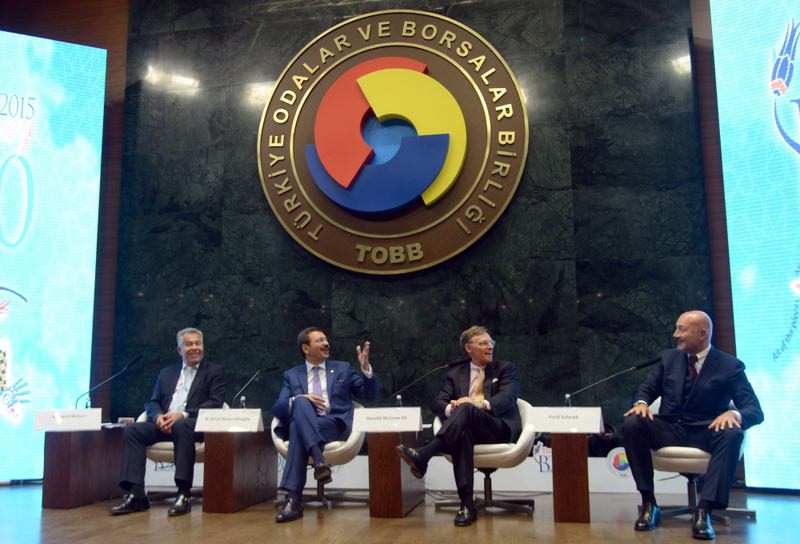 by daily sabah
Oct 19, 2015 12:00 am
The Association of European Chambers of Commerce and Industry (EUROCHAMBERS) was elected the Turkish Union of Chambers and Commodity Exchanges (TOBB) as the group's vice president. Previously, Germany, France, Italy, Spain and Poland were selected for the vice presidency and this is the first time a non-EU country has been elected for this position. The decision was passed unanimously and it was considered a "revolution" for EUROCHAMBERS. Turkey will hold the vice presidency beginning in 2016 and this is the first time Turkey will have the same status as leading EU countries.

EUROCHAMBERS, which aims to represent, serve and promote the European Chambers of Commerce and Industry through lobbying, development of projects and services to members, has been restructuring starting from 2011, when the euro crisis hit, and steps have been taken since then that were approved by the EUROCHAMBERS general assembly on Oct. 16, 2015. EUROCHAMBERS is still the largest business organization in Europe with 1,700 local and regional chambers from 44 countries, and it represents around 20 million businesses.

About this prestigious development, TOBB Chairman M. Rifat Hisarcıklıoğlu said he is very proud of the Turkish private sector. He added that this decision provides concrete evidence that Turkey's efforts to integrate with the European economy have been successful.

Hisarcıklıoğlu said during EUROCHAMBERS' first restructuring period in the 1990s, Turkey and the TOBB could not find a chance to get an important position. He also added that thanks to efforts by TOBB, the Foreign Affairs Ministry and Turkish ambassadors Turkey finally has got a very important position. "During the restructuring of EUROCHAMBERS in the last period starting from 2011, with the advantage of being the vice president, we will be involved in the work directly. We will be involved in every step of the restructuring process and we will have the chance to give our opinions," Hisarcıklıoğlu said. He also underlined that this is a great success for a country that is not an EU member and thanked everyone who was involved.
Last Update: Oct 19, 2015 2:02 am