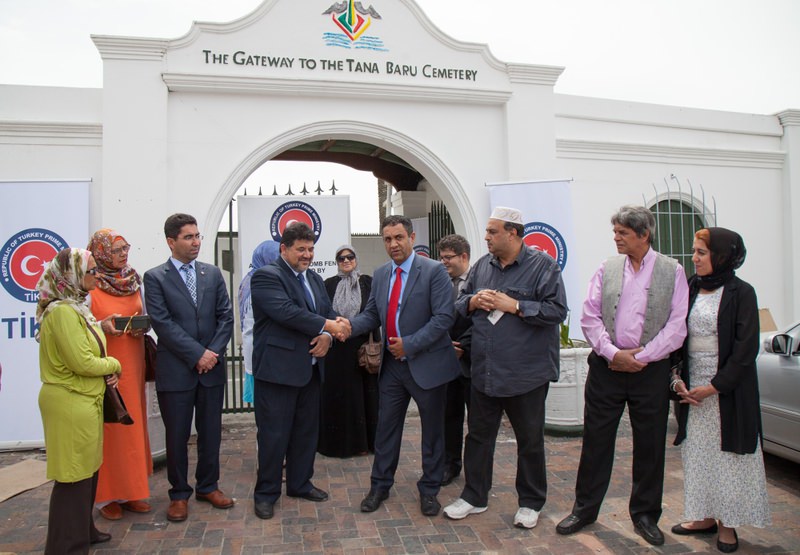 by Daily Sabah with AA Nov 02, 2015 12:00 am
The Turkish Cooperation and Coordination Agency (TİKA) has completed three development projects in Cape Town, South Africa that further cement the historical ties between Turkey and the southern African country. TİKA expert Ahmet İzzet Bozbey told Anadolu Agency (AA) Saturday that renovations of the Noor el-Hamidia Mosque and Abu Bakr Effendi's gravesite were now complete. TİKA also donated alarm systems, cricket nets and an electronic scoreboard to the Ottoman Cricket Club. The TİKA delegation, headed by Windhoek Coordinator Cüneyt Esmer, accompanied by Windhoek Deputy Coordinator Zübeyir Yakaryılmaz and Bozbey, arrived in Cape Town Friday to attend a ceremony to mark the completed projects and concluded their visit on Saturday. Noor el-Hamidia Mosque hosted the TİKA delegation for Friday prayers after which Esmer also addressed members of the Muslim community that had gathered there. "We are very honored to be here and very proud of our relationship with Noor el-Hamidia. These moments connect our two countries through timelines of the past and present," he said. Noor el-Hamidia Mosque was established in 1881 by two South African students of Ottoman scholar Abu Bakr Effendi. Mosque Chairman Imtiaaz Hashim emphasized how much he appreciated TİKA's efforts. "There were many repairs done, such as to the ablution facilities, interior and exterior painting," Hashim said.

The 133-year-old Ottoman Cricket Club organized an event Friday evening, and thanked TİKA for its $40,000 worth of renovations. Ottoman Cricket Club Chairman Fareed Abarahams said: "We maintain strong heritage links to Turkey, and we have been preserving them all these years." South Africa's colonial and apartheid history saw sports take on an integral role of not only recreation but a platform to struggle for freedom. The Ottoman origins of the club highlight Abu Bakr Effendi's imprint on South African society. "Slaves organized sports among themselves during the years of apartheid. The name of the club was derived from the Ottoman Empire. Two of Abu Bakr Effendi's students started this cricket club back in 1882," Ottoman Cricket Club President Rydwaun Salie told AA.

The TİKA delegation also visited Abu Bakr Effendi's gravesite where they sponsored a 183-meter perimeter fence. The Tanu Baru Trust received a key from TİKA as a symbol of strengthening ties between the two institutions. "Ten years ago, [President Recep] Tayyip Erdogan was here. He came here to Abu Bakr Efendi's grave and he introduced us to TİKA's president. Erdoğan said it was Turkey's duty to fix this area," a descendant of Abu Bakr Effendi, Kamaal Effendi, said.
Last Update: Nov 02, 2015 1:20 am
RELATED TOPICS