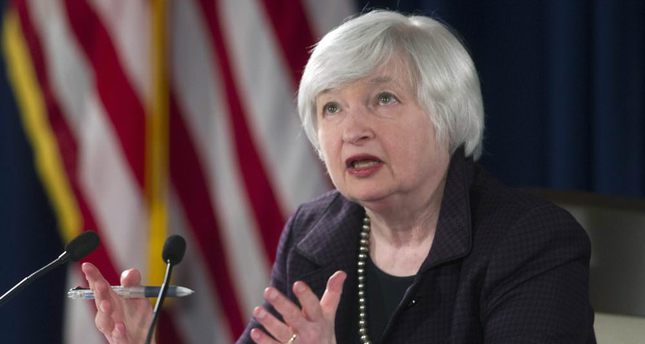 After U.S. employment data was announced, which saw the unemployment rate hit a seven-year low of 5 percent, markets have already started pricing the rate hike as seen in the lower BIST100 index and weaker TL

U.S. hiring roared back in October after two weak months, with employers adding a robust 271,000 jobs, the most since December. The unemployment rate dipped to a fresh seven-year low of 5 percent. The burst of hiring across a range of industries came as companies shrugged off slower overseas growth and a weak U.S manufacturing sector. Big job gains occurred in construction, health care and retail. Healthy consumer spending is supporting strong job growth even as factory payrolls were flat last month and oil and gas drillers cut jobs.

The job gains are likely strong enough to persuade the Federal Reserve to lift short-term interest rates at its next meeting in mid-December.

Any gain above roughly 150,000 was expected to keep Fed policymakers on track to raise interest rates from record lows at their mid-December meeting.

Continued hiring should continue to reduce the unemployment rate over time. The economy typically needs only about 100,000 jobs a month to keep the unemployment rate from rising. That figure has fallen in recent years as the aging population and increasing retirements by baby boomers have slowed the growth of the U.S. workforce.

More recent data suggest that global turmoil and manufacturing's rough patch haven't hurt the entire economy. Consumers, the biggest driver of the U.S. economy, are still spending at a healthy clip, supported by lower gas prices and a recovery in the stock market. The economy grew at just a 1.5 percent annual rate in the July-September quarter. The slowdown occurred mostly because businesses cut back on their stockpiles, and exports weakened.

Still, Americans boosted their spending at a healthy 3.2 percent annual pace, down just a few tenths from the second quarter. Solid consumer demand has encouraged many services firms, which make up roughly 80 percent of the economy, to step up hiring.

A survey by the ınstitute for Supply Management found that companies in the health care, retail, financial and transportation and warehousing industries all added more jobs in October than in September. Overall, services firms expanded last month at the fastest pace in three months. That's in sharp contrast to the ISM's survey of manufacturing firms, which barely grew in October.

Federal Reserve Board Chair Janet Yellen and other leading Fed officials have said that the economy is generally healthy and that the December meeting is a "live possibility" for a rate hike.

Meanwhile, the Turkish lira lost value before the announcement of U.S. nonfarm payroll data, which may make an interest hike more likely in December. The lira lost some of the gains it had acquired in the political stability of the post-election period. In the middle of the day, the lira weakened against the dollar by 0.8 percent, bringing the lira-dollar parity above 2.88. The demand for assets in lira remarkably increased in the beginning of the week, following the Justice and Development Party (AK Party) capturing enough votes to form a single-party government. However, the gains from these assets in lira began eroding after the probability that the Fed's first interest rate hike takes place in December rose to 56 percent. Due to the same reasons, the Borsa Istanbul's BIST 100 index was down at the close of the first session on Friday in contrast to its upward trend in the beginning of the week. The benchmark index lost 131.77 points to close at 82,823.90. Stocks on the index lost 0.16 percent of their value while the total trading volume was TL 1.2 billion ($412.24 million). The BIST 100 index was also down again at the opening of the second session on Friday. The benchmark index decreased 135.45 points to open at 82,688.45. Stocks on the index lost 0.16 percent of their value as in the first session. Moreover, immediately following the announcement, the lira-dollar parity went above 2.90 while the BIST 100 index fell to 81, 900.
Last Update: Nov 07, 2015 1:23 am