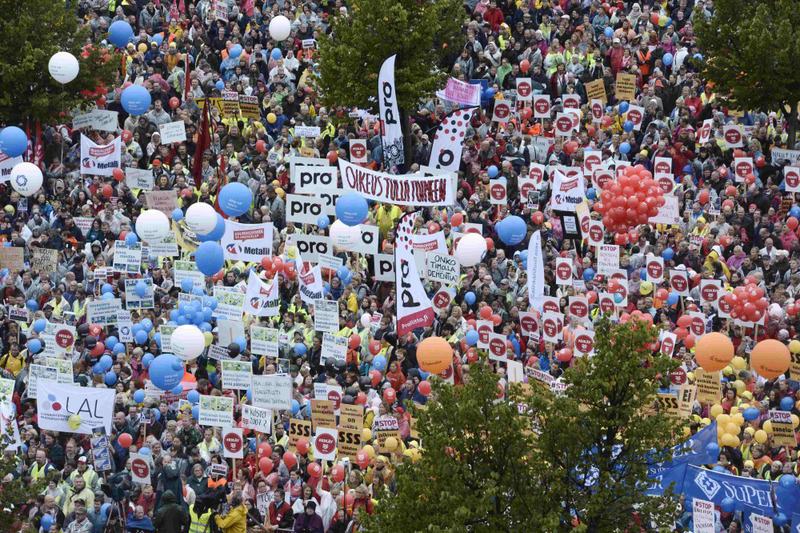 Efforts by new Prime Minister Juha Sipila to cut holidays and wages have been met with huge strikes and protests
by reuters
Nov 12, 2015 12:00 am

Finland, which was one the most relentless critics of Greece during its debt crisis, now struggles to revive its economy through reforms to boost growth and end its three-year recession

Finland was one of the toughest European critics of Greece during its debt crisis, chastising it for failing to push through reforms to revive its economy. Now the Nordic nation is struggling to overhaul its own finances as it seeks to claw its way out of a three-year-old recession that has prompted its finance minister to label the country the "sick man of Europe".

Efforts by new Prime Minister Juha Sipila to cut holidays and wages have been met with huge strikes and protests, while a big healthcare reform exposed ideological divisions in his coalition government that pushed it to the brink of collapse last week. There have even been calls from one of Sipila's veteran lawmakers for a parliamentary debate over whether Finland should leave the euro zone to allow it to devalue its own currency to boost exports - a sign of the frustration gripping the country.

In the latest manifestation of the difficulties of cutting spending in euro zone states, Sipila is walking a political tightrope. He must push through major reforms to boost competitiveness and encourage growth, while placating labour unions to avoid further strikes and costly wage deals next year - and carrying his three-party coalition with him.

Unemployment and public debt are both climbing in a country hit by high labour costs, the decline of flagship company Nokia's phone business and a recession in Russia, one of its biggest export markets. And with a rapidly-ageing population, economists say the outlook is bleak for Finland, which has lost its triple-A credit rating and is experiencing its longest economic slump since World War II. Sipila - who has warned Finland could be the next Greece - is pushing for 10 billion euros ($10.8 billion) of annual savings by 2030, including 4 billion euros by 2019.

As part of this the government, in power for five months, plans to overhaul healthcare, local government and labour markets to boost employment and export competitiveness.

But the premier's call for a "common spirit of reform" was met with uproar when he proposed cutting holidays in the public sector and reducing the amount of extra pay given to employees working on Sunday to lower unit labour costs by 5 percent.

About 30,000 protesters rallied in Helsinki in September in the county's biggest demonstration since 1991, and strikes halted railroads, harbours and paper mills. The government soon backtracked, saying it would find savings from other benefits.

The average Finn works fewer hours a week than any other EU citizens, according to the Finnish Business and Policy Forum think-tank. The government estimates Finland has fallen 15 percent behind Germany and Sweden in labour cost competitiveness, resulting in a loss of global export market share.

Disagreements over cost cuts in the healthcare system last week threatened to break up the coalition government, before an agreement was reached. "The recent course of events makes the outlook even more negative, and supports the arguments for Finnish bond yields to approach French levels going forward," Nordea said in a note.

Finnish benchmark 10-year bond yields are at 0.89 percent, compared with French yields at 0.97 percent. The squabble exposed the fault lines in Sipila's three-party coalition representing conservative rural voters, urban technocrats and anti-immigrant populists. Sipila may be keen on reform but faces opposition from conservative members of his own Centre Party. The National Coalition party, led by Finance Minister Alexander Stubb, is reformist, but the Finns party leans to the left in fiscal policy and is having tough time agreeing with austerity. Stubb's frustration was evident when he said in September: "Basically, we are the sick man of Europe."